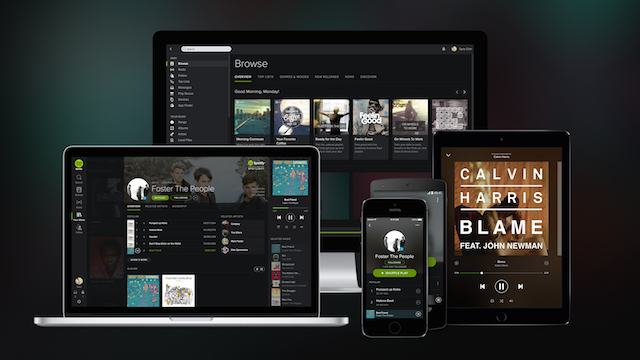 You may enjoy Spotify’s free music streaming, but the major record labels want to make Spotify’s free service a less attractive option, or in an ideal world, do away with it altogether. The Financial Times reports that Universal Music Group, the world’s largest music company, is using its license negotiations with Spotify to push for changes to Spotify’s free service. Universal is arguing that the free version of Spotify isn’t distinct enough from the paid subscription, and is reportedly pushing Spotify to modify the free version of its service by capping the amount of time that it can be used.

Spotify users can currently listen to as much free, on-demand music as they want for an unlimited period of time, though they can’t choose tracks on its mobile app or save music to listen offline, resulting in a more randomized service. Paid subscribers don’t hear ads and get access to higher-quality streams and offline music. The label hopes that changes to Spotify’s free service would convert more free users into paid subscribers. VentureBeat notes that the move comes after a report from Billboard that showed that Spotify was the driving force behind Universal’s 75% jump in streaming revenue for 2014.

The heads of all three major music labels have said there isn’t enough difference between the paid and ad-supported versions of freemium streaming services. Industry sources told Rolling Stone, “We need to accelerate the growth of paying subscribers — that’s a slightly more positive way of saying we need to limit free.” The source explained that companies like Spotify would have two choices: changing the free version or improving the paid version.

“You can make the subscription service more attractive, with high-resolution sound or exclusive albums, or you can make the free version worse, by limiting the amount of stuff you can listen to.” The Verge notes that labels could seek to limit the amount of music that users can listen to without paying, or even try to limit all free streaming to Pandora-like radio stations instead of on-demand music.

In the past, labels have been supportive of free streaming, and saw it as a way to bring new customers into a declining industry. But they are becoming less and less comfortable as streaming grows and money continues to shift away from digital downloads and physical media. Digital downloads, which were a reliable source of revenue for the past decade, have now peaked and are in steady decline. Meanwhile, revenues from streaming have eclipsed CD sales and are fast approaching downloads as the largest source of revenue for the music industry in the United States.

A source close to Universal told the Financial Times that there was clear evidence that the availability of free music on Spotify is hurting downloads from stores like Apple’s iTunes. “The market data really speaks for itself,” the source said. “It’s clear that the key to success for artists, consumers and Spotify alike is developing an offering that drives more free users to the paid tier.”

Even more streaming services are on their way as tension within the music industry heats up. YouTube is one of several companies that will bring streaming services to market this year. The site has 1 billion visitors each month, says it has paid more than $1 billion to music labels “over the past few years,” and is working on its own paid subscription service. And Apple will soon launch the streaming service it’s been reconfiguring since it acquired Beats Electronics last year. There will not be a free tier in the service, and Apple has reportedly been in talks with top artists and managers regarding the possibility of signing them to exclusive deals.

Spotify has resisted past pressures to change the free version of its service, saying that doing so would slow the conversion of free users to paying subscribers and perhaps even send those users to pirated music or free sites such as YouTube. It also rejects the idea that the ad-supported tier of its service is responsible for declines in downloads, and says that instead, the service is “monetising people who have never been monetised before.” It says that only 12% of former iTunes users are on Spotify, and of that number, more than 40% subscribe to Spotify’s paid tier.

Universal hasn’t commented publicly on its licensing negotiations with Spotify. But Rob Wells, president of Universal’s global digital business and a known supporter of Spotify’s freemium model, left the company recently, while Lucian Grainge, its chief executive, has begun to speak out about the limitations of ad-supported music streaming.

Other labels have taken a different approach. Sony Music, the second largest music group, hasn’t clashed with Spotify, though its chief executive, Doug Morris, has been critical of free music services. Warner Music’s chief executive has also recently expressed doubts about free streaming. It’s not known whether Sony Music or Warner Music is trying to pressure Spotify or other services through licensing negotiations, but a source tells Rolling Stone that “artists and labels are unified about their skepticism of the model. You can’t have a service that’s unlimited, ad-supported, free. Every other service — Sirius XM, Netflix — doesn’t offer its product unlimited, for free, in any context.”

A major issue for labels and artists is the rate that Spotify pays per stream. Rolling Stone reports that Spotify pays out more than 70% of the revenue it earns from subscriptions and advertisements to artists, labels, and song publishers. That means that artists often split a “minuscule” $0.006 to $0.0084 per stream with their labels. Major-label executives have predicted that the freemium model could disappear from Spotify and other streaming services by the end of this year, though Spotify disagrees. Gary Stiffelman, a music industry attorney who has represented artists from Michael Jackson to Lady Gaga, tells Rolling Stone, “It’s inevitable. If you want Spotify to pay more per listen, they have to charge more.”

But criticism of Spotify’s business model fails to account for the fact that Spotify has been more successful than other music services at converting users from free to paid. Spotify has used its freemium model to amass 60 million users and 15 million paying subscribers. Mark Mulligan, an analyst with MIDiA Research, says Spotify is better than most other services at converting free users to paying customers. Pandora, the streaming radio service, has 80 million free users and 3.5 million paying subscribers, he says, while YouTube has 1 billion users and barely any paid users.

Quartz’s John McDuling describes the dispute over the freemium model as the music industry trying to battle the Internet — a fight they’re sure to lose. The major labels think that if they succeed in taking away the free services that millions of consumers have adopted, then those same consumers will cough up the money for the premium versions. Spotify thinks that turning consumers who grew up with file-sharing services — and therefore have been conditioned to expect free access to music — is a delicate process.

The growth of Spotify’s paid service depends heavily on the free option, and that strategy seems to be working.  Spotify says 80% of its 15 million paying subscribers started out as free users. And Jonathan Prince, Spotify’s head of communications, tells Quartz, “The idea [that] you would talk about cutting off a free service that has a clear proven path to subscriptions, when you have all these other free services out there, it just doesn’t make any sense to us.”

If Spotify fails, that could hurt record labels, who not only hold equity in Spotify but also benefit from the royalties it generates. Internal emails recently leaked to the New York Post showed that Spotify expects to pay Universal $1 billion in royalties over the next two years. By 2017, it claims that it will account for 39% of the label’s pre-tax earnings, up from about 28% currently. These figures raise the question of why labels would want to mess with a company that’s quickly becoming their most important revenue stream.

If the major record labels succeed in shutting down free music, it seems unlikely that consumers will suddenly begin buying CDs or digital downloads in record numbers. It’s possible that they will turn to paid streaming, but it’s also plausible that they’ll return to piracy. If Spotify has figured out a model for bringing former users of file-sharing services into the world of subscription music services, and converting them into paying customers, record labels should probably tone down the hostility and choose a different strategy.