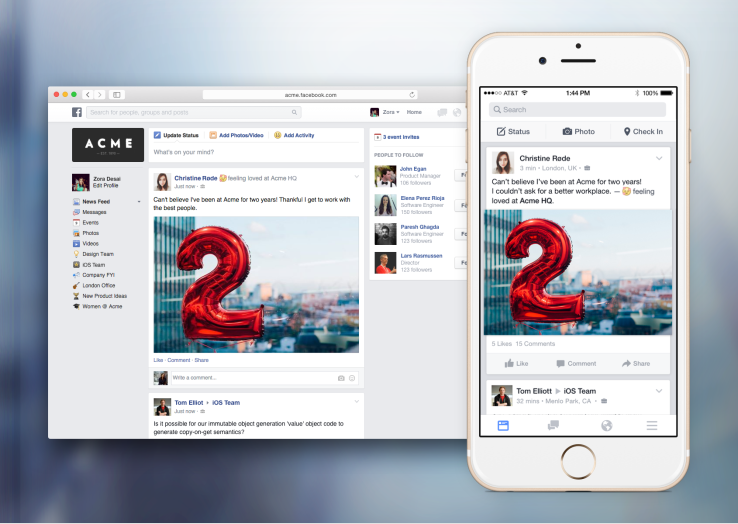 The world’s largest social network launched Facebook At Work, a collaboration and communication app, on Wednesday. The app is aimed at small businesses with 100 or more employees. Based on reports, it seems that the app’s look, feel, and feature list is fairly similar to Facebook’s flagship product. Thus, Facebook’s professional avatar has a news feed, groups (which the company said were intended to eliminate tedious email lists), events etc.

Back in November, when the Wall Street Journal reported on the topic, several experts and users were apprehensive about privacy issues in the app. In a nod to their concerns, the Palo Alto-based company, which has repeatedly come under fire for its privacy practices, has adopted a no-tracking approach for this product. In addition, Lars Rasmussen, Facebook’s director of engineering and brains behind the product, says there will be no ads in Facebook at work (although he refused to exclude their possibility down the line). According to him, users can also link work and personal accounts together so that they are logged into both accounts at the same time.

The main difference, in this case, is the user interface. Unlike its personal avatar, Facebook’s professional avatar will have a white border and color schema instead of a blue one.

Facebook’s move may be a belated one in a crowded marketplace of cloud productivity software suites. There are upstarts such as Slack (which was recently valued at $1.2 billion) and established players, such as Microsoft-owned Yammer. In addition, a number of software-as-a-service players, such as Salesforce and Zoho, integrate productivity suites with their core product.

Despite their differences, modern productivity suites have a common design aesthetic: Their product’s design has more in common with social networks, such as Twitter and Facebook, than traditional productivity software, such as Microsoft Office.

That design choice is intentional as the distinction between personal and professional workspaces becomes increasingly blurry. A number of surveys and studies have shown that Millenials prefer informal workspaces where conversations are driven by social networks. Rapid sales of consumer-friendly devices, such as smartphones and cameras, has further fueled the personalization trend.

The move may also be an attempt by the company to improve its perception in mainstream society. With its stream of personal content and status updates, Facebook has become synonymous with time wastage. This might be the company’s attempt to refurbish its image as a tool for productivity.

Finally, Facebook At Work is also an attempt to increase engagement amongst users and increase user numbers. The Whatsapp acquisition, which enabled the company to enter the messaging space, has already helped garner additional users, who had migrated away from the social network, back into its fold. Even if they do not sign up for Facebook’s personal version, the new users will increase count and, consequently, enhance the social network’s attractiveness to advertisers.

The key question, however, is: Will you Facebook at work?