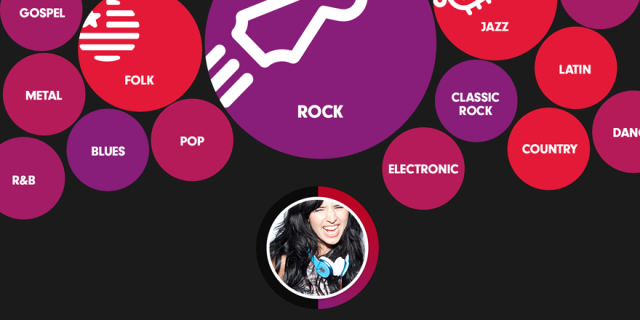 Beats Music just announced an update that will make its curated music recommendations even more personalized and customizable. In a post on the Beats Music blog, the first since the blog’s announcement of Beats’ acquisition by Apple, Beats announced a new update to its iOS app with three new features in Version 2.2.0. “We’ve focused our efforts on the two things that inspired Beats Music in the first place … personalization and curation,” the post notes. Here are the three features that Beats has updated to further reflect that focus on personalization and curation, and make it easier for users to find music that fits their preferences, mood, and occasion.

The Tune Your Taste feature enables users to edit and add to the artist and music preferences that they specified when they first set up their Beats Music account. The initial sign-up process asks users to indicate which genres and which artists they like, love, and hate, and the Tune Your Taste feature enables them to “fine-tune” the preferences they originally noted in that initial setup phase.

“You may have been so anxious to get started you forgot to mention you also love The Beach Boys, Fall Out Boy, and Backstreet Boys — not just Soulja Boy,” the blog post explains. “Now you can fine-tune those preferences, allowing us to scratch your musical itch more specifically.” The Tune Your Taste feature enables users to get better recommendations from the app’s Just for You section, where they find playlists and albums recommended based on their preferences.

The new Sentence History feature lets users view the playlists they’ve created in the past with The Sentence feature. Sentence History will show all of the songs played recently with The Sentence, a recommendation feature that builds custom playlists based on the options a user chooses from a fill-in-the-blanks, Mad Libs-style menu. (They pick options — or let the app randomly generate them, often with humorous results — among activities, emotions, companions, and genres.) With Sentence History, users can “heart” the songs they like most, add them to playlists, add them to the library, or just replay them. “Many of you have told us how much new music you’re discovering while using The Sentence,” the blog post notes, “so we want to make sure those newly found favorite songs aren’t lost in the shuffle.”

Just for You is the section of the Beats app that offers curated playlists based on the genre and artist preferences that the user inputs. The update to the iOS app increases the number of playlists available to a user in the Just for You section, and also diversifies the range of artists in the “album recommendation pool.”

Other additions brought by the update, as noted in the version’s description in the App Store, include verified badges, which certify that a user’s profile has been determined “legit” by Beats, and fixes that, according to Beats, will make playback smoother and more reliable. Here is the release’s description of the update:

You asked for it, and we listened! In this latest release we’ve added:

Tune Your Taste — Want to switch up your Just For You recommendations? Change your favorite genres and artists with the Tune Your Taste feature in Settings
Sentence History — View your most recently played songs from The Sentence
Verified Badges — That red check mark means the profile is certified as legit by Beats
Player Improvements — We fixed a ton of bugs to make playback more smooth and reliable

…and much, much more” 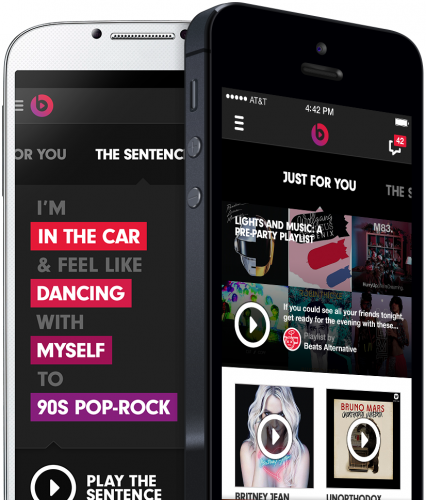 Music apps as a whole are in the midst of a curation craze, with services from Pandora to Spotify offering their own take on the idea. Beats touts its recommendations and playlists as “handpicked by our experts, just for you,” and on its blog notes that its service relies on humans, instead of just algorithms, to make suggestions. It notes that its playlists are “curated by people who believe that music is emotion and life,” and the appeal of the Beats Music service hinges on the idea that handcrafted playlists will benefit from the human ability to pick up on the stylistic nuances and subtle connections that an algorithm can miss as it cross-references genres, artists, and keywords.

While Apple’s acquisition of Beats Electronics, which included the Beats Music service, could serve to bring smarter recommendations to users who purchase apps and media on iOS devices, it’s interesting to note that both Apple and Google, with its acquisition of Songza, have acquired music services that rely on human curators to do what Pandora and Spotify have (more or less) successfully done with algorithms. A recent Entertainment Weekly piece by Miles Raymer noted that what’s odd about the new enthusiasm around curation is that it’s essentially antithetical to the original premise of distributing music via the Internet:

“The irony in this craze for curation is that for the longest time, and until quite recently, it was a widely held tenet amongst techies that the removal of cultural gatekeepers was one of the great benefits that the Internet had given music fans. With the help of algorithms, so the story went, you don’t need to depend on music critics or record clerks to discover new music. And so far, the popularity of services like Pandora and the presence of algorithm-powered ‘radio’ streams in all the major music platforms has backed up that sentiment.”

Raymer goes on to note that there are definite drawbacks to having your music curated by a computer, which has limited tools to draw connections between different artists’ styles on truly interesting grounds. But more than that, he notes that users may actually just prefer knowing that their playlists were put together by another human being.

“Eliminating cultural gatekeepers has been a great advance in that it has removed a lot of the fear and judgment that came with exploring music when you had to buy it from snobby record clerks. But it’s hard to make a personal connection with an algorithm. In an era defined by an obsession with artisanal everything, it’s not surprising that listeners would gravitate toward services that offer handcrafted playlists and a deeper sense of authenticity.”

While it’s not the same as making a mixtape for a friend, the Beats Music service aims to provide the next best thing, the tech-aided equivalent of hand-selecting a mix of songs to accompany a road trip, a breakup, a party, or a quiet afternoon. The new update to the Beats iOS app aims to improve the matches between users and recommendations that have been thought through by a human.

“We understand how personal the music you love is and providing the absolute best premium music experience is a responsibility we don’t take lightly,” Beats’ blog post notes. It will be interesting to see if Apple pushes the curation craze farther, with Beats and possibly with other applications of Beats technology in recommendations for the App Store and iTunes.