‘World of Warcraft’ Is One Step Closer to Free-to-Play

These days, most multiplayer online role-playing games (MMOs) are free to play. The one major hold-out is Blizzard’s World of Warcraft, the most popular MMO in the world, according to the Guinness Book of World Records. For years, Blizzard has maintained that it has no plans to turn World of Warcraft into a free-to-play game.

One upcoming addition to the game suggests the company is at least testing the waters of a free-to-play pricing model. The item in question is called a “WoW Token.” According to Blizzard’s announcement, a WoW Token is “a new in-game item that allows players to simply and securely exchange gold and game time between each other.”

How WoW Tokens work is somewhat complicated, but here it goes. Players can buy WoW Tokens from the game’s shop using real-life money. They can then sell their tokens through an in-game auction house in exchange for gold, the game’s currency. The seller can spend that gold on whatever he or she wants to buy in the game. The WoW Token buyer can then exchange the token for extra game time.

In effect, the tokens give players the ability to buy in-game gold with real-life money, and to extend their World of Warcraft subscriptions using in-game gold — neither of which were possible to do from within the game before.

The plan has yet to be put in place, so it’s unclear how feasible it will be for players to maintain a subscription purely by spending gold they accrue while playing. According to Blizzard, how much gold you’ll get for selling a WoW Token will fluctuate based on supply and demand. Each WoW Token will be worth 30 days of game time. 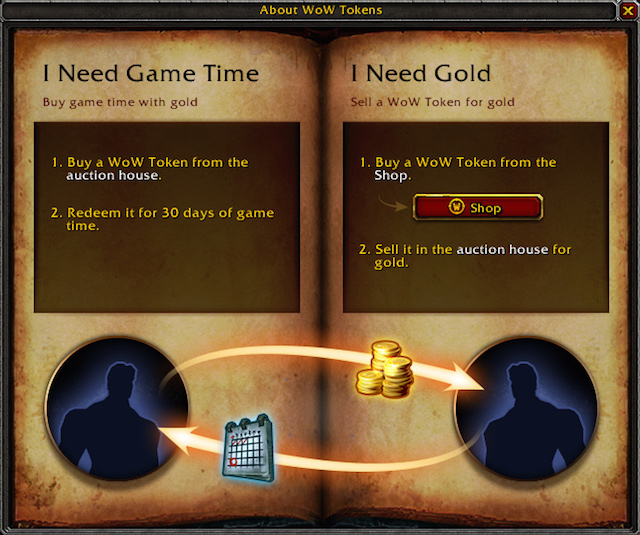 While WoW Tokens certainly appear to be a step in the free-to-play direction, Blizzard doesn’t see it that way.

The company says it introduced the tokens largely as a security measure. Previously, players who wanted to exchange real-life money for in-game gold had to resort to third-party options that took place outside of the game, where Blizzard couldn’t oversee (or, presumably, profit from) the transaction. The company says these third-party gold selling services are one of the main sources of “account compromises” they see.

Reportedly, much of the gold sold through those third-party transactions comes from stolen accounts and “gold farmers.” Gold farmers, often located in developing countries, play the game for hours on end to earn gold that’s sold in these third-party transactions. The Guardian even found a Chinese labor camp in which prisoners were forced to play the game for that purpose.

It’s easy to see why Blizzard is reluctant to tamper with the game’s current pricing model. The company announced in November 2014 that it has about 10 million subscribers, most of which pay between $13 and $15 per month to play the game, depending on their subscription plan. If it’s not broken, why fix it?

Still, it can’t be denied that WoW Tokens will offer players the ability to play the game without spending real-life money, if that’s their goal. If that’s not a step toward a free-to-play model, then nothing is.