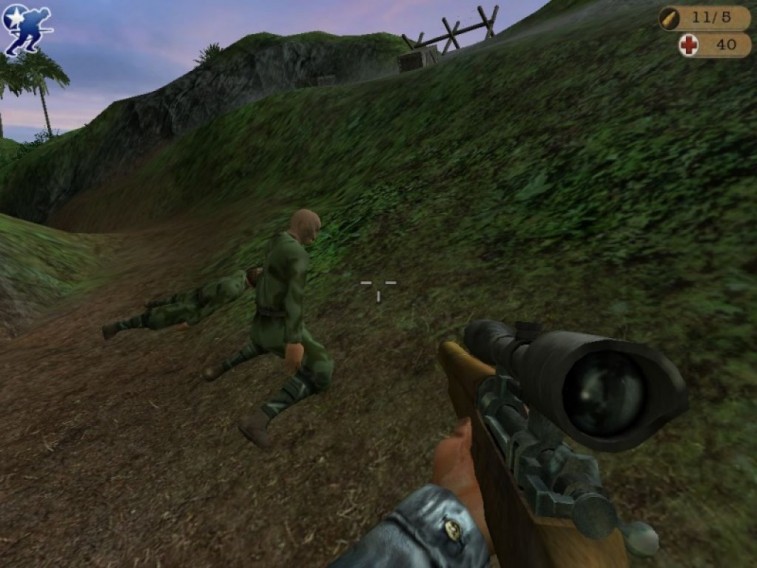 These shooters are so bad, every gamer from every camp can come together in harmony to hate them for being truly awful. We’ve taken the bottom of the barrel. These games have the lowest combined critic and user ratings on Metacritic (In the event of a tie, we give the game with the higher user score the higher spot). In other words, these are the shooters that are overwhelmingly viewed with disgust. So, without further ado, here are the worst shooters you can ever, and should never, encounter.

On top of being just plain ugly, this game cranked up the suffering factor for gamers by making it a total pain to get through the campaign. According to Cheat Code Central, the game has players constantly going head-first into unknown territory with no tactical information. To make matters worse, 1UP notes that there’s only one checkpoint in each mission and a severe lack of health pickups (read none anywhere). Apparently the best way to gain tactical information is to dive into the low-res action, get killed, and start all over again — sounds a lot like the plot to a certain Tom Cruise movie. An Xbox version was also made, and didn’t score too well either. If you really feel like playing a game that takes place in WWII, there are plenty out there. This just happens not to be one of them.

Duck Hunt did the job so long ago that there should be no need for a game like this. Nonetheless, developer FrontLine Studios went ahead and made a cartoonish Duck Hunt-style shooter with several different types of chickens to shoot, and the ability to scroll around the scene to find more chickens. The game itself might be a fine, simple way to blow off steam, but that seems only to apply to the Wii and PC versions, which don’t have to suffer from the small dual-screen setup of the Nintendo DS.

We can all face the fact that we haven’t seen an amazing James Bond game since GoldenEye hit the N64 in 1997. In theory, 007 Legends might sound like a cool game, pulling together a wide variety of the classic James Bond stories right through to Skyfall as a DLC, but betting on a movie-based video game being good is like betting on a two-legged horse at the Indy 500. This game is clunky, has weak AI, and puts Daniel Craig’s voice over all of the former James Bonds — you know, just to give Sean Connery fans a slap in the face. The PC version did the worst, but the Xbox 360 and PS3 versions didn’t do a whole lot better. The Wii U version didn’t even get enough reviews for a consensus.

This is another game that sounds good in theory, but is far from good in delivery. Gettysburg: Armored Warfare combines real-time strategy with shooter. The best of both worlds. You can plan out major assaults, or get down and dirty on the battlefield. Sadly, it fails to pull this dynamic off successfully. Both the shooter side and the RTS side of the game were found to be lacking. Interestingly enough, this game ranks even worse as an RTS, coming in as the third worst RTS of all time. Thanks to its 2.6 User Rating, Gettysburg: Armored Warfare comes a hair above the next game by our ranking system.

You can see for yourself, this game looks ugly and dull. The story and gameplay are equally dull. Terrawars: New York Invasion’s campaign only lasts several hours, but that might be to its favor, as having to play through this game much longer than that doesn’t sound like something anyone is interested in. At least the game offers players the option of suffering through it together with a friend via online cooperative play. Not that it’ll suddenly be worth playing because of that.

Some might argue that this isn’t a shooter. But it does put you in control of guns and you do use those to shoot at other things. Unfortunately, you probably won’t have a lot of fun doing it, even if it is in planes from the Vietnam War. The game feels too cheap and doesn’t have the graphical wow-factor one would expect on PS4. It probably didn’t help any that it was available on previous generation consoles and PC a year earlier and didn’t seem to see very significant upgrades with the port to PS4.

Remember what I said about betting on a movie-based video game being good? Well that was in regards to basing a video game on a good movie. R.I.P.D. the movie was awful. Just horrible. What hope is there for a video game based on a bad movie? Very, very little, as demonstrated by R.I.P.D. The Game. If you find you enjoy the gameplay, you’re in luck, because it’s very repetitive. At least you can suffer through it with a friend. To the games favor, it did at least earn a higher Metacritic score than the movie. Not so favorable is the 1.6 User Score it received, which is the lowest of all the games on this list.

What’s more fun than shooting a varmint only slightly larger than the bullets you’re firing at it? Answer: Almost anything. NRA Varmint Hunter has the lowest critic score of all the games on our list, but was saved from the bottom spot by some gamers who enjoyed it or didn’t hate it quite as much. Critics hate on this game for simply being bad. Users give it credit for being an accurate hunting simulation. I personally give it credit because a lot of fat, furry, little varmints are adorable, and the more time hunters waste playing this game, the less time they spend actually shooting real-life critters.

Maybe the art style of Drake of the 99 Dragons will appeal to you, or maybe the interesting combat style will. If not, then this game is out of luck. It seems like a buggy mess, is lacking in story, and has an out-of-control camera. To make matters worse, the fundamental part of shooters — aiming guns at things — the game does for you. The protagonist is an absurd contortionist and will auto-aim both arms at enemies while the player controls the chaotic camera and fires guns with each trigger. If the third-person camera didn’t whirl out of control whenever it bumped into a wall or object, maybe this game wouldn’t be such a mess. Maybe.

Remember the other two times I already talked about how bad using a movie as the basis for a video game can be? Well, as Rambo: The Video Game demonstrates, it can be truly awful. It can be the foundation for the second worst shooter of all time. The trailer for this game makes it look like maybe it’ll be a cool way to play through the Rambo movies we all know and (maybe) love. It shows off high-intensity gun-play and brutal hand-to-hand combat. Awesome, right? But the game is a dull rail-shooter, and the close-quarters combat we see is from cut-scenes. Some die-hard Rambo fans might still get a kick out of it, but probably no die-hard shooter fans. What’s extra sad is that this is one of the newest game on the list — even with all its fancy (potential) graphics, it falls short. Hell, just look at 1:14 in the trailer above. The developers didn’t even bother to make the helicopter fly above the ground in a scripted sequence. An Xbox 360 version was also made, and also bad.

The latest, worst, and likely last installment in a video game series that dates all the way back to 1992, Alone in the Dark: Illumination successfully let down almost any remaining fans the franchise might have had. Most games in the Alone in the Dark series have had negative reviews, with only the original trilogy and the Dreamcast and PlayStation versions of Alone in the Dark: The New Nightmare scoring above a 70 on Metacritic. Alone in the Dark: Illumination earned some credit from reviews for having interesting ideas, but that didn’t help much, as it was slammed for failure to deliver on those idea, and then further slammed for the highly unpolished state it was released in. The result: it takes the cake for worst shooter of all time, and even worst survival horror game while its at it. The one title it doesn’t get is worst part of the Alone in the Dark franchise. That dishonor goes to Uwe Boll’s 2005 film adaptation of the game.

There are two video games that almost definitely would have ranked low enough to be on this list if it weren’t for a swarm of gamers who came in and gave each some rather dubious ratings. For both, critics were practically screaming about how lousy they are. Gods and Generals received a Critic Score of 19 on Metacritic. Navy SEALs: Weapons of Mass Destruction received an even lower Critic Score of 18. In a terrible twist, they received overwhelmingly favorable reviews from gamers. The gamers praised all of the facets that critics condemned in equal but opposite fashion. One of the user reviews for Navy SEALs: Weapons of Mass Destruction even mentions Gods and Generals in their review, saying it’s not quite as good as the latter, but still giving it a perfect 10. While the massive swarm of reviews is almost certainly tongue in cheek, it does prevent us from accurately placing these titles within the ranking of this list. Nonetheless, we’re certain they belong among the worst shooters of all time, so here they are. Check them out and decide for yourself.

If you’d rather play a good shooter, check out our list of the 10 best first-person shooters of all time.