Music games are in a very different place in 2015 than they were in 2007, when Guitar Hero and Rock Band sets were flying off the shelves. The bottom fell out of the industry somewhere around 2010, and both series have lain dormant ever since.

Their slumber is ending this year, as new installments in both series are launching by the end of the year. How do these upcoming games differ, and which one will you find more interesting? Keep reading to find out.

What platforms are these games coming to?

Rock Band 4: PlayStation 4 and Xbox One.

Will they feature multiple instruments?

Rock Band 4: Yes, you’ll be able to jam out with buddies playing on guitar, drums, bass, and vocals. However, there’s no keyboard or pro guitar support this time around.

Guitar Hero Live: No, this game is all about the guitar.

Have the instruments changed since previous installments?

Rock Band 4: Not really. Harmonix will release the game alongside new guitar controllers, drums, and microphones, but the instruments will be pretty similar to the hardware used on Rock Band 3.

Guitar Hero Live: Yes, the new guitar is completely redesigned. Instead of having five buttons in a row on the fretboard, it now has six, with two buttons on each fret. You can forget about any muscle memory you acquired by playing previous installments of the franchise, because the new guitar requires a whole new mindset.

Will my old instruments work?

Rock Band 4: Harmonix is still working on this feature, which may or may not make it to the finished game.

Will my old DLC songs work in the new games?

Rock Band 4: Yes, at least the vast majority of them. Harmonix is still in negotiations with some of the record companies to get the licensing in place, but most of the 2,000+ songs released for Rock Band over the years will work in the new game.

Guitar Hero Live: No, the new Guitar Hero will not be backward-compatible with the old songs.

How much will the games cost?

Rock Band 4: Pricing has yet to be announced, but the game will come in at least two different configurations.

Guitar Hero Live: So far we only know about one configuration. It’s a bundle that includes the game and one guitar controller for $100.

Are there any other notable differences between the games?

Rock Band 4: Compared to its predecessors, Rock Band 4 will be a scaled-back game in many ways. The series had started to suffer from “feature creep” by the time Rock Band 3 came out, so with this installment Harmonix is going for a more focused experience.

The game will be based around three types of players. First are the people who seek out high scores. Second are the fans who mainly play music games at parties with their friends to have a good time. Third are people who enjoy the story progression: starting out in a small band that gains followers and eventually becomes famous.

Guitar Hero Live: This game is significantly different from its predecessors. The graphics are live-action and first-person, so it actually looks like you’re onstage, playing in a real band, with an audience of real people cheering (or jeering, depending on your performance) in front of you.

The game will also feature something called Guitar Hero TV, a 24-hour music video network featuring real songs and real music videos. In this mode, the Guitar Hero overlay will be displayed on top of the videos so you can play along with the songs. Guitar Hero TV will have a competitive online section, and will feature channels based on different music genres that you can switch between at any time. 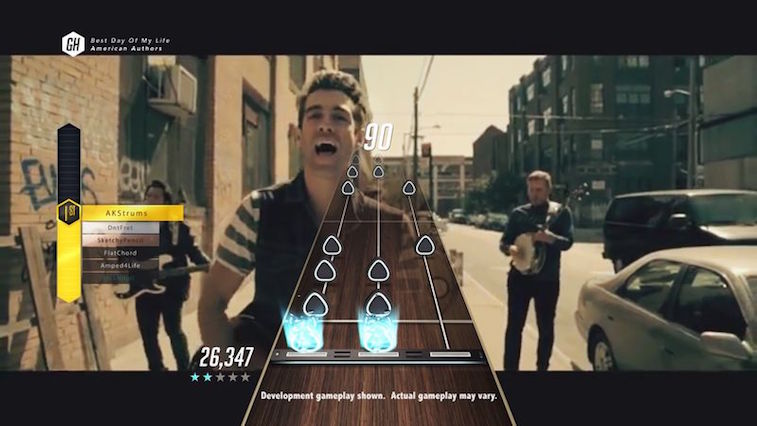 How would you sum these games up?

Rock Band 4: Harmonix is playing it safe with this game by giving fans of the series exactly what they’ve asked for: a more focused version of the game they already love, with backward compatibility.

Guitar Hero Live: Activision might rub its fans the wrong way by scrapping everything that came before. Make no mistake, this is a very different game than 2010’s Guitar Hero: Warriors of Rock. It will be interesting to see how players respond to the changes.

When will we hear more about these games?

We’ll definitely be hearing more about both Rock Band 4 and Guitar Hero Live at this year’s E3 conference in June.

Is this an exciting time to be a fan of music games?