2 Things to Consider Before Buying McDonald’s 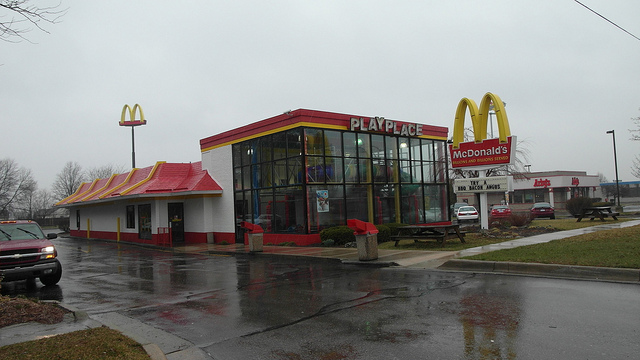 McDonald’s (NYSE:MCD) is probably the most recognizable brand on the globe, at least in the restaurant business. In fact, it happens to be the largest global chain of fast food restaurants. McDonald’s, through its network of franchisees and corporate-owned stores, serves nearly 70 million customers daily in 120 countries. McDonald’s continues to push to remain the best of the best in the fast food space. Major domestic competitors Burger King (NYSE:BKW) and Wendy’s (NYSE:WEN), while making every attempt to steal market share, have yet to be all that successful. The stock currently trades at $94.91 with a 52-week range of $90.86 to $103.70.

The stock has with a p/e of just over 17 and pays a 3.4 percent dividend yield. McDonald’s is one of the greatest companies in history and has been a great stock for the last 25 years. Although the company is taking proper steps to ensure growth (e.g. expanding its menu, watching portion sizes, cutting input costs and pricing strategy), I believe McDonald’s is fairly valued right now, as there are two headwinds the company continues to face: the potential rising costs of labor and issues with beef costs.

There is a growing push in the United States and in other industrialized countries to raise minimum wage standards. The cold hard fact of the matter is that paying employees more hurts the bottom line and in turn hurts shareholders. While it certainly boosts the life quality of employees, in turn, the costs are likely to be passed on to the consumer. At what point rising menu costs would reduce business is unclear, but I’m not about to pay more than $5 for a Happy Meal. Might as well call it the “I’m fine meal.” Rising labor costs hurt the shareholders and the consumers, unfortunately.

And with a rise in wages across all of McDonald’s’s restaurants, a worst-case scenario could be detrimental. McDonald’s’s restaurants are in nearly 120 countries and territories around the world, and it along with its franchisees operate about 35,000 restaurants worldwide. They employ nearly 2 million people. As an example, let’s assume, on average, workers are there for 30 hours per week (a rough estimate lumping in part time, students, full time, managers etc).

If everyone worked for another $3 per hour, it would cost McDonald’s a another $90 per week per employee. Multiply by 2 million and the company is out $180 million per week, or nearly $9.4 billion annually. No question such a rise in wages paid could seriously pressure margins. Obviously this wouldn’t happen all at once like this and is an extreme example, it but gives you an idea of the issues faced. Smaller rises can be absorbed, but higher wages are a real risk to buying this company’s stock into 2014.

The rising minimum wage is front and center on the New York Times and the cause is supported by many. Some U.S. states have raised minimum wage from January 2014 onwards. However, there is a chance federal minimum wage could be increased 40 percent from $7.25 per hour up to $10.10 by 2015. The threat of rising labor costs is real.

Beef is one of McDonald’s biggest headwinds. As a company that is also environmentally conscious, when the company discovered that more than a quarter of its carbon footprint comes from its beef purchase practices, it began a beef sustainability initiative. This plan will have McDonald’s using environmentally sustainable beef by 2016. I don’t know about you, but I have no idea what “sustainable beef” really is, and there is no accepted definition. What I do know is that beef prices have been rising heavily over the last decade. In fact, beef prices were at their highest in a decade in 2013.

On top of that, beef prices are projected to rise another 4 percent in 2014. It is definitely going to pressure margins. Even though McDonald’s has near limitless negotiating power, the fact is prices are up significantly. Now the company wants to do this sustainability plan. Executives are looking to purchase beef that is raised and transported in an environmentally friendly way. What this tells me is that McDonald’s will reduce its carbon footprint, but there is no way I see this approach being a benefit to margins.

Those who choose to purchase McDonald’s, a very strong stock over the years, must realize that the company, along with its competitors, will face rising beef costs and the potential for significant increases in labor costs. While McDonald’s continues to be a pioneer in shaping its menu offerings to reach consumers’ wallets, it is unclear whether the company’s organic growth will be enough to offset the margin pressure of beef costs and labor. The beef sustainability plan, while certainly a positive environmentally, is something that could further increase McDonald’s beef costs. At current levels, McDonald’s is fairly valued considering its earnings growth potential. It’s still a good holding at a 3.4 percent dividend yield.

Disclosure: Christopher F. Davis does not currently own shares of any stocks mentioned in the article and has no plans to initiate a position in any stocks discussed in the next 72 hours.