The path to retirement is normally considered to be a life-long marathon filled with numerous hurdles that occasionally trip up participants. The greatest economic slowdown since the Great Depression impacted millions of Americans, but those nearing retirement are feeling better about their finances.

With home prices and the stock market rebounding from the financial meltdown, baby boomers are feeling better about their soon-to-be golden years. Fifty-seven percent of still-working boomers aged 50 to 60 years intend to retire from their current full-time careers by age 65, earlier than the median age of 67 in 2010, according to a new survey from Del Webb – a leading builder of active-adult communities.

Despite two major stock crashes within a decade, the improved sentiment is more in line with Del Webb data from 1996, when 50-year-olds planned to retire at a median age of 63.

Don’t Miss: 10 States That Offer the Most Comfortable Retirement

“Boomers are clearly feeling more positive about their situation and the housing market in general, with more expecting to retire sooner than just three years ago,” explains Deborah Wahl, senior vice president and chief marketing officer for PulteGroup, parent company of Del Webb.

Retirement is no longer viewed as a time to simply play shuffleboard or Bingo all day. Almost 80 percent of boomers expect to work in some capacity, even after they retire. Fifty-one percent plan to work full-time, while 28 percent say they expect to work part-time. However, many are using retirement as a chance to change careers. 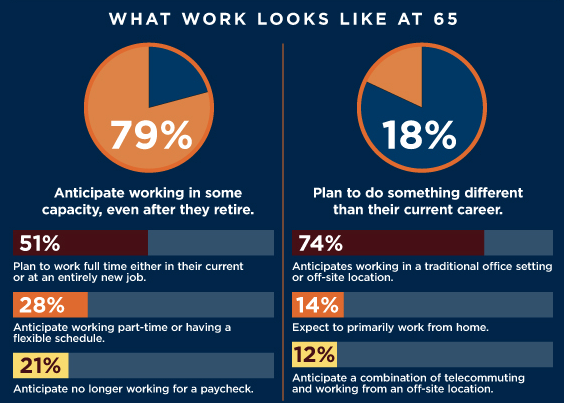 The survey finds that 18 percent of boomers plan to pursue a new profession in their retirement. Fourteen percent say they expect to primarily work from home. The majority still anticipate working in a traditional office or off-site location.

“While boomers are still working, they are not putting off a retirement lifestyle,” Wahl adds. “An increasing number of our Del Webb homeowners continue to work in some fashion, but have changed their focus from their careers to their family and activities that enrich their lives.”

Don’t Miss: Does the Word ‘Retirement’ Even Resonate With You Anymore?

Although 66 percent of boomers say they are not financially prepared to retire, money is not the only reason to keep working in retirement. Fifty-one percent plan to avoid boredom and maintain a sense of purpose by working in their golden years. Meanwhile, 46 percent say they like to work, and 29 percent are keeping a job to maintain insurance benefits. Interestingly, 6 percent anticipate working in order to avoid spending time with a spouse or significant other. 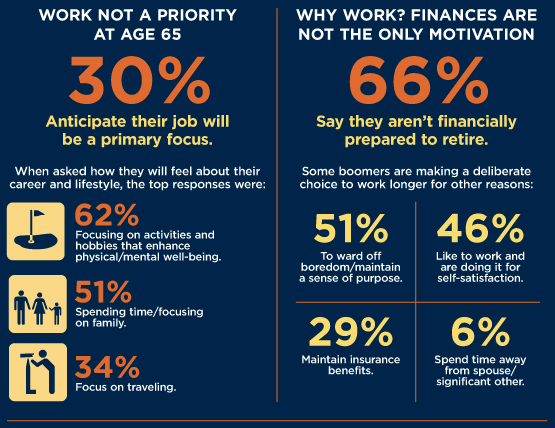 Don’t Miss: Are Bonds a Bad Idea For Your Retirement Nest Egg?