5 Bills That Are Hoping to Ease the Student Loan Burden

The American Institute of CPAs recently reported that nearly 39 million adults in the United States had student loan debt at the end of 2012. The number of loans outstanding has increased 70 percent since 2004, and each loan averages $24,803. As of the first quarter of 2013, the total amount of student debt outstanding was over $950 billion. Most people — particularly those bearing the burden — believe that there is some sort of student debt crisis in America. The cost of college is skyrocketing at a time when a college education is becoming more and more important. As of May 7, the ratio of job seekers to job openings is still 3.1 to 1.

What this creates is an environment in which it is very difficult for a college graduate to get a job. What’s more, most of those who do get jobs are getting lower-paying jobs that often can not support both their normal financial needs and their debt burden.

Fortunately, American policymakers and advocacy groups are hard at work looking for a solution. Some of their ideas are good, some are not — some have passed, some will not — but here’s a look at five of them:

1) The Smarter Solutions for Students Act

On May 23, the U.S. House of Representatives approved the Smarter Solutions for Students Act (H.R. 1911). The bill is designed to prevent interest rates of subsidized Stafford loans from doubling as scheduled on July 1. The bill and its proponents advocate a market-based interest rate for student loans, instead of a system that is devised by policymakers in Washington.

The bill will calculate both subsidized and unsubsidized loans using a formula based on the 10-year Treasury note plus 2.5 percent, with an 8.5 percent cap.

Senator Elizabeth Warren (D-Mass.) introduced legislation that would set the interest rate (for one year) of federally subsidized student loans to the same primary interest rate offered to banks through the Federal Reserve discount window, currently at 0.75 percent.

The measure is part statement and part relief mechanism, but Warren does make an interesting point: Why does the government charge students so much to borrow money, and banks so little? The obvious answer is buried in the risk associated with each loan, but Warren would argue that educational loans are not the place to apply the profit motive. 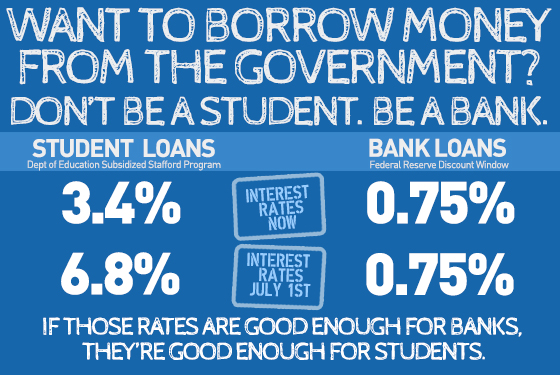 According to the U.S. Senate Committee on Health, Education, Labor & Pensions, the Reed-Harkin Student Loan Affordability Act of 2013 (S. 953) would “freeze need-based student loan interest rates for two years while Congress works on a long-term solution to slow the rapid accumulation of student-loan debt, and is fully paid for by closing three egregious tax loopholes.”

Those tax loopholes are: the use of tax-deferred retirement accounts as a complicated estate planning tool, the use of expatriated entities to strip corporate earnings, and an oil and gas industry tax provision that treats oil from tar sands the same as other petroleum products.

“This is an issue of fairness. Instead of raising interest rates on families struggling to pay for college, Congress should close costly, special interest tax loopholes. This legislation will protect taxpayers and keep student loan interest rates affordable while ending wasteful subsidies for oil companies and reducing the amount of taxes lost to tax havens,” said Senator Jack Reed (D-R.I.)

This act, also supported by Senator Reed, as well as Senator Dick Durbin (D-Ill.) and U.S. Representatives John Tierney (D-Mass.) and Joe Courtney (D-Conn.) would offer adjustable rate loans for college students with a cap on the maximum interest rate that could be charged to protect borrowers during periods of high interest rates.

Senator Reed’s website states that “rates would be set every year based on the 91-day Treasury bill, plus a percentage determined by the U.S. Secretary of Education to cover program administration and borrower benefits. Under the plan, interest rates for need-based, subsidized federal loans would be capped at a maximum of 6.8 percent. Rates for unsubsidized and parent loans will be capped at a maximum of 8.25 percent.

“Under current law,” states President Barack Obama’s 2014 budget, “interest rates on subsidized Stafford loans are slated to rise this summer from 3.4 percent to 6.8 percent. At a time when the economy is still recovering and market interest rates remain low, the Budget proposes a cost-neutral reform to set interest rates so they more closely follow market rates, and to provide students with more affordable repayment options.”

“The rate on new loans would be set each year based on a market interest rate, which would remain fixed for the life of the loan so that student borrowers would have certainty about the rates they would pay. The Budget also expands repayment options to ensure that student borrowers do not have to pay more than 10 percent of their discretionary income on loan payments.”