5 Reasons You Should Be Very Scared of a U.S. Default

On October 1, Treasury Secretary Jacob Lew sent a letter to Congress reiterating an increasingly urgent message: if Congress does not act to raise or suspend the statutory debt limit, the U.S. government could default on its financial obligations.

The U.S. hit its current debt ceiling of approximately $16.7 trillion in May of this year, and in order to continue paying the nation’s bills the Treasury began taking extraordinary stopgap measures. These measures are expected to run dry on October 17, at which time the Treasury will have about $30 billion on hand — enough to finance operations for a few days at best. From October 17 to November 7 alone, the U.S. government $417 billion in bonds will come due.

Even with the partial shutdown of the U.S. government stumbling into its sixth day, it’s the possibility of a default that is dominating the fiscal conversation. The U.S. has never suffered a true default on its financial obligations, and nobody knows for sure what the fallout would be — but the consensus, however nebulous, is that it would be catastrophic. Here are some of the ways in which a default could impact the economy.

Brinksmanship — the art of eleventh-hour deal making — is a game in which the party that pushes Uncle Sam closest to the edge of a cliff without actually sending him toppling over wins, and it is absolutely self destructive. Even though economists, business leaders, and market participants are operating under the assumption that the U.S. won’t, in fact, default on its financial obligations, the likelihood of such an event appears to be increasing every day as the government is pushed closer and closer to the cliff.

As participants in the U.S. economy, it’s only natural that the closer the government gets to the edge the more nervous we become. This nervousness is antithetical to confidence, and has a negative impact on the behavior of both businesses and consumers. 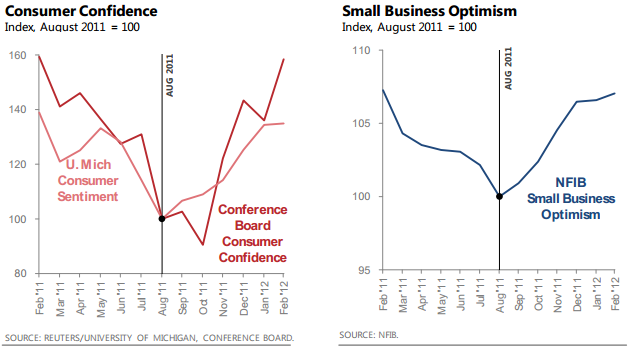 Overall confidence in the economy, as measured by Gallup’s U.S. Economic Confidence Index, has declined dramatically over the past few days. The index averaged -35 for the October 4-6 period, down from -20 in the September 27-29 period. Gallup cited the “uncertainty surrounding the nation’s fiscal battles and possible government shutdown” as a contributing factor.

Decreased confidence means decreased spending, which is the fuel that powers the U.S. economic engine. Self-reported consumer spending, also measured by Gallup, fell by $11 in September to an average of $84 per day, one of the largest month-to-month declines recorded. An actual default is likely to dramatically reduce economic confidence, overall consumer spending (which accounts for as much as two-thirds of economic activity), as well as business spending and investment.

The U.S. dollar is the global reserve currency of choice. Governments and central banks around the planet — including the U.S. Federal Reserve — hold U.S. Treasury securities as equities.

In a note seen by the International Business Times, banking analyst Richard Bove of Rafferty Capital Markets warned last week that, in the event of a default, “The devastation to the United States would be so severe that it would take decades to recover from the Depression caused by a default and the attendant dumping of trillions of dollars of U.S. Treasury securities on the global financial markets.”

U.S. Treasuries account for as much as 54.5 percent of the Fed’s balance sheet, or about 11.6 percent of total public debt. The Social Security fund holds nearly 30 percent. So not only would defaulting on this debt would destroy the equity that is holding the U.S. fiscal house in order, but it would also damage the fiscal houses of governments and banks around the world.

Bove continued that, “What is not theoretical is that the discussion of the possibility that the U.S. would actually default has a real impact on every country in the world that holds Treasurys. It tells them as clear as can be that they are at risk. The reserves in their central banks are not based on a nation with a stable and secure economy. The value of their reserves is based on an erratic and politically charged government that may destabilize their central banks and they cannot stop it.” 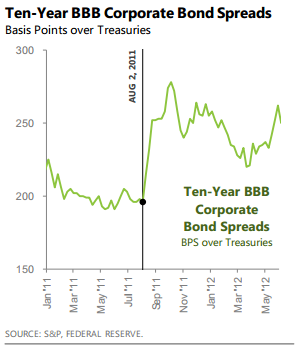 In a report on “the macroeconomic effect of debt ceiling brinksmanship,” the Treasury explained that “Investors’ willingness to lend to nonfinancial corporations is often summarized by credit risk spreads — that is, how much higher yields on private securities are than yields on comparable maturity Treasury securities. If investors are less willing to invest, they demand a higher return for that investment. From the borrowers’ perspectives, wider credit spreads imply a higher cost of funding for a given level of Treasury rates. Higher funding costs lead to less spending on investment or other outlays that are financed.”

During the 2011 brinksmanship, risk spreads on BBB-rated corporate debt increased 56 basis points. Part of this can be explained by uncertainty in Europe at the time, but many economists fear repeat. If borrowing costs rise, investment will slow, harming an already underwhelming economic recovery. 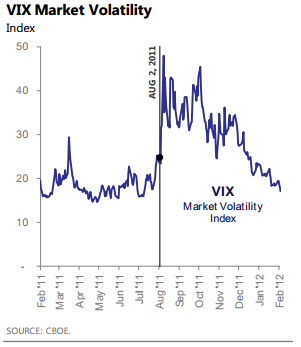 Markets abhor uncertainty. A clear understanding of the economic landscape and the ability to foresee with some clarity future financial conditions is a critical component of any investment decision, and brinksmanship creates fog of war for investors.

The VIX index is a measure of implied volatility in the S&P 500, and during the 2011 debt-ceiling stand off, the index increased dramatically. Increased volatility can cause investors to exit the market and — like general economic uncertainty — cause households and businesses to reduce spending.

The VIX has been on the rise over the past few weeks, although equities have been relatively stable given the political rhetoric as traders appear to have been buying the dips. During the last debt-ceiling standoff, the S&P 500 fell about 17 percent.

Speaking with Bloomberg Television last week, PIMCO co-CIO Bill Gross said that a default would be catastrophic for bonds. ”Markets are interrelated,” he said. “We have complex markets in terms of money market funds and repo and interconnected types of relationships that depends upon the solvency of the U.S. Treasury. The U.S. Treasury is basically the center of the global financial conflict. The default is unimaginable.

“If it happens, it will set into motion a complex series of events that affects not just bonds but credit transit transactions on a worldwide basis equity prices commodity prices.” Gross, like most other market participants, also said that policymakers are likely to avoid default.