All Clear for CBS to Surge Higher?

With shares of CBS Corp. (NYSE:CBS) trading around $53, is CBS an OUTPERFORM, WAIT AND SEE, or STAY AWAY? Let’s analyze the stock with the relevant sections of our CHEAT SHEET investing framework.

CBS stock has been surging higher in recent years. The stock is now consolidating near all-time highs and looks poised to continue. Analyzing the price trend and its strength can be done using key simple moving averages. What are the key moving averages? The 50-day (pink), 100-day (blue), and 200-day (yellow) simple moving averages. As seen in the daily price chart below, CBS is trading above its rising key averages, which signals neutral to bullish price action in the near term. 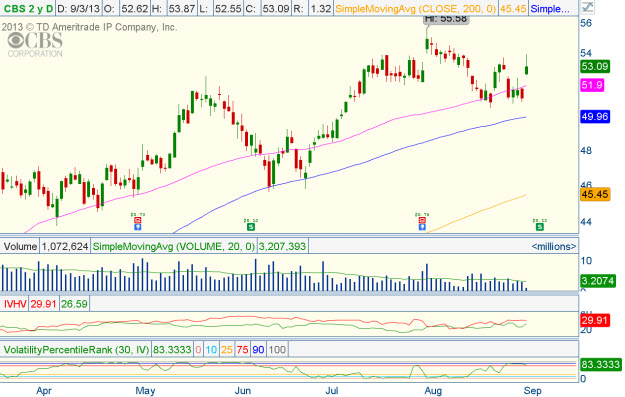 CBS has seen rising earnings and revenue figures over the last four quarters. From these numbers, the markets have been upbeat about CBS’s recent earnings announcements.

How has CBS stock done relative to its peers – Comcast (NASDAQ:CMCSA), 21st Century Fox (NASDAQ:FOXA), and Disney (NYSE:DIS) — and sector?

CBS has been a relative performance leader, year to date.

CBS is one of the largest nationwide providers of entertainment and mass media services. The company’s dispute with Time Warner Cable is now settled, to the benefit of CBS. The stock has been surging higher in recent years and looks poised to continue. Over the last four quarters, earnings and revenues have been rising, which has led to upbeat investors in the company. Relative to its peers and sector, CBS has been a year-to-date performance leader. Look for CBS to continue to OUTPERFORM.