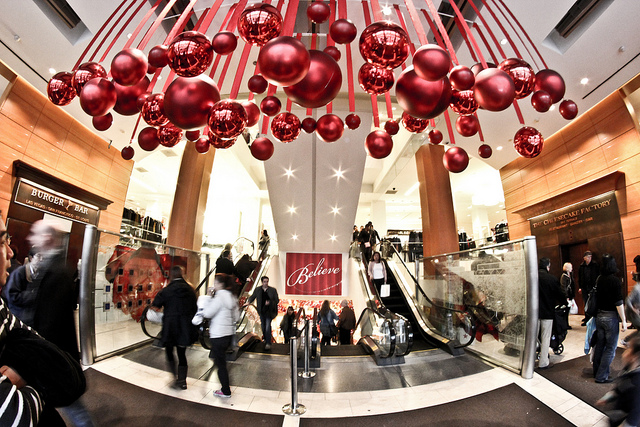 The new challenge facing brick-and-mortar shops this holiday season seems to be the increasing presence of e-commerce in consumer’s daily lives. Retailers like Macy’s (NYSE:M), Target (NYSE:TGT), Wal-Mart (NYSE:WMT), and Best Buy (NYSE:BBY) made plans early this season to stave off competitors such as Amazon.com (NASDAQ:AMZN) and other e-retailers, which, unlike brick-and-mortar stores, have one distinct advantage: their doors never close.

Last year, online sales accounted for a full 40 percent of the $59 billion in sales amassed over the Black Friday weekend in 2012, and those numbers, paired with lethargic store traffic in the brick-and-mortar sphere mean that the pressure is on to lure customers into the shops. The pressures aren’t set to go away, either, with a recent Nielson survey estimating that just over 50 percent of shoppers are planning on buying something over the internet this year, a statistic up more than 10 percent from last year, compared to just 48 percent of consumers who said they were planning on visiting a “big box” store during this year’s biggest holiday shopping weekend.

As a result, Macy’s opened on Thanksgiving this year for the first time ever, and other chain retailers have begun offering Black Friday deals earlier in the day Thursday, or utilizing tactics to get customers through the door, such as keeping deals hidden until consumers set foot in store, and only unveiled at a specific time, a strategy employed by Best Buy this year. This strategy aims to prevent other retailers from matching or beating their prices, in addition to luring customers in store. Other retailers put more of their deals on the web, so as to better compete with online retail giants.

However, despite their best efforts to keep up with e-commerce Goliath Amazon.com, online sales of brick-and-mortar companies Target and Wal-Mart still only account for about 2 percent of overall sales. Both Target and Wal-Mart are planning on investing more heavily in technology over building new locations, and this year, Target made nearly all of its Black Friday discounts available online as well as in-person, a change from previous years.

On the flipside, Amazon.com has developed its own strategies for beating out its old-school competition. In the past, the company offered discounts in the days leading up to Black Friday, and this year it added new deals every 10 minutes in order to more effectively keep customers attention. With the Black Friday weekend wrapping up, Disney (NYSE:DIS) Retail’s vice president, Paul Gainer, is reporting in-line brick-and-mortar sales, but higher-than-expected online sales, a trend that seems reflected in the aforementioned investments in online technology on the part of stores like Target.

The bottom line seems to be that online retail is flourishing, and brick-and-mortar companies will need to effectively address the growing trend towards online sales if they hope to profit in the wake of e-commerce gurus like Amazon and eBay (NASDAQ:EBAY).