With shares of Apple (NASDAQ:AAPL) trading around $606, is AAPL an OUTPERFORM, WAIT AND SEE, or STAY AWAY? Let’s analyze the stock with the relevant sections of our CHEAT SHEET investing framework:

Apple and Samsung (SSNLF.PK) have restarted discussions over a possible settlement to its multiple patent-infringement lawsuits against one another, according to “people directly involved with the matter” cited by The Korea Times. “Samsung has recently resumed working level discussions with Apple and the key issue is how to dismiss all lawsuits,” said the unnamed source. “Some more time will be needed to fix terms of details such as royalty payments in return for using patents owned by each before reaching a full agreement.” The Korea Times’ source also noted that the mixed verdict in the recently concluded Apple v. Samsung trial in California may have spurred the latest attempt to reach an out-of-court settlement. In that trial, a jury awarded Apple nearly $120 million in damages over Samsung’s infringement of several smartphone technology patents held by the iPhone maker.

However, Samsung was also awarded damages in the amount of $158,400 for Apple’s infringement of one its patents. Patent law expert Florian Mueller of FOSS Patents noted that the last trial was the first time that Apple was found to be infringing on a non-standard-essential patent that Samsung holds. Standard-essential patents, or SEPs, cover essential technologies that companies are required to license under FRAND (fair, reasonable, and non-discriminatory) terms. Samsung has been widely criticized in European and American courts for using its SEPs to try to win sales bans against its rivals. Last week, Japan’s Tokyo District Court also criticized Samsung’s abuse of the patent system by noting that the Korea-based company had failed to negotiate “in good faith” with Apple for a SEP licensing fee, reports Nikkei.

Apple stock has struggled to make significant progress over the last couple of years. However, the stock is currently trading near highs for the year and looks poised to continue. Analyzing the price trend and its strength can be done using key simple moving averages. What are the key moving averages? The 50-day (pink), 100-day (blue), and 200-day (yellow) simple moving averages. As seen in the daily price chart below, Apple is trading above its rising key averages which signal neutral to bullish price action in the near-term. 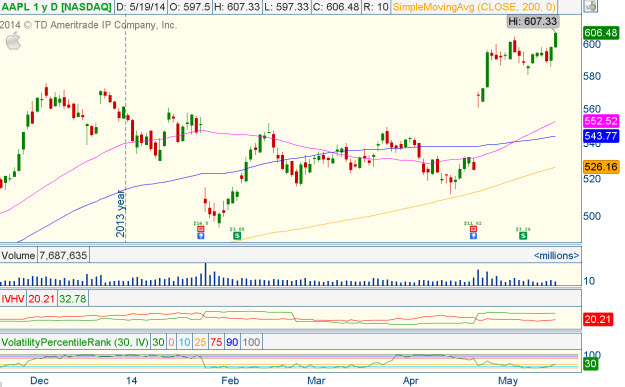 Apple has seen increasing earnings and revenue figures over the last four quarters. From these numbers, the markets have been pleased with Apple’s recent earnings announcements.

Apple has been a relative performance leader, year-to-date.

Apple strives to provide innovative products and services that consumers and companies love to own. The company and Samsung have restarted discussions over a possible settlement to its multiple patent-infringement lawsuits against one another. The stock hasn’t made significant progress over the last couple of years, but is currently trading near highs for the year. Over the last four quarters, earnings and revenues have been on the rise, which has left investors pleased about recent earnings announcements. Relative to its peers and sector, Apple has been a year-to-date performance leader. Look for Apple to OUTPERFORM.