With shares of Comcast (NASDAQ:CMCSA) trading around $51, is CMCSA an OUTPERFORM, WAIT AND SEE, or STAY AWAY? Let’s analyze the stock with the relevant sections of our CHEAT SHEET investing framework:

Comcast and Time Warner Cable (NYSE:TWC) have announced that should their mega-merger be approved by regulators, Comcast will divest approximately 3.9 million subscribers to Charter Communications (NASDAQ:CHTR), which will make Charter leapfrog Cox Communications to become the nation’s second-largest cable operator, behind the beefed up Comcast. The companies announced the deal on Monday morning. Comcast and Charter will complete the deal in three separate transactions. The first transaction will involve Comcast selling Charter 1.4 million Time Warner Cable customers for cash, though how much it would cost Charter was not revealed. The second transaction will involve Charter and Comcast swapping 1.6 million customers, which will result in “improving the geographic presence of both companies, leading to greater operational efficiencies, improved technology deployment and enhanced customer service,” according to a joint press release from two cable operators.

The third transaction involves Comcast creating a new publicly owned cable company called SpinCo that will consist of 2.5 million current Comcast subscribers. Comcast and Time Warner shareholders — which will be just Comcast shareholders should the merger go through — will own 67 percent of SpinCo, while shareholders of the new Charter will own 33 percent of the company. Comcast will have no ownership interest in SpinCo, which will be managed entirely by Charter. These three deals will result in the merged Comcast-Time Warner entity only owning about 30 percent of the total U.S. cable market, according to the companies’ press release. Comcast said that even with these transactions with Charter, the merger with Time Warner will still result in $1.5 billion in operating efficiencies, and Comcast shareholders will receive value through shares in SpinCo.

In an investor presentation on the deals, provided by Reuters, the companies estimated that SpinCo’s enterprise value would be around $14.3 billion. “Today’s Agreement follows through on our willingness to divest subscribers, while also marking an important step in our merger with Time Warner Cable,” Comcast CEO Brian Roberts said in a press release. “These transactions enable us to deliver meaningful value to our shareholders. The realignment of key cable markets achieved in these transactions will enable Comcast to fill in our footprint and deliver operational efficiencies and technology improvements.”

Comcast stock has struggled to make significant progress over the last couple of months. However, the stock is currently trading near all time highs and looks set to continue. Analyzing the price trend and its strength can be done using key simple moving averages. What are the key moving averages? The 50-day (pink), 100-day (blue), and 200-day (yellow) simple moving averages. As seen in the daily price chart below, Comcast is trading between its rising key averages which signal neutral price action in the near-term. 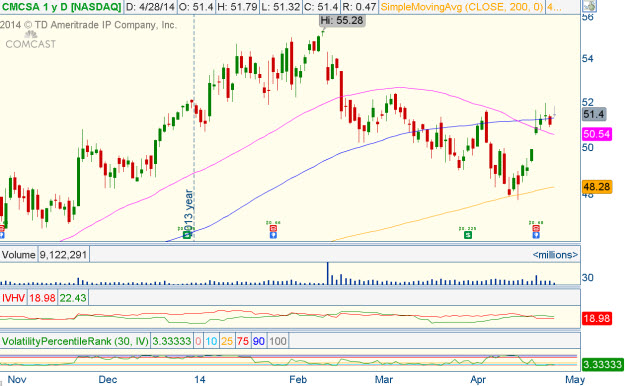 Comcast has seen rising earnings and revenue figures over the last four quarters. From these numbers, the markets have been pleased with Comcast’s recent earnings announcements.

Comcast has been an average performer, year-to-date.

Comcast provides communications and entertainment products and services to consumers and companies. The company and Time Warner Cable have announced that should their mega-merger be approved by regulators, Comcast will divest approximately 3.9 million subscribers to Charter Communications. The stock has struggled to make significant progress over the last couple of quarters, but is currently trading near all time highs. Over the last four quarters, earnings and revenues have been on the rise, which has left investors pleased. Relative to its peers and sector, Comcast has been an average year-to-date performer. WAIT AND SEE what Comcast does this quarter.