With shares of Facebook (NASDAQ:FB) trading around $75, is FB an OUTPERFORM, WAIT AND SEE, or STAY AWAY? Let’s analyze the stock with the relevant sections of our CHEAT SHEET investing framework:

Facebook is engaged in building social products in order to create utility for users, developers, and advertisers. People use Facebook to stay connected with their friends and family, to discover what is going on in the world around them, and to share and express what matters to them with the people they care about. Developers can use the platform to build applications and websites that integrate with Facebook to reach its global network of users, building personalized and social products. Advertisers can engage with more than 900 million monthly active users or subsets of users on Facebook based on information they have chosen to share.

Facebook shares jumped more than 5 percent on Wednesday in extended-hours trading after the social media giant reported fiscal 2014 second-quarter earnings of 42 cents per share, excluding items, on revenue of $2.91 billion, compared with a profit of 19 cents a share on revenue of $1.8 billion in the year-ago period. Wall Street had expected the company to issue second-quarter EPS of 32 cents on revenue of $2.8 billion, according to analysts polled by Reuters. “We had a good second quarter,” Mark Zuckerberg, founder and chief executive officer at Facebook, said in the company’s second-quarter earnings statement. “Our community has continued to grow, and we see a lot of opportunity ahead as we connect the rest of the world.”

Net income for the quarter ended June 30 jumped 138 percent to $791 million, compared to $333 million during the same period in 2013. Revenue for the second-quarter of 2014 totaled $2.91 billion, an increase of 61 percent, compared with $1.81 billion a year earlier. Facebook beat Wall Street earnings and revenue estimates thanks to its strong mobile advertising business that soared “over 151 percent year-over-year” and now makes up 62 percent of the company’s advertising revenue.“It’s all about digital ads,” Keith Bliss, senior vice president and director of sales and marketing at Cuttone & Co., Inc. told IBTimes. “The big thing with Facebook is all about how are they acquiring new users onto the platform and how are they retaining new users.” Facebook said daily active users on average for June 2014 were 829 million, an increase of 19 percent year-over-year.

Meanwhile, mobile daily active users came in at 654 million on average last month, an increase of 39 percent compared to a year earlier. As of June 30, 2014, the firm said monthly active users were 1.32 billion, up 14 percent year-over-year, and mobile active users rose 31 percent to 1.07 billion from the same period in 2013. Meanwhile, revenue from advertising was $2.68 billion, a 67 percent increase from the same quarter last year. Mobile advertising revenue represented approximately $1.66 billion, or 62 percent of ad revenue, compared to approximately $660 million, or 41 percent of ad revenue in the second-quarter of 2013. Desktop ad revenue was up 8 percent from last year. “That [mobile advertising growth] was the big complaint about Facebook three quarters ago,” Bliss said. “They seem to have rectified that situation.”

Facebook stock has been moving higher over the last couple of months. The stock is currently trading near all time highs and looks poised to continue. Analyzing the price trend and its strength can be done using key simple moving averages. What are the key moving averages? The 50-day (pink), 100-day (blue), and 200-day (yellow) simple moving averages. As seen in the daily price chart below, Facebook is trading above its rising key averages which signal neutral to bullish price action in the near-term. 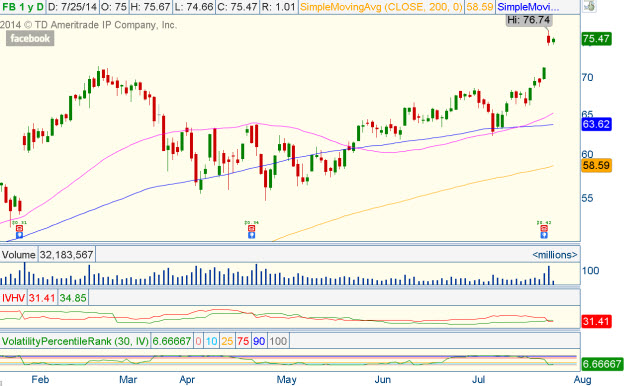 Facebook has seen increasing earnings and revenue figures over the last four quarters. From these numbers, the markets have been pleased with Facebook’s recent earnings announcements.

Facebook looks to provide a valuable social networking experience to its users, developers, and advertisers. The stock has been moving higher over the last couple of months and is currently trading near all time highs. Over the last four quarters, earnings and revenues have been increasing, which has left investors pleased. Relative to its peers and sector, Facebook has been a relative year-to-date performance leader. Look for Facebook to continue to OUTPERFORM.