Can McDonald’s Break Past Investor Fears?

With shares of McDonald’s (NYSE:MCD) trading around $99, is MCD an OUTPERFORM, WAIT AND SEE, or STAY AWAY? Let’s analyze the stock with the relevant sections of our CHEAT SHEET investing framework:

McDonald’s franchises and operates McDonald’s restaurants in the United States, Europe, Asia Pacific, the Middle East, Africa, Canada, and Latin America — so just about every part of the world. Its restaurants offer various food items, soft drinks, coffee, and other beverages, as well as breakfast menus. The products provided by McDonald’s fulfill cravings at competitive prices in convenient locations worldwide. The McDonald’s craze shows no signs of slowing, so the company has continued its expansion to just about every nation on the globe. As consumers continue to enjoy McDonald’s products, look for it to see rising profits.

McDonald’s Canada is facing investigation after a foreign worker from Belize went public with his story of “modern day slavery.” Jamie Montero, along with four other workers from Belize, were forced to live an apartment where they paid absurdly high rent to the company, which deducted the money from their paychecks and refused to pay the workers overtime. Jamie Montero came to Edmonton, Alberta, along with four others in September 2013, to work at McDonald’s in the hopes of saving money that he could then send home to his family in Belize. The five workers quickly realized they would hardly be able to live in Canada, let alone send money home to their families. Records indicate that the workers were paid $11 an hour, and McDonald’s took $280 out of their pay each bi-weekly pay period, according to a report from CBC News on Thursday.

McDonald’s housed Montero and his co-workers at a penthouse apartment in downtown Edmonton. Records suggest the the fast food giant charged the Belizeans $600 more to live there than what the corporation had paid the landlord in rent, and Montero says that the apartment was very far from the McDonald’s where he worked; “it was too far away and too expensive,” Montero told CBC News, adding that his commute was more than an hour on public transit. “They brought us here and they are this big huge corporation. We felt that we didn’t have a chance to even voice our opinion because they brought us here so they could ship us back whenever they wanted to,” said Montero. “It was like modern day slavery.” The corporation has since required all foreign workers to sign a contract which stipulates that they will not speak to the media.

McDonald’s stock has been trading sideways over the last couple of quarters. The stock is currently pulling back and may need time to consolidate before heading higher. Analyzing the price trend and its strength can be done using key simple moving averages. What are the key moving averages? The 50-day (pink), 100-day (blue), and 200-day (yellow) simple moving averages. As seen in the daily price chart below, McDonald’s is trading above its rising key averages which signal neutral to bullish price action in the near-term. 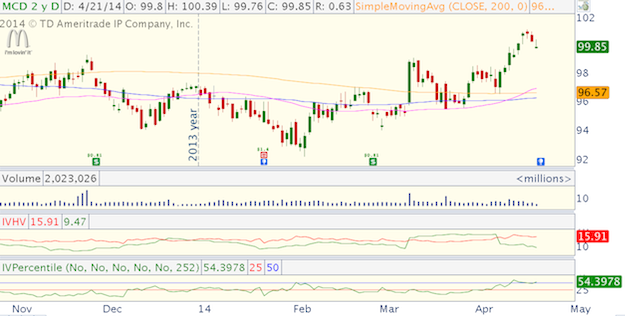 McDonald’s has seen increasing earnings and revenue figures over the last four quarters. From these numbers, the markets have had conflicting feelings about McDonald’s recent earnings announcements.

McDonald’s has been a relative performance leader, year-to-date.

McDonald’s is a well-recognized company that fulfills cravings and demand for quick food choices that many consumers across the globe enjoy. McDonald’s Canada is facing investigation after a foreign worker from Belize went public with his story of “modern day slavery.” The stock has been trading sideways over the last couple of quarters and is currently pulling back. Over the last four quarters, earnings and revenues have been rising. However, investors have had conflicting feelings about recent earnings announcements. Relative to its peers and sector, McDonald’s has been a year-to-date performance leader. Look for McDonald’s to OUTPERFORM.