Can Silver Shine Brighter Than Gold?

When we think of gold, we think of the solid, safe-haven, value-holding, inflation-hedging, shiny, yellow metal that lets us sleep at night knowing the governments of the world cannot print it out of existence. Gold is the big cheese in the precious-metals investing community. There’s no doubt that gold should be a part of everyone’s investment portfolio, but it’s important not to forget gold’s little brother: silver.

Silver holds all of the same characteristics that make gold a great monetary metal. Silver is durable, malleable, easily recognizable, portable, divisible, and uniform (one silver coin is basically the same as the next). It is also scarce enough to make it valuable for smaller transactions. Most important of all, as with gold, no amount of money printing will reduce your physical holdings of silver by one bit.

What makes silver even more attractive than gold is its potential upside. There are several reasons why silver may outperform gold in the coming years. They are outlined below. After examining these reasons, we’ll explore the recent shortage of Silver Eagles at the U.S. Mint and what this all means for the price of silver in the long run.

Historically, silver has traded at about a 16:1 ratio to gold. At today’s current spot prices, silver is trading at closer to 55:1. If we assume that silver will eventually return to its historic ratio, the current deviation could imply one of three scenarios:

1) Gold will drop off a cliff

3) Silver will skyrocket to all-time highs

Of course, anything is possible, but if you believe that gold will rise as the dollar falls, what does that say about silver? Perhaps $100 per ounce does not seem so unreasonable.

Reason #2: The Metal of All Trades

Many of us think of silver as an investment metal, but silver’s main source of demand comes from industrial uses. In 2011, coin demand only made up about 10 percent of total demand for silver. The rest was applied, in everything from photography to jewelry and electronics. There are even some instances of silver replacing platinum in catalytic converters.

Although demand for photographic film has declined in recent years, silver is finding new industrial homes. Applications include LED technology, RFID chips, solar panels, new and more effective batteries, water purification, washing machines, air conditioners, and refrigeration. (This is by no means an exhaustive list of silver’s applications. There are literally dozens if not hundreds of ways silver can be used.)

With emerging markets growing, the populations of these countries will demand more electronics, cleaner water, and cooler homes in the summer. As the standard of living increases for those previously living in poverty, the demand for silver’s many applications will increase as well.

The sheer number of industrial applications for silver gives a very solid, diversified base to the market, and it is therefore less affected by swings in the economy. Even during the period between 2008 and 2009 — the worst of the financial crisis — industrial demand for silver only decreased by 6 percent, bounced right back the next year, and has increased every year since. The bottom line is that the industrial demand for silver is here to stay, and this has real implications for prices, as we’ll discuss further below.

While the industrial market is an important piece of silver demand, we at the Hard Assets Alliance are also intently focused on investment demand. We see investment demand increasing. Perhaps the best indication of the disconnect between physical and paper markets is the spread between the spot price, which can be highly affected by moves in the paper market, and the premiums paid for physical coins. Some reports are saying that premiums have doubled recently, indicating that physical demand is increasing despite the spot prices reported in mainstream financial media. The data below support this.

Purchases of physical metal the world over have increased by leaps and bounds since 2008. According the CPM Group’s annual silver report, worldwide demand for silver coins reached just over 88 million ounces in 2011. 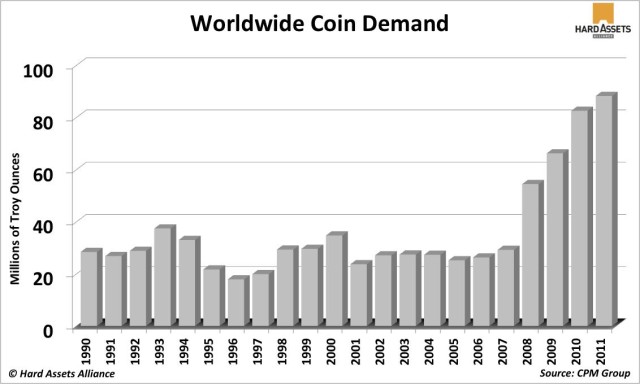 While we don’t have CPM’s annual data for 2012 as of the date this was written, we can use other sources to gauge where physical demand is headed in the future.

The U.S. Mint — one of the most popular places to purchase silver in the world — publishes monthly statistics of silver coin sales. Buyers of U.S. Mint coins have ignored the historic 16:1 ratio and have purchased silver at much higher multiples than gold. The graph below charts the historic ratio between gold and silver coins sold by the U.S. Mint since January of 2012. 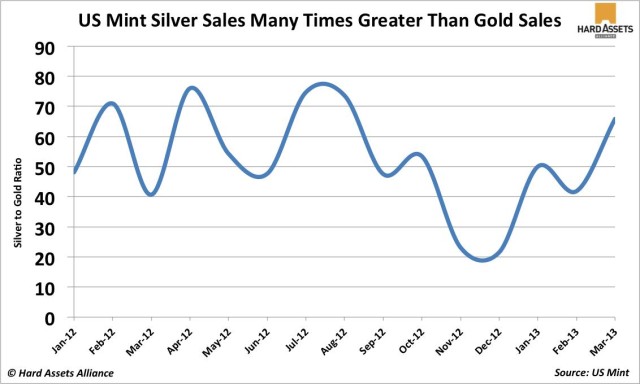 What explains this behavior? The answer is simple: silver is cheap relative to gold, and investors know it.

Shortage at the U.S. Mint

The U.S. Mint suspended the sale of its 2013 Silver Eagles after selling out of the 2012 vintage a few months ago. Some are attributing the early 2013 surge to the suspension and the resulting pent-up demand. However, the real question remains: How did the U.S. Mint run out of silver coins? With 2011 being the best year for the Mint in history, why was it unable to plan for the appropriate volume in the following year?

Some are claiming that there is a shortage in silver, and that the Mint was unable to acquire enough raw silver to service all the demand. Speculations aside, the suspension highlights a potentially alarming scenario: What if the suspension had been for longer than only a few weeks? With 2013′s hot start, can we count on the Mint to produce enough coins to satisfy the growing demand?

Keep that in the back of your mind for now and consider another point. CPM Group’s reported total mine production in 2011 was about 775 million ounces. The report for total demand, including both coins and industrial applications, was 950 million ounces. Luckily, secondary supply (or scrap) provided 282 million ounces in the same year. However, as demand for coins increases, more and more silver will go into the storage vaults of investors and out of the hands of industry.

Thus, the market could become more dependent on the scrap supply for its industrial needs, as more and more mine production goes toward minting coins. As the inevitable tug of war ensues between the industrial and investment markets, can we expect supply to be readily available for all of our investment needs? It’s tough to say.

The shortage at the U.S. Mint may have only been a short-term blip on the radar. However, it gave us a small taste of what may lie in our future if silver demand begins to take off. The question you will need to answer for yourself is: Was the suspension a one-time planning hiccup or the result of a real shortage?

Putting It All Together

Silver’s potential for upside is huge, and the metal is only getting scarcer as coin demand increases worldwide. As living standards rise in the developing world, the industrial demand for silver will rise to meet the needs of the people. Currency debasement is showing no signs of slowing, and this only serves to fuel silver’s upward trajectory.

These factors have provided an interesting potential win-win situation for silver investors. If fiat currencies collapse, silver — along with gold — will serve as a secure way to preserve wealth. If the economy picks up, industrial demand for silver will increase, pushing prices higher. Either way, silver is going higher. We can’t think of a better way to preserve your savings.

Originally written for the website of the Hard Assets Alliance, an industry association of trusted economic and investment research firms that fosters a better understanding of precious metals markets and offers a one-of-a-kind physical precious metals trading platform to retail investors.