Can Wal-Mart Continue to Outperform With a New CEO?

With shares of Wal-Mart (NYSE:WMT) trading around $81, is WMT an OUTPERFORM, WAIT AND SEE, or STAY AWAY? Let’s analyze the stock with the relevant sections of our CHEAT SHEET investing framework.

Wal-Mart operates retail stores in various formats around the world. The company aims to price items at the lowest price every day. Wal-Mart operates in three business segments: the Walmart U.S. segment, the Walmart international segment, and the Sam’s Club segment. It manages retail stores, restaurants, discount stores, supermarkets, super centers, hypermarkets, warehouse clubs, apparel stores, Sam’s Clubs, neighborhood markets, and other small formats, as well as Walmart.com and SamsClub.com. Through its retail channels, Wal-Mart is able to provide a variety of products and services at affordable prices to consumers and companies worldwide.

Wal-Mart Stores said that longtime company executive Doug McMillon will replace CEO Mike Duke, who plans to retire early next year. McMillon, 47, is the current president and CEO of Walmart International, a role he has filled since January 2009. He’ll officially take the helm on February 1, while he was named to the retailer’s board effective immediately.

Wal-Mart stock has made positive progress in recent quarters. The stock is currently surging higher, trading near highs for the year. Analyzing the price trend and its strength can be done using key simple moving averages. What are the key moving averages? The 50-day (pink), 100-day (blue), and 200-day (yellow) simple moving averages. As seen in the daily price chart below, Wal-Mart is trading above its rising key averages, which signals neutral to bullish price action in the near-term. 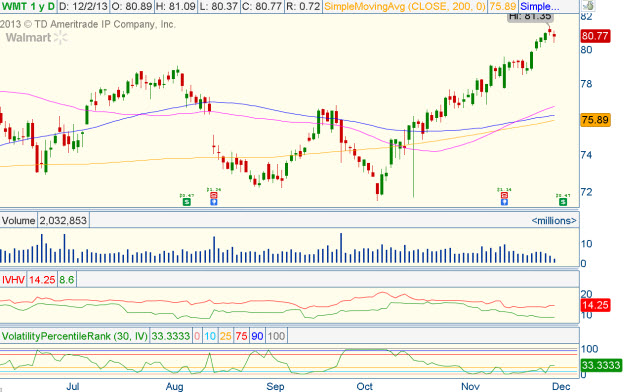 What does this mean? This means that investors or traders are buying a minimal amount of call and put options contracts as compared to the last 30 and 90 trading days.

Wal-Mart has seen increasing earnings and revenue figures over the last four quarters. From these numbers, the markets have been pleased with Wal-Mart’s recent earnings announcements.

How has Wal-Mart stock done relative to its peers – Target (NYSE:TGT), Costco (NASDAQ:COST), and Kohl’s (NYSE:KSS) — and sector?

Wal-Mart has been an average relative performer, year-to-date.

Wal-Mart is a retail company that provides a variety of products and services to consumers and companies worldwide. The stock has made some progress in recent quarters and is currently surging higher. Over the last four quarters, earnings and revenues have been increasing, which has pleased investors in the company. Relative to its peers and sector, Wal-Mart has been an average year-to-date performer. Look for Wal-Mart to continue to OUTPERFORM.