Does 21st Century Fox Have a Bright Future?

With shares of 21st Century Fox (NASDAQ:FOXA) trading around $34, is FOXA an OUTPERFORM, WAIT AND SEE, or STAY AWAY? Let’s analyze the stock with the relevant sections of our CHEAT SHEET investing framework:

Investors in 21st Century Fox, excluding chairman and CEO Rupert Murdoch and his family, have voted to separate the roles of chairman and CEO of the company by a 2-to-1 margin, as it’s believed the Murdochs have too much control over the company. According to a regulatory filing seen by Bloomberg, shareholders representing 147 million Class B shares in the company have voted for having an independent chairman at the company’s annual meeting last week.

21st Century Fox stock has been trending higher since its initial public offering, earlier this year. The stock is currently at all time highs and looks ready to continue. Analyzing the price trend and its strength can be done using key simple moving averages. What are the key moving averages? The 50-day (pink), 100-day, and 200-day simple moving averages. As seen in the daily price chart below, 21st Century Fox is trading above its rising key averages, which signal neutral to bullish price action in the near-term. 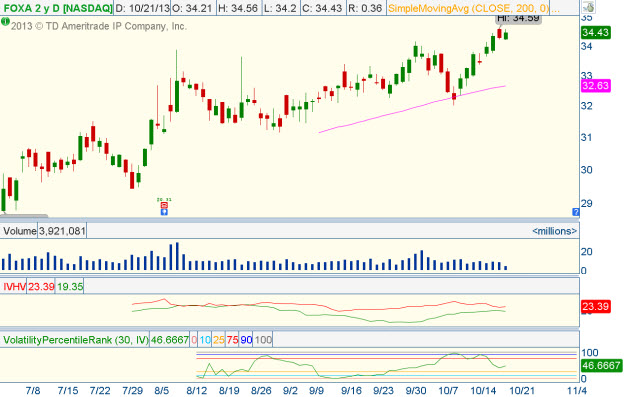 21st Century Fox has been a relative performance leader, year-to-date.

21st Century Fox is a cable, broadcast, film, and pay television provider around the world. In recent news, the company’s newest channel, Fox Sports 1, comes to life Saturday. Investors in the company have voted to separate the roles of Chairman and CEO as they believe that the Murdoch family has too much influence. The stock has been trending higher since its IPO and is now at all time highs. Over the last four quarters, earnings, and revenues have been mixed which has left investors to expect more from the company. Relative to its peers and sector, 21st Century Fox has been a year-to-date performance leader. Look for 21st Century Fox to continue to OUTPERFORM.