Does Coca-Cola Support a Rising Stock?

With shares of Coca-Cola (NYSE:KO) trading around $38, is KO an OUTPERFORM, WAIT AND SEE, or STAY AWAY? Let’s analyze the stock with the relevant sections of our CHEAT SHEET investing framework:

The highly controversial new anti-gay law in Russia is leading to unwanted complications for overseas sponsors of the Sochi Olympic Games set for next year, which include Coca-Cola and McDonald’s (NYSE:MCD). The prospect of protests at Sochi against the repressive laws (and presumably the sponsors) is leaving them with an uneasy feeling regarding potential damage to their public images. The law disallows the distribution of information to minors that “promotes” same-sex relationships. Major sponsors like Coca-Cola and McDonald’s are worried about the risk of high-profile protests at the Games, and that demonstrations like that could draw attention to them for the wrong reasons and ignite calls for a boycott of their products, such as the one of Florida orange juice back in the 1970s.

Coca-Cola stock has moved higher in the last several years. The stock has struggled to make significant progress this year and is now trading near yearly opening prices. Analyzing the price trend and its strength can be done using key simple moving averages. What are the key moving averages? The 50-day (pink), 100-day (blue), and 200-day (yellow) simple moving averages. As seen in the daily price chart below, Coca-Cola is trading below its key averages, which signal neutral price action in the near-term. 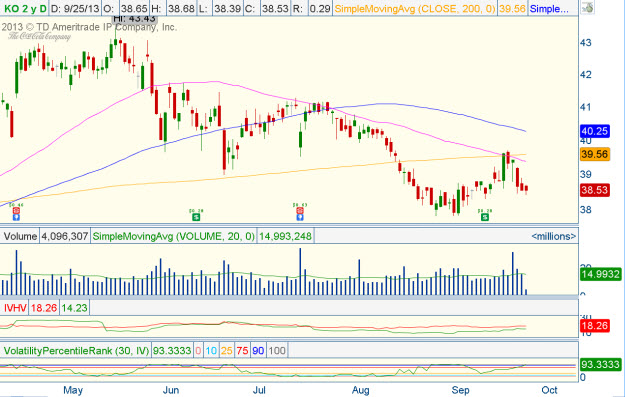 What does this mean? This means that investors or traders are buying a very significant amount of call and put options contracts as compared to the last 30 and 90 trading days.

Coca-Cola has seen mixed earnings and revenue figures over the last four quarters. From these numbers, the markets have not been pleased with Coca-Cola’s recent earnings announcements.

Coca-Cola has been a relative performance leader, year-to-date.

Coca-Cola is an iconic company that provides beverage products through its recognized brands to consumers and companies in just about every country worldwide. The company, a sponsor of Sochi Olympic Games next year, may be seeing unwanted complications due to an anti-gay law in Russia. The stock has moved higher in the last several years but has been struggling to make significant progress this year. Over the last four quarters, earnings and revenues have been mixed which has not really pleased investors. Relative to its peers and sector, Coca-Cola has been a year-to-date performance leader. WAIT AND SEE if Coca-Cola and its sector can improve this quarter.