Does Goldman Sachs Have a Bright Future?

With shares of Goldman Sachs (NYSE:GS) trading around $162, is GS an OUTPERFORM, WAIT AND SEE, or STAY AWAY? Let’s analyze the stock with the relevant sections of our CHEAT SHEET investing framework:

Goldman Sachs is engaged in investment banking, securities, and investment management. It provides a range of financial services to a substantial and diversified client base that includes corporations, financial institutions, governments, and high net worth individuals. The company operates in four segments: investment banking, institutional client services, investing and lending, and investment management. Through its segments, Goldman Sachs provides valuable investment services to consumers and companies worldwide.

Fabrice Tourre, the former Goldman Sachs vice president found liable for his part in selling a pre-crisis mortgage security that lost value, said he won’t file an appeal in the civil case. “While my lawyers have advised me there are strong grounds to appeal, I prefer to move forward with my education and close this difficult chapter of my life,” Tourre said in a statement today. “I look forward to finishing my Ph.D. in economics and to making meaningful contributions to my field.” Tourre, 35, was found liable August 1 after a jury trial at which the U.S. Securities and Exchange Commission claimed he intentionally misled investors in a subprime-mortgage vehicle called Abacus 2007-AC1. In March, he was ordered to pay more than $825,000 in penalties.

The lawsuit was one of the government’s most prominent efforts to fix responsibility for the housing market crash, which helped precipitate the worst economic downturn since the 1930s. Critics have faulted the SEC for not doing more to police the abuses that helped lead to the crisis or to pursue top financial executives they say are responsible. Goldman Sachs, which paid Tourre’s legal fees, settled SEC claims over the Abacus transaction in July 2010 for $550 million, a record at the time. No senior Goldman Sachs executives were questioned in Tourre’s trial. Tourre lied about the role played by the hedge fund firm run by billionaire John Paulson, which helped choose the securities underlying Abacus then made a billion-dollar bet it would fail, the SEC said. U.S. District Judge Katherine Forrest ruled in March that Tourre, who is in the middle of a six-year economics Ph.D. program at the University of Chicago, couldn’t seek reimbursement from Goldman Sachs for $650,000 in civil penalties and repaying $175,463 of his 2007 bonus, plus interest.

T = Technicals on the Stock Chart Are Weak

Goldman Sachs stock has not made significant progress over the last couple of quarters. The stock is currently pulling back and may need time to consolidate before heading higher. Analyzing the price trend and its strength can be done using key simple moving averages. What are the key moving averages? The 50-day (pink), 100-day (blue), and 200-day (yellow) simple moving averages. As seen in the daily price chart below, Goldman Sachs is trading between its rising key averages which signal neutral price action in the near-term. 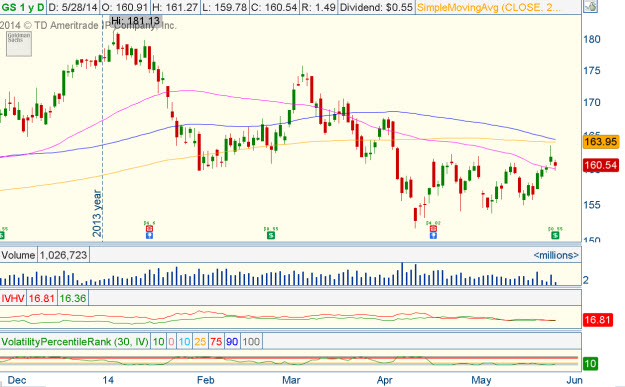 Goldman Sachs has seen mixed earnings and decreasing revenue figures over the last four quarters. From these numbers, the markets have had mixed feelings about Goldman Sachs’s recent earnings announcements.

Goldman Sachs has been a poor relative performer, year-to-date.

Goldman Sachs is a bellwether in the financial sector that strives to provide valuable financial products and services to consumers and businesses around the world. Fabrice Tourre, the former Goldman Sachs vice president found liable for his part in selling a pre-crisis mortgage security that lost value, said he won’t file an appeal in the civil case. The stock has not made significant progress over the last couple of quarters and is currently pulling back. Over the last four quarters, earnings have been mixed while revenues have been decreasing, which has produced mixed feelings among investors. Relative to its peers and sector, Goldman Sachs has been a poor year-to-date performer. WAIT AND SEE what Goldman Sachs does next.