Does Netflix Have Further Upside to Go?

With shares of Netflix (NASDAQ:NFLX) trading around $305, is NFLX an OUTPERFORM, WAIT AND SEE, or STAY AWAY? Let’s analyze the stock with the relevant sections of our CHEAT SHEET investing framework:

Netflix stock has been on an explosive run throughout most of the last several quarters. The stock is now trading near all-time highs and looks ready to tackle new prices. Analyzing the price trend and its strength can be done using key simple moving averages. What are the key moving averages? The 50-day (pink), 100-day (blue), and 200-day (yellow) simple moving averages. As seen in the daily price chart below, Netflix is trading above its rising key averages, which signal neutral to bullish price action in the near-term. 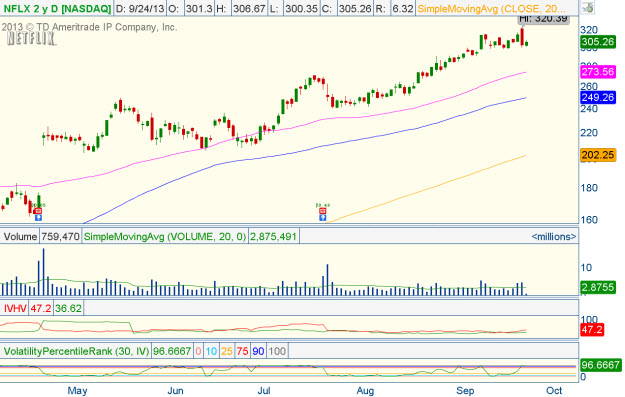 What does this mean? This means that investors or traders are buying a very significant amount of call and put options contracts as compared to the last 30 and 90 trading days.

Netflix has seen mixed earnings and rising revenue figures over the last four quarters. From these numbers, the markets have had conflicting feelings about Netflix’s recent earnings announcements.

Netflix is a streaming services that provides video entertainment to consumers in the United States. House of Cards, a Netflix original show, won an Emmy for best director over the weekend, a first for a web series. The stock has been exploding much higher in recent months and is now trading near all time high prices. Over the last four quarters, earnings have been mixed while revenues have been rising, which has produced conflicting feelings among investors. Relative to its peers and sector, Netflix has been a year-to-date performance leader. Look for Netflix to continue to OUTPERFORM.