Fed: Get Used to the Bubble Economy 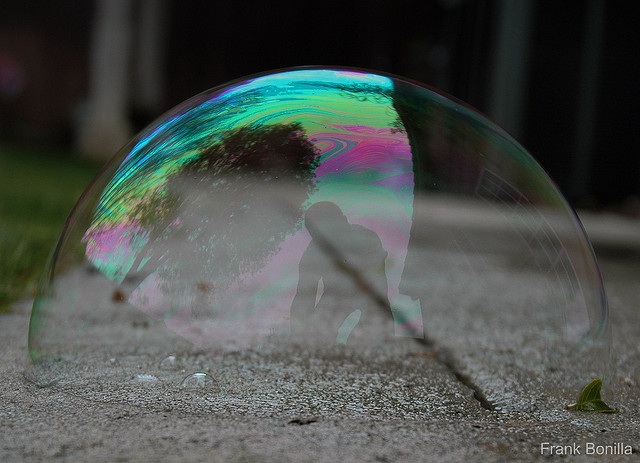 “House prices have risen by nearly 25 percent over the past two years,” Ben Bernanke said in 2005. ”Although speculative activity has increased in some areas, at a national level, these price increases largely reflect strong economic fundamentals.”

If the Federal Reserve had a favorite brand of gum, it would undoubtedly be Bubblicious, an American classic known for producing large bubbles and short-lasting flavor. While blowing bubbles can be fun while it lasts, there is usually a sticky mess to clean up at the end. And despite the lessons of yesteryear, at least one central banker believes investors should get used to the boom-and-bust cycle.

A financial bubble occurs when a rapid expansion in a particular market or asset is followed by a steep contraction. Prices — driven by unwarranted enthusiasm — rise far above where they should be, considering fundamentals or intrinsic value. Examples in recent years include the tech bubble that peaked more than a decade ago and the housing bubble that punctuated the Great Recession.

In both instances, the Federal Reserve responded by using one of its favorite tactics: lowering the federal funds rate, which is the interest rate depository institutions use to lend to each other overnight. Since intervening with interest rates often distorts segments of the economy, many people believe the Federal Reserve aided in blowing a bigger housing bubble and think there is currently a bubble taking place in central banking.

Central banks around the globe have cut interest rates to historic lows and launched unprecedented bond-buying programs known as quantitative easing. When converted to U.S. dollars, the four major central banks have expanded their balance sheets to more than $13 trillion, according to Hayman Capital. In comparison, the amount was $3 trillion 10 years ago. Central banks now account for at least a quarter of all global gross domestic product, a sharp increase from only 10 percent in 2002.

No matter how large a bubble grows, the pain from the burst will be no match for unwarranted enthusiasm and “easy” money. At the National Association for Business Economics, Federal Reserve Bank of San Francisco President John Williams explained: “We need to acknowledge that investors and financial markets do not behave the way rational asset price theory implies. We need to incorporate these channels into the models we use for forecasting, risk analysis, and policy evaluation.”

How big are the costs associated with bubble blowing? New research from the Federal Reserve Bank of Dallas estimates that the Great Recession cost the U.S. economy $6 trillion to $14 trillion in output, or about $50,000 to $120,000 per American household. That is the equivalent of 40 percent to 90 percent of one year’s economic output. If the growth trend fails to return to historic norms, the costs will grow even larger.

The central bank explains: “The crisis consumed an enormous sum of financial and housing wealth. U.S. household net worth plunged $16 trillion, or 24 percent, from third quarter 2007 to first quarter 2009. In addition, it wiped out a huge amount of ‘human capital,’ both current wage income and discounted future wage income; that is, a household’s expectation of potential earning power. If the effects of the crisis are permanent, the path of consumption observed since 2007 suggests that the cost of the crisis may be more than double the $6 trillion to $14 trillion estimate.” 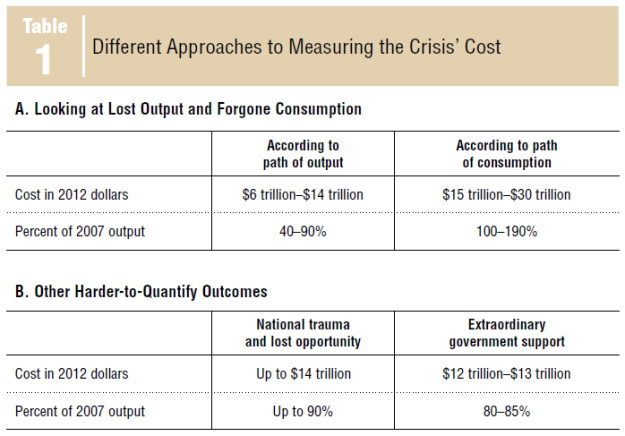