Frank Sinatra’s Car Collection: 10 of His Most Important Cars

Perhaps more than any other artist, Frank Sinatra’s career perfectly summed up the 20th century. He began singing professionally in 1935, and released his first record in 1939. He caused a pandemonium later paralleled by Elvis, The Beatles, and Michael Jackson all the way back in the ’40s, single-handedly made middle-agedom cool in the ’50s and ’60s, retired and came back in the ’70s, entered the ’80s with hit records, and released his multi-platinum selling final album in 1994. From music to movies to style to politics, if you look back over the last century, you’re likely to find Sinatra somewhere in the mix. He wouldn’t have wanted it any other way.

And while his music is still beloved by millions, its his lifestyle that still continues to equally fascinate us. Simply put, he’s an icon — one who stayed at the top of his game for decades and continues to be the benchmark of how we measure class. For years, he was the wealthiest entertainer in the world, doing something that seems impossible today: Living in a way that people aspired to, not mocked. It’s no accident that Jay-Z compares himself to the man – 100 years on, he’s still the gold standard.

And like his style and attention to detail, Sinatra’s eye was extended to his cars. He loved them, and they were usually both stylish and perfectly of their times. So to celebrate the man, we went digging and found 10 of the most important rides to ever reside in Frank Sinatra’s garage, from his first car to the last. 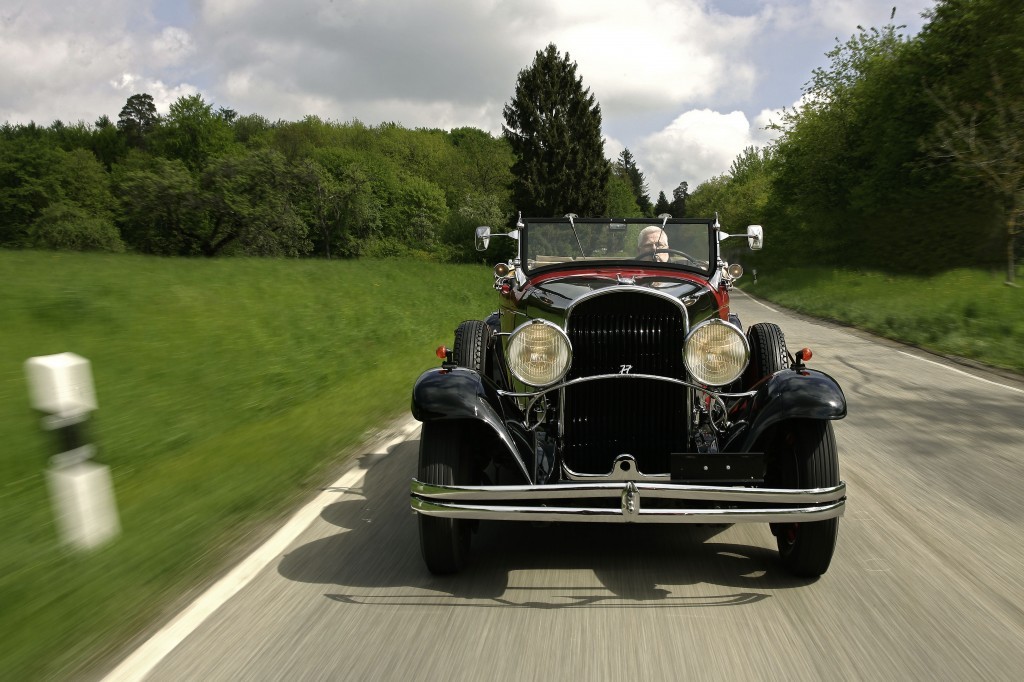 Before he was a star, Sinatra was one of countless “boy singers” in the New York area looking for his big break. According to James Kaplan’s biography The Voice, in the mid-’30s Sinatra got his first break with the group The Four Flashes not because of his talents, but because he owned a car, a green Chrysler convertible. With Sinatra in their ranks, the group could now get to shows a lot easier. Unfortunately for them, ‘Ol Blue Eyes quickly left them in the dust. 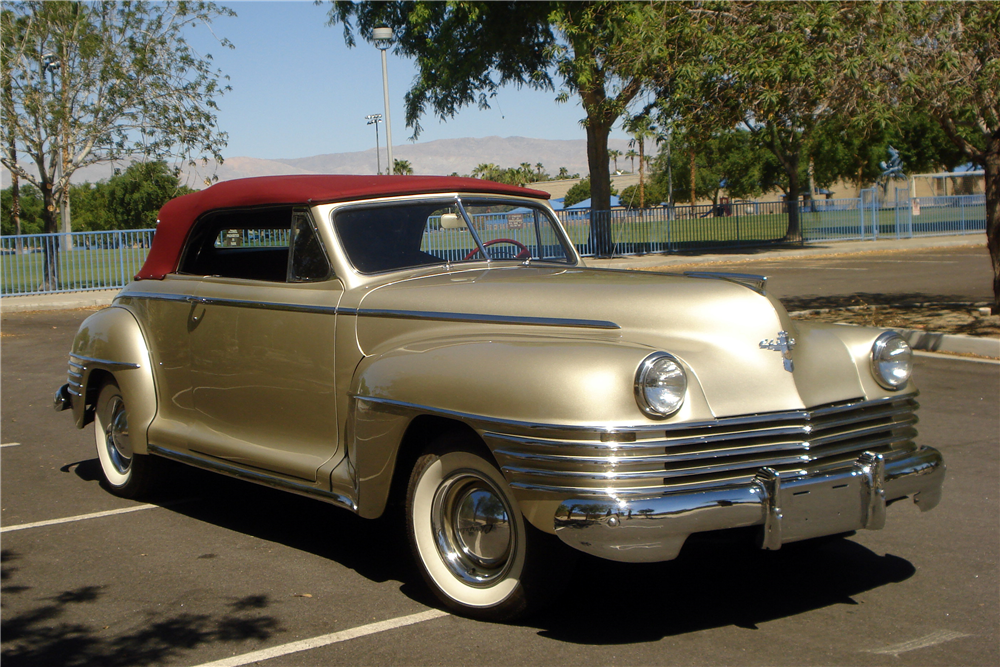 Even after he found fame, Sinatra stayed a loyal Chrysler man. When he married his first wife Nancy Barbato in 1939, they reportedly drove off to honeymoon in a brand new 1939 convertible. And in a snapshot taken just as he became a household name, Sinatra is seen sitting proudly behind the wheel of a 1942 convertible, one of just 36,586 cars Chrysler managed to eke out before production was halted by America’s entry into World War II. Today, even without Sinatra’s provenance, these cars are highly collectible, the ’42 pictured above fetched $34,100 at Barrett-Jackson’s Las Vegas auction this year. 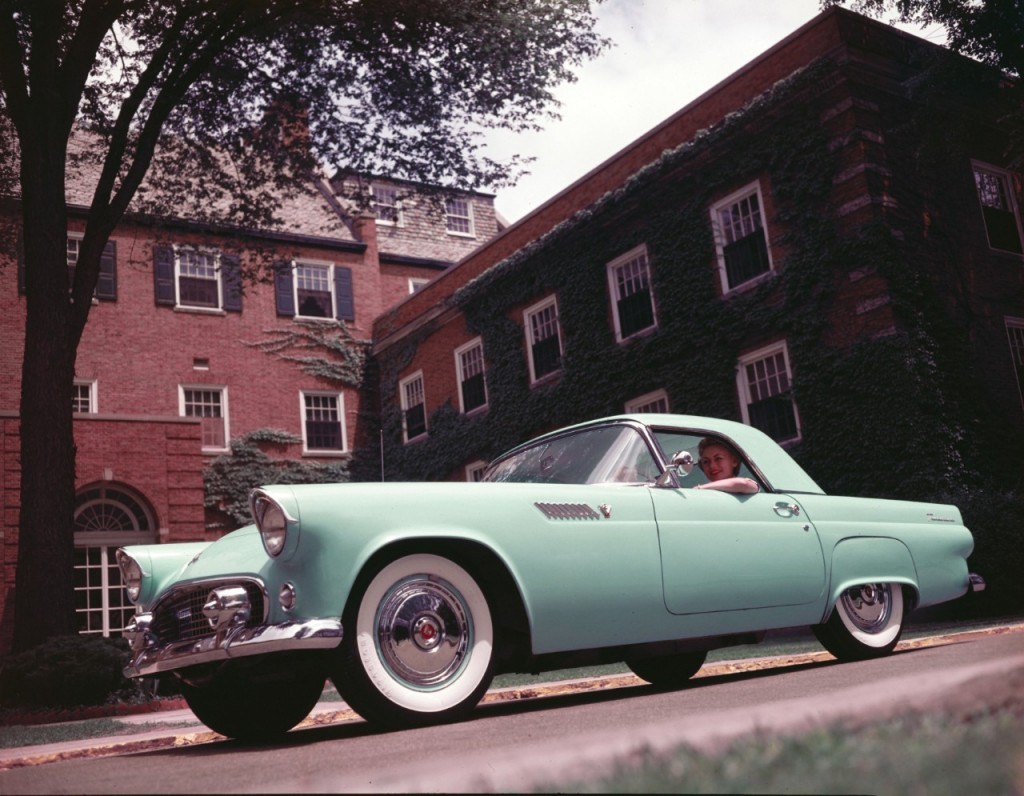 In the early ’50s, Sinatra’s career had come dangerously close to collapsing, but by mid-decade, he had a second Oscar under his belt (for 1953’s From Here to Eternity), and was the most famous entertainer in the world. With that came incredible wealth, and a healthy love of cars. Capitol Records bought Sinatra a black first-generation Thunderbird, which he was photographed in regularly. He was also said to buy T-Birds for his closest friends – and favorite girlfriends. 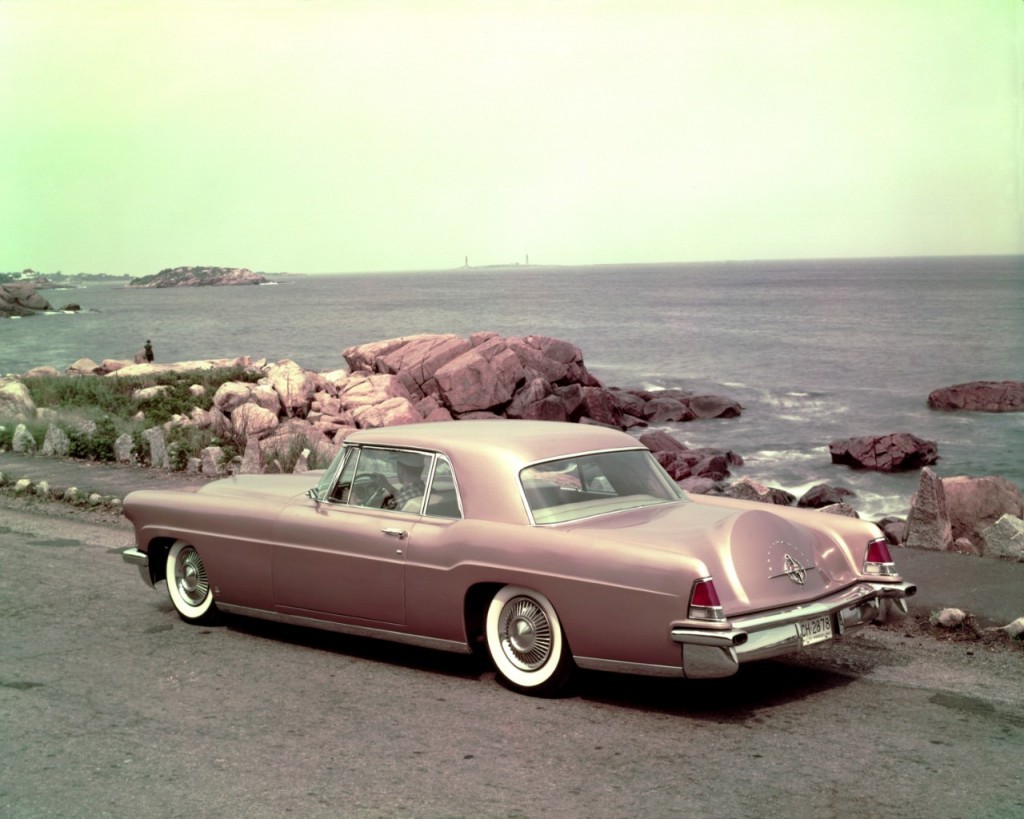 Spun off into its own brand in 1955, the Continental Mark II was one of the most beautiful luxury cars of the era. It was also one of the most expensive; at $10,000, it was twice as expensive as a Cadillac, and cost more than the Rolls Royce Silver Cloud – and Ford still lost money on each one sold. Its combination of exclusivity and style made it a natural fit for Sinatra, and he could be seen driving his Continental II around Las Vegas and Palm Springs, California. 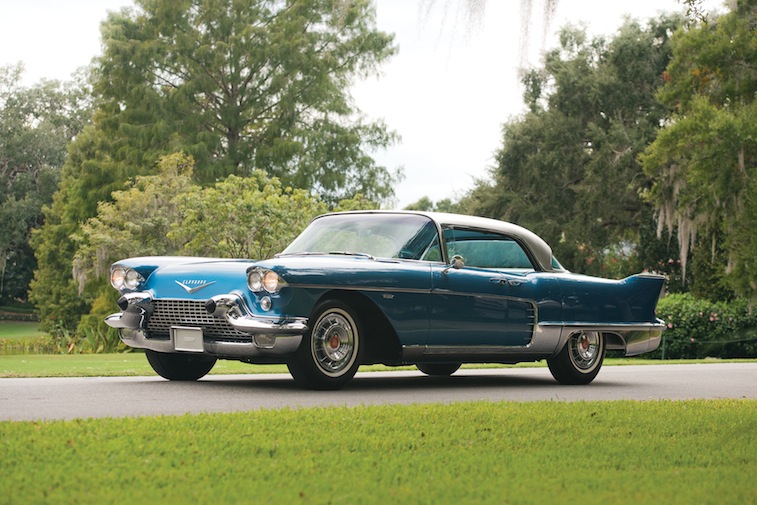 By 1958, the Continental had been returned to the Lincoln lineup. It was just as well, because that year Cadillac responded with the Eldorado Brougham, a $13,074 dream machine that was one of the most luxurious, exclusive, and advanced cars in the world. With space-age features like a self-leveling air suspension, power seats with memory, dual-level climate control, and cruise control, the Caddy was in many ways decades ahead of the competition. With only 304 cars built in ’58, it was the car to have in the late 50s. Sinatra loved them so much that he owned several, with one appearing alongside him in 1960s’ Ocean’s Eleven. Bonham’s sold one ex-Sinatra Brougham in 2009 for an undisclosed sum. It had been expected to fetch as much as $375,000. 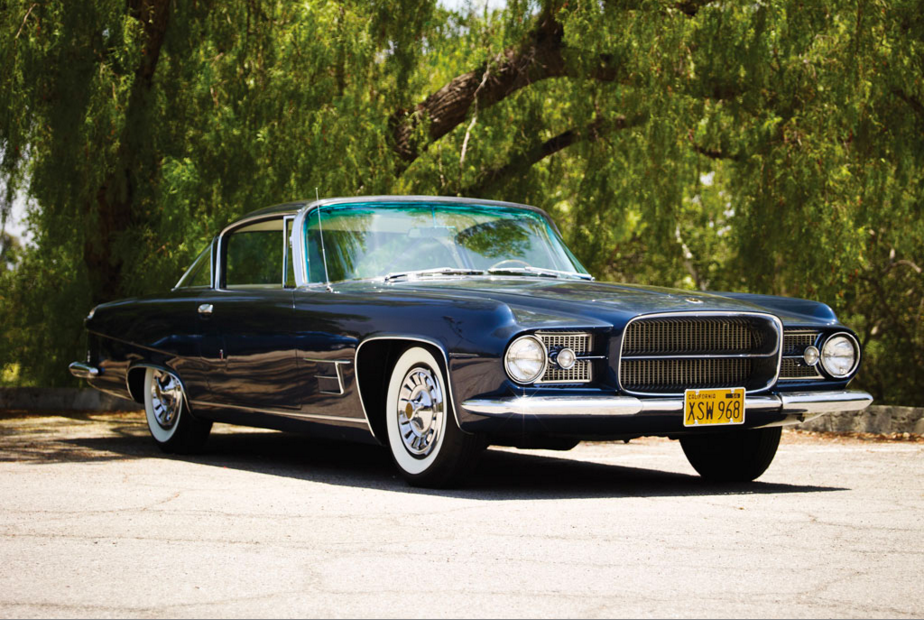 By the early ’60s, Sinatra was the first king of Las Vegas, and he and his Rat Pack ruled the entertainment industry. Meanwhile in Detroit, Dual Ghia was pioneering the method of hand-picking its owners (a practice later cribbed by Ferrari) and found a perfect match in the Rat Pack. With Chrysler running gear and a hand-built body made in Italy by Ghia, the $13,500 L6.4 was one of the most exclusive cars in the world, with just 26 produced – and most of them going to celebrities. Despite their price and exclusivity, there was something off about Sinatra’s car. He had celebrity customizer George Barris install a number of fail-safe components, including a backup fuel pump and brake circuits. Today, just 17 of the cars survive. This ’62 fetched an impressive $362,000 when RM Sotheby’s sold it at Monterey back in 2013. 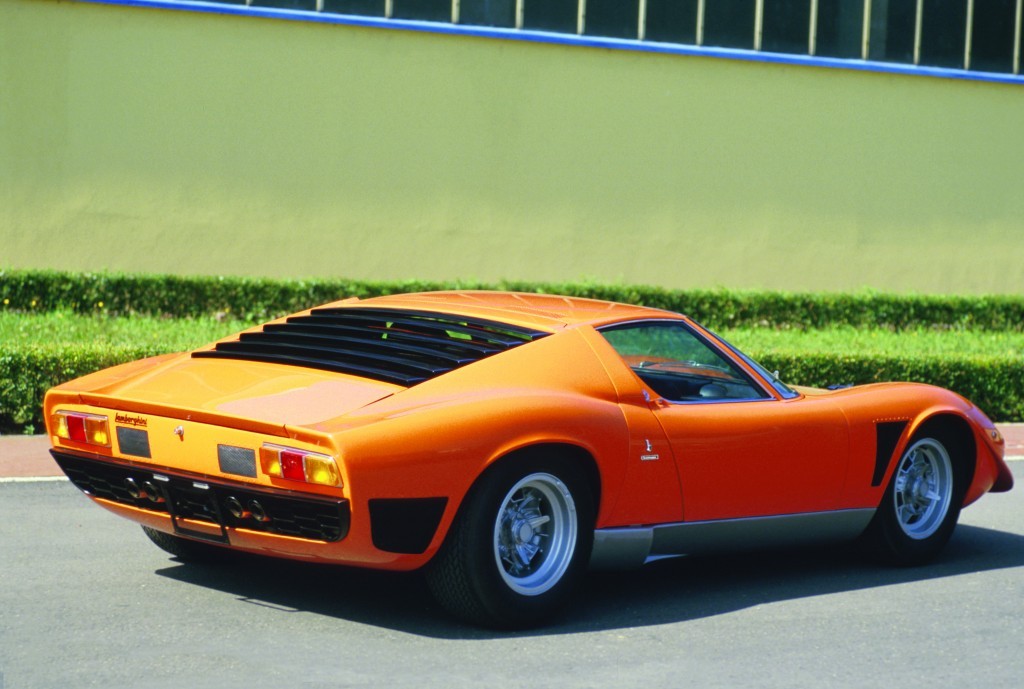 The Miura is generally accepted as the world’s first supercar, and it was impressive enough for Sinatra to take notice. So on December 12, 1969 – his 54th birthday – he treated himself to one. Personally ordered at Lamborghini’s Sant ‘Agata Bolognese headquarters, Sinatra ordered his mid-engined V12 Lambo in arancio metallico (orange being his favorite color) with a wild boarskin leather interior. Sinatra was so taken with his car that he allegedly said “You buy a Ferrari when you want to be somebody. You buy a Lamborghini when you are somebody.” Sinatra’s love affair with his Miura was short-lived, however. Within a few years, he had given it to a girlfriend, who quickly traded it in on a newer Countach. In 2004, Sinatra’s car was sold at auctionfor $150,000. Today, a Miura even without celebrity provenance trades hands for over $900,000. 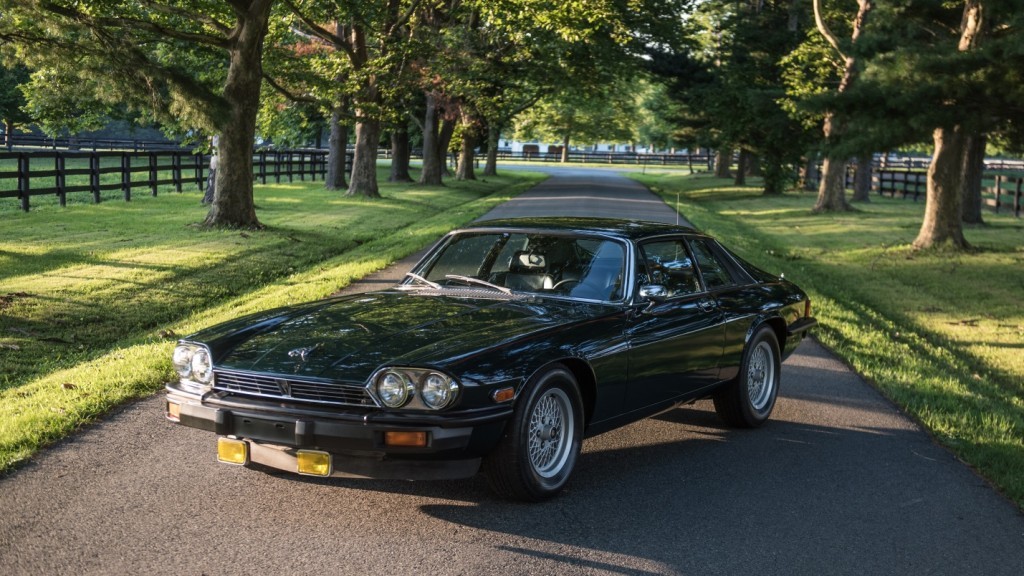 In 1975, Sinatra married for a fourth and final time to Barbara Marx. As part of their wedding, the two exchanged cars; Frank giving her a Rolls-Royce Silver Shadow with paint to match his eyes, and receiving a British racing green XJS. Introduced in 1975 to replace the aging E-Type, the XJS wasn’t as sporty as its predecessor, but it was a popular grand tourer that saw an impressive 21 year production run. Sinatra seemed to be a fan too – he later augmented his wedding car with a second, nearly identical 1989 model. The 1975 wedding cars were both sold this year by Russo and Steele, with the Jag fetching a mere $11,000. 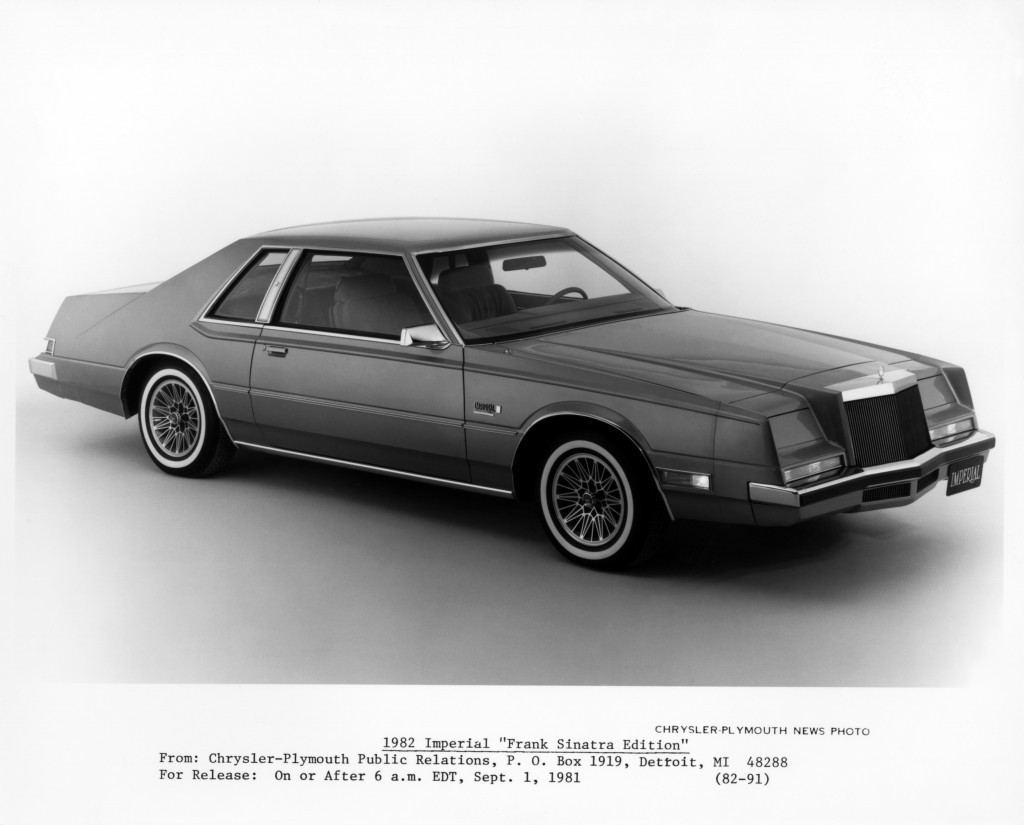 Sinatra liked his friends to be movers and shakers, and by the late ’70s he’d become close friends with Chrysler chief Lee Iacocca. As Iacocca moved to transform Chrysler into a profitable maker of affordable front-wheel drive vehicles, he also sought to revive the Imperial nameplate for a flagship personal luxury coupe to take on Cadillac Eldorado and Lincoln Continental Mark VI. Enlisting Sinatra’s star power to help sell the cars, Chrysler launched the Imperial “FS Edition,” with paint and interior to match Sinatra’s eyes, plus a special box under the dashboard that held 10 Sinatra cassettes. Unfortunately, reliability issues meant the $20,988 car was a huge flop for the brand, and it sold just 12,385 Imperials between 1981 and ’83 – with just 278 of them being FS Editions. 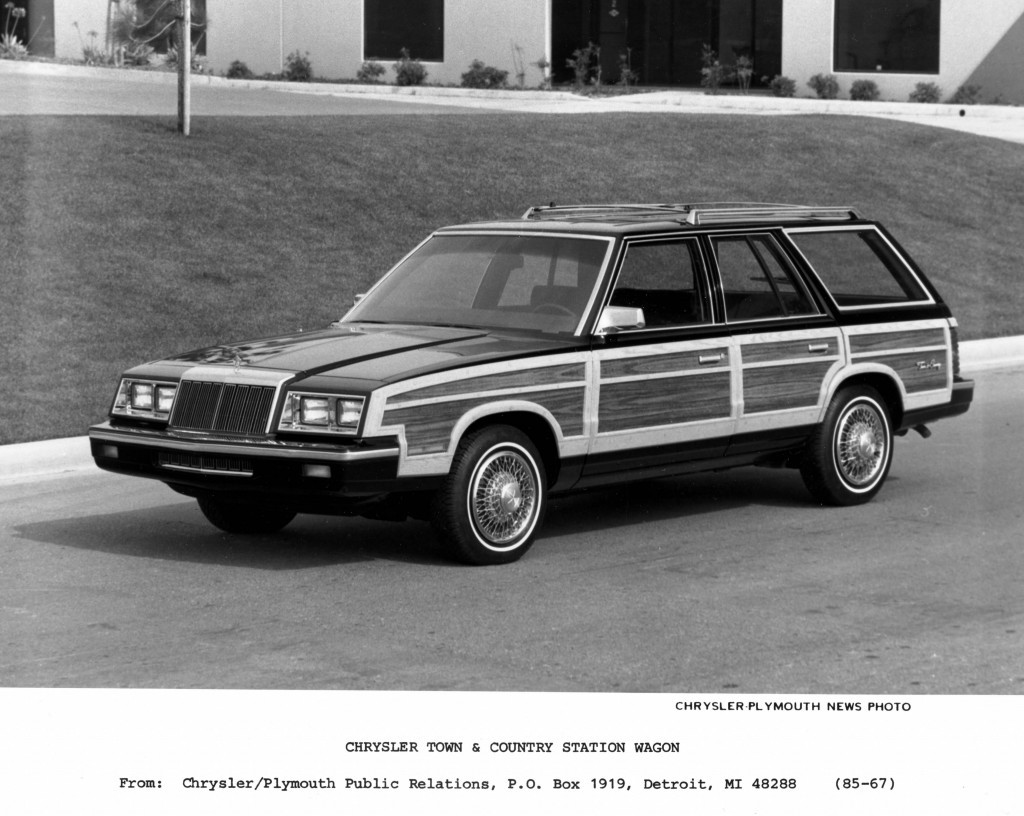 A few years after the Imperial, Sinatra bought a pedestrian 1985 Chrysler Town & Country station wagon to use while in Los Angeles. Based on Chrysler’s K-Car platform, the T&C didn’t exactly have the glamor or exclusivity of his earlier cars, but he seemed to have loved it – it’s said to be the last car he ever drove before his death in 1998. Today, the car has its own website (registered in 2011), and is listed for sale at £195,000 (roughly $290,000). So if you ever wanted to own both the most expensive K-Car in existence and Frank Sinatra’s last car, this is it.