Is Boeing a Solid Investment?

With shares of Boeing (NYSE:BA) trading around $124, is BA an OUTPERFORM, WAIT AND SEE, or STAY AWAY? Let’s analyze the stock with the relevant sections of our CHEAT SHEET investing framework:

Boeing revealed on Monday that it would be shuttering its C-17 production facility in Long Beach, California, three months ahead of schedule, now closing the plant in mid-2015 because of “current market trends and the timing of expected orders,” the Los Angeles Times reports. As a result, Boeing said it is prepared to write down $50 million in accounting charges in the first-quarter. The plant is 1.1 million square feet in size and produces the behemoth C-17 Globemaster III, a four-engined cargo jet that can carry 60-ton tanks, personnel, and medical gear transcontinentally, and has the added ability of being able to take advantage of short runways. The C-17 was first contracted by the Air Force in 1981, and took its first flight under the moniker of T-1 in 1991. Though the U.S. Air Force has received its last C-17 jet, Boeing still has a couple of foreign orders to fulfill before it shuts the facility down for good. The plant currently employs around 2,200 people.

According to the Los Angeles Times, ”the plant is one of the last vestiges of an era in which aviation and aerospace helped build Southern California’s middle class, and it was a major employer in Long Beach for decades,” the publication said. The company has already began reducing the workforce at the plant, and it plans to continue the cuts through closure. Boeing first announced its intentions to close the plant in September. Boeing built 223 C-17s for the Air Force, the last of which was delivered about a week prior to the announcement of the plant’s fate. As of yet, there are no plans to start a new manufacturing program at the facility. “Boeing has said some workers may be moved to other jobs inside the company, but many will have to enter a still-tough job market, with unemployment at 8.7 percent in Los Angeles County,” the Times said.

T = Technicals on the Stock Chart Are Weak

Boeing stock has struggled to make significant progress over the last couple of months. The stock is currently pulling back and may need time to consolidate before heading higher. Analyzing the price trend and its strength can be done using key simple moving averages. What are the key moving averages? The 50-day (pink), 100-day (blue), and 200-day (yellow) simple moving averages. As seen in the daily price chart below, Boeing is trading between its rising key averages which signal neutral price action in the near-term. 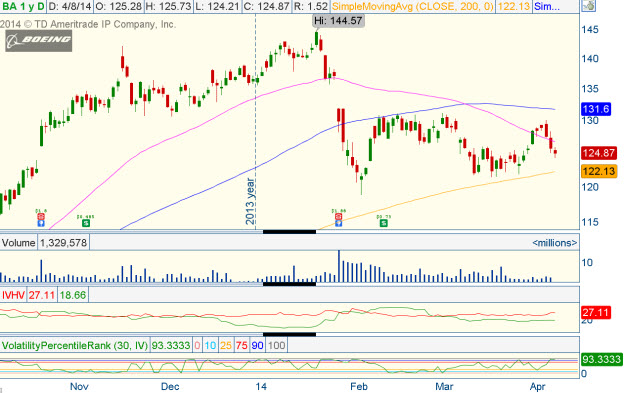 Boeing has seen increasing earnings and revenue figures over the last four quarters. From these numbers, the markets have had mixed feelings about Boeing’s recent earnings announcements.

Boeing has been an average performer, year-to-date.

Boeing is an aerospace company and provider of aircrafts and related products and services to corporations and governments worldwide. The company revealed on Monday that it would be shuttering its C-17 production facility in Long Beach, California, three months ahead of schedule. The stock has struggled to make significant progress and is currently pulling back. Over the last four quarters, earnings and revenue figures have increased. However, investors have had mixed feelings about recent earnings announcements. Relative to its peers and sector, Boeing has been an average year-to-date performer. WAIT AND SEE what Boeing does this quarter.