Is Netflix a Buy?

With shares of Netflix (NASDAQ:NFLX) trading around $384, is NFLX an OUTPERFORM, WAIT AND SEE, or STAY AWAY? Let’s analyze the stock with the relevant sections of our CHEAT SHEET investing framework:

Netflix has announced plans to expand into six European countries this year, introducing its online TV and movie streaming service to the French, German, and Swiss markets. The company, which created the popular House of Cards TV show, will also enter Austria, Belgium, and Luxembourg in late 2014, and will face different rules and competitors in each market. The online entertainment company will not have exclusive rights to its original show in all markets, as House of Cards has already been broadcast in Germany. Netflix will also have to face complex rules in France, where a film cannot be streamed on a subscription video service until three years after its release. But Netflix has some success competing in Europe, with more than 1.5m UK subscribers and 12.7 million users outside the United States. Details on programming and pricing in each country will be announced later, though in the UK, Netflix costs 5.99 pounds a month while a subscription in the Netherlands costs 8.99 euros (7.28 pounds) a month. The costs of launching in the new markets will keep Netflix’s international unit at a loss, the firm said in a letter to shareholders in April.

Netflix stock has struggled to make significant progress over the last couple of months. However, the stock is currently surging higher and looks set to continue. Analyzing the price trend and its strength can be done using key simple moving averages. What are the key moving averages? The 50-day (pink), 100-day (blue), and 200-day (yellow) simple moving averages. As seen in the daily price chart below, Netflix is trading between its rising key averages which signal neutral price action in the near-term. 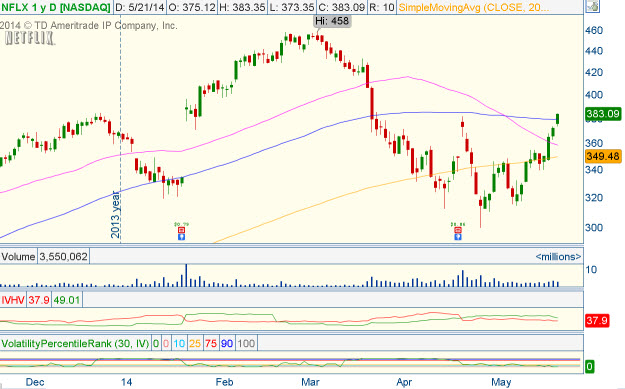 Netflix is a streaming service that provides video entertainment to consumers in the United States. The company has announced plans to expand into six European countries this year. The stock has struggled to make significant progress over the last couple of months, but is currently surging higher. Over the last four quarters, earnings and revenues have been rising, which has left investors pleased. Relative to its peers and sector, Netflix has been a year-to-date performance leader. Look for Netflix to OUTPERFORM.