Is Netflix Well-Positioned for the Future?

With shares of Netflix (NASDAQ:NFLX) trading around $342, is NFLX an OUTPERFORM, WAIT AND SEE, or STAY AWAY? Let’s analyze the stock with the relevant sections of our CHEAT SHEET investing framework:

It looks like Netflix has learned its lesson. On Friday, the company raised the price for new subscribers to its streaming video service from $7.99 to $8.99 per month. Existing customers have their price of $7.99 locked in for two years. Wouldn’t you know it, no one seems to be complaining. The reason this is notable is because of what happened last time it raised its prices. Back in 2011, subscribers paid $9.99 per month to watch streaming video and receive DVDs in the mail. Then the company decided to split the two services and charge $7.99 for each. That meant that if you wanted to maintain your access to their DVD rental and streaming services, you had to pay $16 per month, which amounted to a 60 percent price increase. New subscribers had to pay the new price immediately, but existing subscribers got a two-month window of paying the same amount. Customers were not happy and were very vocal. A 60 percent price increase was too much for many subscribers, leading some people to drop one service, and many others to drop Netflix altogether.

To make matters worse, Netflix also planned to rebrand its DVD rental service under the name Qwikster. The idea was to make Qwikster a completely separate company from Netflix, which would mean it’d have two separate websites and two separate subscription platforms. Customers to both services would have had to maintain two watch lists, two profiles, and two sets of movie ratings in order to keep their accounts in sync. All the while, apparently no one at Netflix had checked the availability of the @qwikster Twitter handle, which belonged to an often-unintelligible, pot-smoking teenager. The whole idea was very ill-conceived, causing investors to abandon ship in droves. Netflix’s stock quickly took a downturn, going from nearly $300 per share down to around $60 in four months. A few weeks later, Netflix CEO Reed Hastings wrote a blog post retracting some of the changes. “It is clear that for many of our members two websites would make things more difficult, so we are going to keep Netflix as one place to go for streaming and DVDs. This means no change: one website, one account, one password … in other words, no Qwikster.”

Netflix stock has struggled to make significant progress over the last couple of months. However, the stock is currently surging higher and looks poised to continue. Analyzing the price trend and its strength can be done using key simple moving averages. What are the key moving averages? The 50-day (pink), 100-day (blue), and 200-day (yellow) simple moving averages. As seen in the daily price chart below, Netflix is trading slightly below its rising key averages which signal neutral to bearish price action in the near-term. 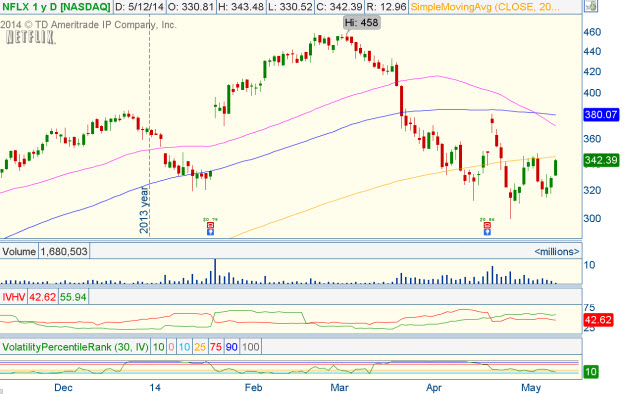 Netflix has been an average performer, year-to-date.

Netflix is a streaming service that provides video entertainment to consumers in the United States. On Friday, the company raised the price for new subscribers to its streaming video service from $7.99 to $8.99 per month. The stock has struggled to make significant progress over the last couple of months, but is currently surging higher. Over the last four quarters, earnings and revenues have been rising, which has left investors pleased. Relative to its peers and sector, Netflix has been an average year-to-date performer. WAIT AND SEE what Netflix does this quarter.