Is Time Warner a Hot Stock?

With shares of Time Warner (NYSE:TWX) trading around $83, is TWX an OUTPERFORM, WAIT AND SEE, or STAY AWAY? Let’s analyze the stock with the relevant sections of our CHEAT SHEET investing framework:

21st Century Fox (NASDAQ:FOXA), a film and TV company controlled by Rupert Murdoch, offered to buy Time Warner last month for about $80 billion, a deal that would combine two of the largest players in the cable network business and possibly unleash a wave of consolidation among content producers. Time Warner said in a statement that 21st Century offered about $84 a share, a combination of 1.531 non-voting common stock shares and $32.42 in cash. In a video, Time Warner Chair and CEO Jeff Bewkes said the board determined that the unsolicited bid “was not in the best interests of Time Warner.” 21st Century Fox also confirmed its bid.

Shares of Time Warner soared 17 percent to $83.13 in morning trading Wednesday following an initial report by The New York Times that Murdoch offered the bid for the New York-based company that owns HBO, Turner Broadcasting System and Warner Bros. “The Time Warner Board of Directors declined to pursue our proposal,” said 21st Century in a statement. We are not currently in any discussions with Time Warner.” Rarely do deals of this magnitude fail after the first offer, and the two companies will continue to negotiate given Murdoch’s heavy interest in adding more film and TV assets. But knowing Time Warner has at least one suitor, other network operators could be interested in jumping in to buy all or parts of the media giant. With content production cost surging, TV networks are looking for acquisition deals to boost their bargaining leverage against cable and satellite companies and sports leagues that are seeking higher payments.

Time Warner stock has been moving higher over the past couple of years. The stock is currently trading near all time highs and looks set to continue this path. Analyzing the price trend and its strength can be done using key simple moving averages. What are the key moving averages? The 50-day (pink), 100-day (blue), and 200-day (yellow) simple moving averages. As seen in the daily price chart below, Time Warner is trading above its rising key averages which signal neutral to bullish price action in the near-term. 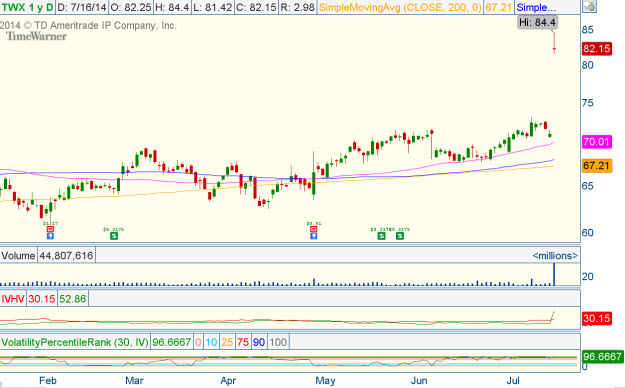 Time Warner has seen increasing earnings and revenue figures over the last four quarters. From these numbers, the markets have been pleased with Time Warner’s recent earnings announcements.

Time Warner has been an average performer, year-to-date.

Time Warner provides media and entertainment through a variety of mediums to consumers and businesses all around the world. The stock has been moving higher and is currently trading near all time highs. Earnings and revenue figures have been increasing over the last four quarters, which has left investors happy. Relative to its strong peers and sector, Time Warner has been an average year-to-date performer. Look for Time Warner to OUTPERFORM.