Is Time Warner Ready to Entertain Your Portfolio?

With shares of Time Warner (NYSE:TWX) trading around $87, is TWX an OUTPERFORM, WAIT AND SEE, or STAY AWAY? Let’s analyze the stock with the relevant sections of our CHEAT SHEET investing framework:

Chief Executive Officer Jeff Bewkes would reap more than $79 million in added payments with any change in control at Time Warner, making him a top beneficiary among shareholders who toughed out a lost decade after 2001’s ill-fated America Online merger. Joining Bewkes are investor Mario Gabelli and clients of Gamco Investors Inc., owners of a $350 million stake. In addition to benefiting from Time Warner’s return from the AOL (NYSE:AOL) mess, it has notched a 23 percent gain since a $75 billion takeover bid by Rupert Murdoch’s 21st Century Fox (NASDAQ:FOXA) became public on July 16. Bewkes, Gabelli and other employees and investors may gain further if Fox eventually wins Time Warner for more than the $85-a-share Murdoch first offered. The company has been a long-term commitment for Gabelli, who owned Warner Communications stock when Steve Ross fought Murdoch 30 years ago. “The company has been doing more or less the right things in terms of growing values, and that’s why we own 4 million shares for clients,” said Gabelli, 72, who has followed Time Warner and its predecessors for more than 40 years. Gabelli once held almost 26 million shares, according to data compiled by Bloomberg.

Time Warner stock has been moving higher over the past couple of years. The stock is currently trading near all time highs and looks poised to continue this path. Analyzing the price trend and its strength can be done using key simple moving averages. What are the key moving averages? The 50-day (pink), 100-day (blue), and 200-day (yellow) simple moving averages. As seen in the daily price chart below, Time Warner is trading above its rising key averages which signal neutral to bullish price action in the near-term. 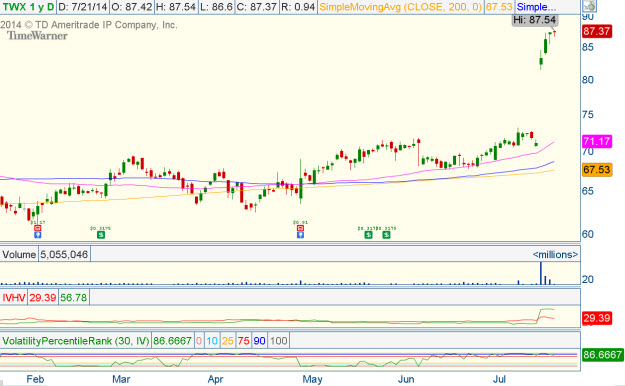 Time Warner has seen increasing earnings and revenue figures over the last four quarters. From these numbers, the markets have been pleased with Time Warner’s recent earnings announcements.

Time Warner has been a relative performance leader, year-to-date.

Time Warner provides media and entertainment through a variety of mediums to consumers and businesses all around the world. The stock has been moving higher and is currently trading near all time highs. Earnings and revenue figures have been increasing over the last four quarters, which has left investors happy. Relative to its strong peers and sector, Time Warner has been a year-to-date performance leader. Look for Time Warner to OUTPERFORM.