Is Zynga Poised to Trade At Yearly Highs After Earnings?

With shares of Zynga (NASDAQ:ZNGA) trading around $3, is ZNGA an OUTPERFORM, WAIT AND SEE, or STAY AWAY? Let’s analyze the stock with the relevant sections of our CHEAT SHEET investing framework:

Zynga is a provider of social game services with 240 million average monthly active users in more than 175 countries. The company develops, markets, and operates online social games as live services played over the Internet and on social networking sites and mobile platforms. Zynga’s games are accessible on Facebook (NASDAQ:FB) and other platforms to players globally, wherever and whenever they want. It operates its games as live services, and they are all free to play. However, it does generate revenue through the in-game sale of virtual goods and advertising.

The biggest mover in the after hours period was Zynga, which saw a jump of nearly 15 percent in its share price after earnings showed that the company had managed to trim losses in the third quarter to just under $70,000, significantly beating most expectations. The company also announced that Clive Downie would become its new COO. Shares have since tempered off and now stand to have posted gains before the opening bell of just over 10 percent.

Zynga stock has remained in a trading rang for most of the last couple of years. The stock is currently trading near the top-end of its range so it may need to spend some time here. Analyzing the price trend and its strength can be done using key simple moving averages. What are the key moving averages? The 50-day (pink), 100-day (blue), and 200-day (yellow) simple moving averages. As seen in the daily price chart below, Zynga is trading above its rising key averages, which signal neutral to bullish price action in the near-term. 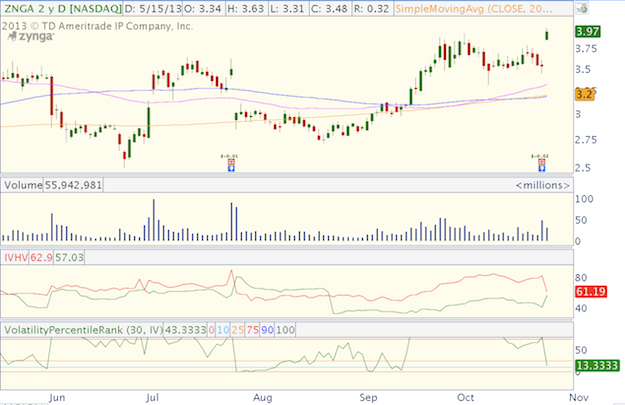 What does this mean? This means that investors or traders are buying a small amount of call and put options contracts as compared to the last 30 and 90 trading days.

Zynga has seen increasing earnings and decreasing revenue figures over the last four quarters. From these numbers, the markets have had conflicting feelings about Zynga’s recent earnings announcements.

* As of this writing

Zynga has been an average relative performer, year-to-date.

Zynga provides a social game experience to consumers all around the world. A recent earnings release has investors really excited about the company. The stock has remained in a range for most of the last couple of years but is now trading near the top-end of this range. Over the last four quarters, earnings have been increasing while revenues have been decreasing, which has produced conflicting feelings among investors. Relative to its peers and sector, Zynga has been an average year-to-date performer. Look for Zynga to OUTPERFORM.