Most Americans Missed the ‘Economic Recovery’

The Great Recession technically ended in the summer of 2009, as gross domestic product rebounded from the bottom and started to expand. However, to many Americans not looking at the textbook definition, the recession never ended. Stagnant wages, high unemployment, and rising expenses are still weighing on consumers. Making matters worse, the rebound in asset prices missed the majority of the country. 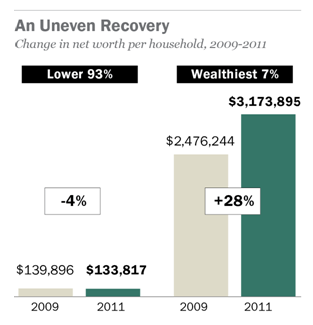 The dividing line between the two sets of households is $836,033. The wide difference is contributed to by the fact that upper households are more likely to hold stocks and bonds, which have rallied a significant amount over the past several years with the help of the Federal Reserve. The less affluent households typically have the majority of their wealth concentrated in their homes.

The 8 million American households in the top 7 percent witnessed their aggregate wealth increase $5.6 trillion from 2009 through 2011. Meanwhile, the bottom 111 million households experienced a $600 billion decline in estimated aggregate net worth. 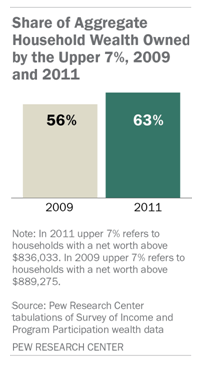 Unsurprisingly, these differences have caused an even greater shift in the share of aggregate household wealth in the country. The upper households grew their share of the wealth pie from 56 percent in 2009 to 63 percent in 2011. On average, these households held 24 times the wealth of those in the less affluent group in 2011, compared to a ratio of 18-to-1 in 2009.

During the period of the study, the S&P 500 increased 34 percent, and continues to rise even higher. On the other hand, the S&P/Case-Schiller home price index declined by 5 percent and remains well below its glory days of the housing bubble. 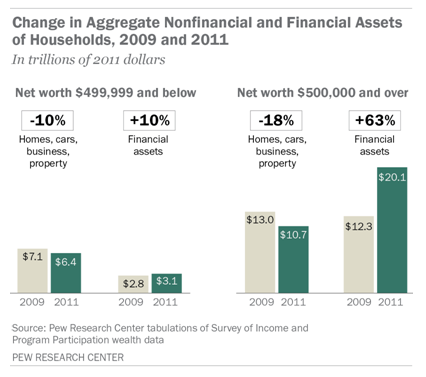