NBA: 4 Reasons Why San Antonio Is Now the Team to Beat

Chris Paul drove right past Danny Green and banked a desperation heave over the outstretched fingertips of Tim Duncan off the glass – to put the L.A. Clippers up 111-109, with one second left on the clock.  At the final buzzer the San Antonio Spurs found themselves at the losing end of an epic, seven-game first-round playoff series. Almost immediately, San Antonio looked outward to rebuild and reload towards yet another championship run.

After years of developing players through the draft, the smallest market in Texas is now the go-to destination for marquee free agents. For next season, the Spurs have suddenly emerged as the team to beat after an offseason where everything broke right. Here’s four reasons why. 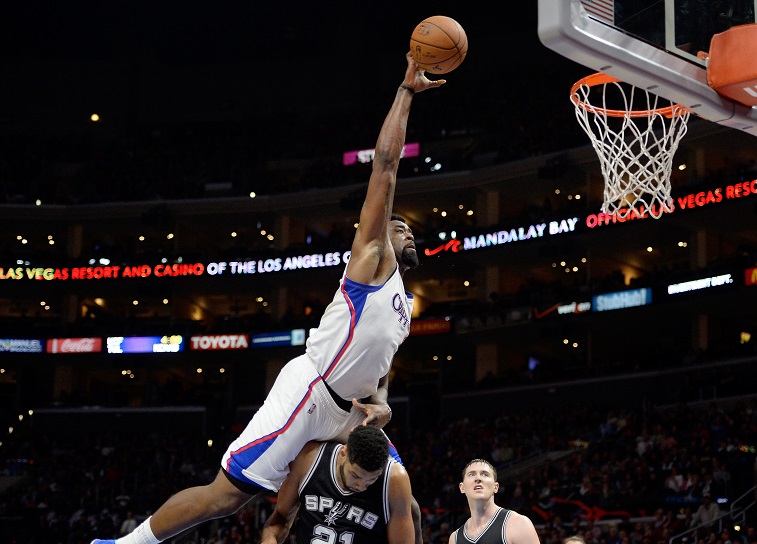 Lob City was a match-up nightmare for the Spurs, and the Clippers were especially dangerous on the pick-and-roll, where DeAndre Jordan would simply camp out at the front of the rim, for easy dunks and put-backs. Some reports had long been circulating that team chemistry was all but a complete wreck, within the L.A. locker roo, and some of these rumors were tacitly confirmed, in practice if not verbally, after DeAndre Jordan agreed to terms with the Dallas Mavericks and left a larger deal from the Clippers to do so.

Mark Cuban, in building his own team, has  cleared a slightly easier path for Dallas’s in-state rival to make a deep run into the West, as a Dallas core featuring Jordan, Chandler Parsons, and an aging Dirk Nowitzki makes for a much easier cover for the Spurs than the recently deconstructed Lob City. Of course, it’s possible that DeAndre Jordan stays in Southern California, so this could not apply at all.

3. The Answer to Small Ball

The high-octane Golden State Warriors revitalized the idea of small ball in the post season, when they routinely played Draymond Green at the 5 and Harrison Barnes at power forward, making relative quick work out of the typically rugged Western Conference before outlasting LeBron James and an injury-ravaged Cleveland lineup to claim the NBA title. The Spurs, of course, never faced off against the Warriors, after themselves being eliminated back in the opening round of the playoffs.

Going small, the Warriors will play the six-foot-seven Draymond Green at center, and surround him with the likes of Stephen Curry, Klay Thompson, Harrison Barnes, and Andre Iguodala. This versatile lineup has given opponents fits, as it features multiple players that can handle the ball in space, hit open cutters, and also knock down shots from behind the arc. If the regular season and playoffs are to be believed, no NBA team exists that can match the GSW basket-for-basket at this frenetic pace.

Rather than going small, San Antonio can simply play its own game with a traditional lineup and punish the Warriors inside, for offensive rebounds and easy scores at the front of the rim. In half court sets, the Spurs can dump the ball down into the post, clear out, and have the likes of Tim Duncan and LaMarcus Aldridge take turns scoring the basketball and forcing the Dubs to rack up  fouls.

LaMarcus Aldridge is locked and loaded, agreeing to terms with the Spurs, after sitting through two separate meetings with the Los Angeles Lakers, one of which left him very much unimpressed by a franchise that was apparently more concerned with the allure of Hollywood than it was about analytics and winning basketball games. At 29, Aldridge has never advanced past the Conference Semifinals and is ready to win now.

For his part, the power forward has averaged more than 23 points and ten rebounds per game through the last two regular seasons, and was at his best in the opening round of the 2014 playoffs, when he dominated the Houston Rockets for 30 points, eleven rebounds, two rebounds, and three blocks. LaMarcus can score the basketball in the low post, pop out to hit mid-range jumpers, and is also a willing passer out of doubles.

Aldridge will fit in seamlessly within a San Antonio motion offense known for its sharp cuts, tough screens, and constant ball movement that will force mismatches out on the floor. For added insurance, David West will back up LaMarcus Aldridge, after signing with the Spurs for the $1.4 million veteran’s minimum.

Tim Duncan is the heart and soul of a San Antonio dynasty that has claimed five championships in fifteen years. Arguably  the greatest power forward of all time, Duncan has racked up 25,974 points, 14,644 rebounds, 4,062 assists, 978 steals, and 2,942 blocks through 18 years of NBA service, and Tt he Big Fundamental has been a tactician on the low block throughout his career.

As a post scorer, Tim Duncan has been known to abuse his opponents, with a series of up-and-under, spin, and drop step moves. When pushed outside, Duncan can even turn-and-face, to either drive the ball towards the front of the rim, or simply rise up to bank in a mid-range jumper off the glass.

At 38, Tim Duncan can still run the floor, and often embarrasses his fellow big men by beating them to the front of the rim in transition. Last April, Duncan more than held his own against Blake Griffin, putting up 18 and 11 over their seven game playoff series. Duncan still has a lot left in the tank, and is set to make one last deep postseason run, before handing the torch over to Kawhi Leonard and LaMarcus Aldridge.