Should You Take a Chance With CBS?

With shares of CBS (NYSE:CBS) trading around $60, is CBS an OUTPERFORM, WAIT AND SEE, or STAY AWAY? Let’s analyze the stock with the relevant sections of our CHEAT SHEET investing framework:

CBS Outdoor is snapping up billboards in New York’s Times Square and Los Angeles’s Sunset Strip as part of a move to capture more of the steadily growing outdoor advertising market. The company, which spun off from broadcaster CBS just four months ago, will pay $690m in cash to Van Wagner for the U.S.’s largest private portfolio of outdoor advertising assets. CBS Outdoor will get 1,100 billboards in 11 top markets, including Las Vegas, San Francisco and Miami, which generated $206m in revenue last year. Privately held Van Wagner will focus on its remaining sports, blimp and aerial units. The deal will help CBS Outdoor, which has about 20 per cent of the U.S. outdoor market, attract more of the deep-pocketed national advertisers who want to put their brands in front of consumers in the biggest cities. Billboards, one of the oldest forms of advertising, are still tracking strong growth in the U.S. as traditional billboards are converted to digital displays and people spend more time out of their homes. “Our audience keeps growing because the mobile connected consumer is spending more time out of the home and we can deliver the eyeballs advertisers want to reach,” said Jeremy Male, CBS Outdoor chief executive. Outdoor advertising spending in the US is projected to grow 3.6 per cent to $7.21bn this year, according to eMarketer. That is faster than the 3.3 per cent growth rate for television ads.

CBS stock has been flying higher over the last several years. However, the stock is currently pulling back and may need time to consolidate. Analyzing the price trend and its strength can be done using key simple moving averages. What are the key moving averages? The 50-day (pink), 100-day (blue), and 200-day (yellow) simple moving averages. As seen in the daily price chart below, CBS is trading between its rising key averages which signal neutral price action in the near-term. 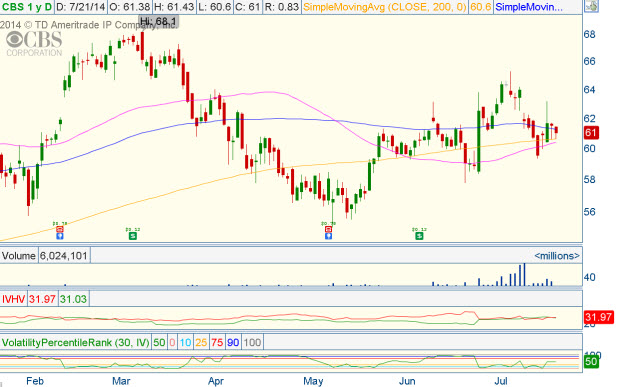 CBS has seen increasing earnings and revenue figures over the last four quarters. From these numbers, the markets have been pleased with CBS’s recent earnings announcements.

CBS has been an average performer, year-to-date.

CBS is one of the largest nationwide providers of entertainment and mass media services. The stock has been flying higher over the last several years, but is currently pulling back. Over the last four quarters, earnings and revenues have been increasing which has left investors pleased. Relative to its peers and sector, CBS has been an average year-to-date performer. WAIT AND SEE what CBS does this quarter.