The Decline of Small Business and What to do About It

Americans have long seen small businesses as the heart and soul of their economy, but small firms have not fared well in recent years. Corporations, in contrast, seem to be on a roll, with profits and stock prices soaring to record highs. Is small business really in decline, and if so, what should we do about it?

One striking indication that small business is falling behind is the divergence between corporate profits and proprietors’ income. The trend is evident in data, shown in the following chart, that were released last week by the U.S. Bureau of Economic Analysis. 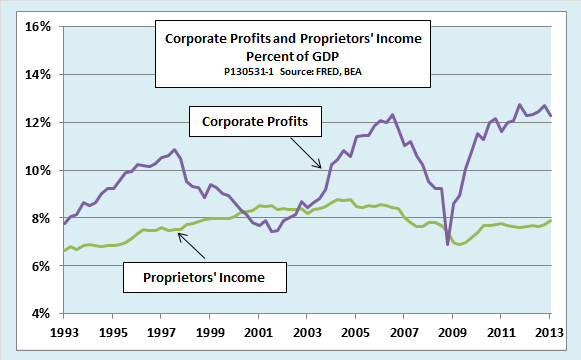 It is true that the two series in the chart correspond only approximately to the popular distinction between big and small business. Proprietors’ income includes the current income of unincorporated businesses that have the legal forms of proprietorships, partnerships, and tax-exempt cooperatives. It does not perfectly match up with small firm size because some small firms are incorporated and some proprietorships, partnerships, and cooperatives are large. Also, proprietors’ income is not, in an economic sense, a pure measure of the profits of small businesses, since it includes the imputed income of small business owners who live off the net proceeds of their enterprises without paying themselves a salary or interest on funds they have loaned to their firms.

Even given these caveats, though, the chart is strongly suggestive. It shows that corporate profits reached an all-time high of 12.74 percent of GDP in the fourth quarter of 2011. Although profits for Q1 2013 were down slightly to 12.30 percent of GDP, that is still higher than they had ever been before their peak of two years ago. Meanwhile, proprietors’ income was up slightly to 7.9 percent of GDP, but it remains well below its all-time high of 8.8 percent in 2004. Before the early 1990′s, the two forms of income rarely differed by as much as two percent of GDP.

At the same time as corporate profits have risen faster than proprietors’ income, large firms have been growing faster than small ones. The next two charts show total employment by firm size over the past twenty years. 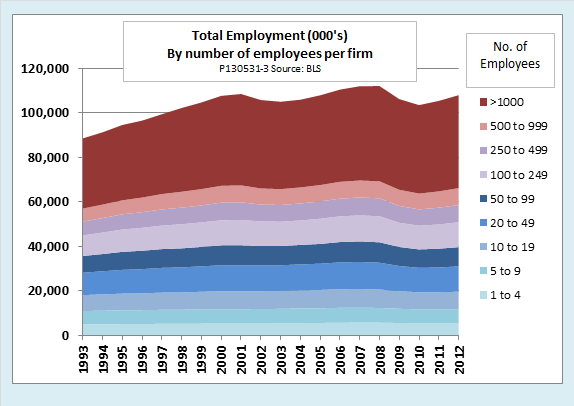 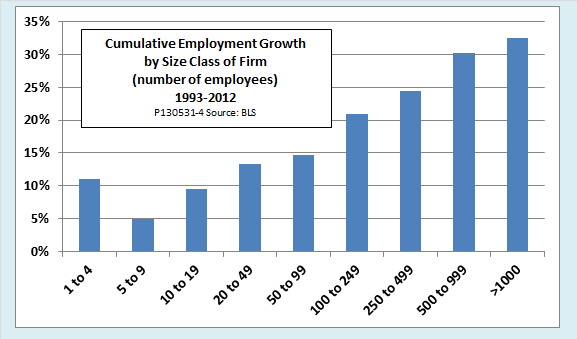 Naturally, if big business accounts for a growing share of employment, we would also expect it to account for a growing share of profits. However, a closer examination of the underlying data shows that the growing employment share of large firms explains only about half of the trend in the ratio of corporate profits to proprietors’ income over the past twenty years. It seems that big businesses are not only growing in size, but are generating more profit per worker as they do so.

So what ails small business?

What exactly is behind the apparent stagnation of small business? One way to find out would be to ask small businesses themselves. That is something the National Federation of Independent Businesses does on a regular basis. The next chart, taken from the latest issue of the NFIB publication Small Business Economic Trends, shows that small business optimism has not fully rebounded from the low point reached in 2008. Four years into the recovery, it remains below its average for the past 30 years. 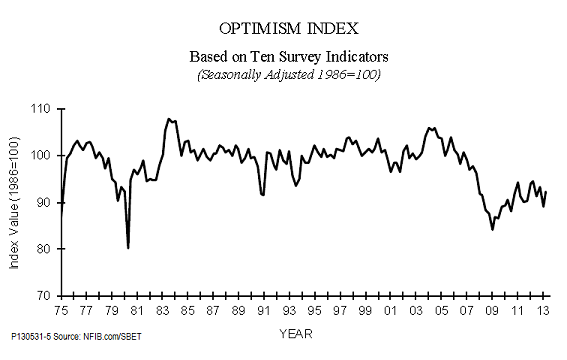 The NFIB also reports what its members see as the single biggest problem facing their firms. Taxes top the list of complaints in the most recent survey, but that is nothing new. In fact, the share of small businesses listing taxes as their top problem has fallen over time, and is a bit lower now than it was late in the George W. Bush administration. Weak demand is another major complaint, but, after topping the list of problems in the depth of the recession, its importance, too, is falling. Competition from big business is still another worry, but only 8 percent of respondents listed it as the biggest problem.

The problem that is increasing most rapidly in perceived importance is regulation and red tape. Some 21 percent of respondents in the latest NFIB survey listed it as the single greatest problem, putting it just behind taxes. Small businesses complain about safety and environmental regulations, as they always have, but the big focus at present is on the possible effects of the Affordable Care Act, which will come into full force next year.

Some commentators, including Martin Neil Baily of the Brookings Institution, maintain that small-business worries about the ACA are out of proportion to the content of the act itself. In recent Congressional testimony, Baily pointed out that there are no requirements on businesses with fifty or fewer employees to provide insurance, nor are they required to pay a penalty if they do not provide it. Furthermore, he testified, 90 percent of small businesses, accounting for 57 percent of employment in the sector, have fewer than 50 employees, while a high fraction of larger establishments are already providing health insurance to their workers.

Other studies (several cited here) suggest that the ACA will help revitalize the small business sector by encouraging startups. The difficulty of getting health insurance in the individual market is a significant deterrent for people who would like to quit their job and undertake something new. Data now show that people are more likely to start their own new business if they have a spouse with a job that provides health insurance. Other data suggest that there is a big jump in start-ups as people become eligible for Medicare.

Still, despite these considerations, small-business owners have legitimate concerns about the ACA. One is that the act gives low-paid employees an incentive to drop out of employer-sponsored health plans and buy subsidized policies on the soon-to-be-created insurance exchanges. That could lead to higher premiums per worker for firms that already offer plans to their employees. Another concern is the fact that the ACA defines full-time workers as those who work 30 hours a week or more. That may induce some small businesses to limit some workers to 29 hours per week, despite the administrative costs of dividing a given number of hours among more employees. A recent New York Times article contends that some of these problems arise from ambiguous or carelessly drafted sections of the ACA of a kind that, in the past, would have been fixed by technical amendments. Today’s polarized Congress, however, seems incapable of making such fixes even when members of both parties agree privately that they should.

What should we do about it?

What are the policy implications of the apparent decline of small business? In my view, the proper approach would be to level the playing field by ensuring that laws affect all firms equally regardless of size or legal form of organization.

The tax system would be a good place to start. For the most part, owners of proprietorships and partnerships are taxed at personal income tax rates on both labor and capital income that they receive from their business activities. So are the owners of small businesses that qualify for Subchapter S corporate status. Taxation of other corporations is more complex and may result in rates that are either higher or lower than those for small businesses.

Typically, corporate income is subject to double taxation, first as corporate profit when it is earned by the firm and then as individual income when owners receive it as dividends or capital gains. However, some corporations, including many of the largest, escape the corporate profits tax in whole or in part by taking advantage of various loopholes. Their owners then benefit further from preferential individual income tax rates on dividends and capital gains. The result is a combined rate for capital income from corporate sources that, even with double taxation, is often below the rate on ordinary income.

As I have frequently argued (most recently in this post), the best way to level the playing field for taxes on businesses of all types would be to abolish the corporate profits tax altogether and tax all capital income at ordinary rates when it is received by owners.

Another reform that would go a long way toward leveling the playing field between large and small businesses would be once and for all to break the link between employment and health insurance. The current system of employer-provided insurance is disadvantageous to small businesses in several ways. First, the tax advantages it provides for health coverage are more easily exploited by large firms than by small ones. Second, employer healthcare coverage is provided at group rates based on the average healthcare costs of a firms’ employees, a system that inherently works better for large than for small groups.

Third, the employer-linked system makes it risky for employees with pre-existing conditions to move from stable jobs at large employers to less certain employment at smaller firms, especially start-ups, even if the jobs would otherwise be more attractive. Fourth, as mentioned earlier, the difficulties of finding affordable coverage in the individual health insurance market discourages corporate employees from leaving to start their own small firms.

Other countries offer a variety of healthcare models that break the link between insurance and employment. These range from single-payer systems to systems that provide guaranteed private coverage under community rating, that is, at a cost based on the average health expenses of the whole community. The ACA does not cleanly follow either of these alternatives. It contains some elements of guaranteed coverage and community rating for people in the market for individual insurance, but at the same time it leaves the old employer-linked system largely intact. The result is likely to be preservation of the existing advantages to large firms while subjecting small firms to new uncertainties and regulatory burdens. There are better ways to provide universal healthcare than the ACA.

Still, even leveling the playing field in areas like taxation and healthcare would not guarantee an end to recent trends that seem to signal a decline of small business. Globalization and technological change may inherently favor larger firms. If so, the trends in profitability and firm size may continue.

If so, how much should we really worry? There seems little risk that small businesses will disappear altogether. They seem safe in the many markets where personal service and knowledge of local circumstances are the keys to success. Also, while technological change and globalization kill off some small firms, they create opportunities for others, whether they are software developers or small farmers catering to the demand for local organic produce.

The bottom line: It probably is not necessary to consider the size distribution of firms per se as a policy objective. Rather, we should change tax, healthcare, and other policies that selectively serve the interests of the corporate sector. At that point we can expect any further change in the balance between large and small firms to be for the better, whichever direction it goes.

Ed Dolan is Wall St. Cheat Sheet’s in-house economics professor. He is the author of an acclaimed series of textbooks Introduction to Economics and Ed Dolan’s Econ Blog.