The Wal-Mart Conundrum: Are Low-Wage Jobs Better Than No Jobs? 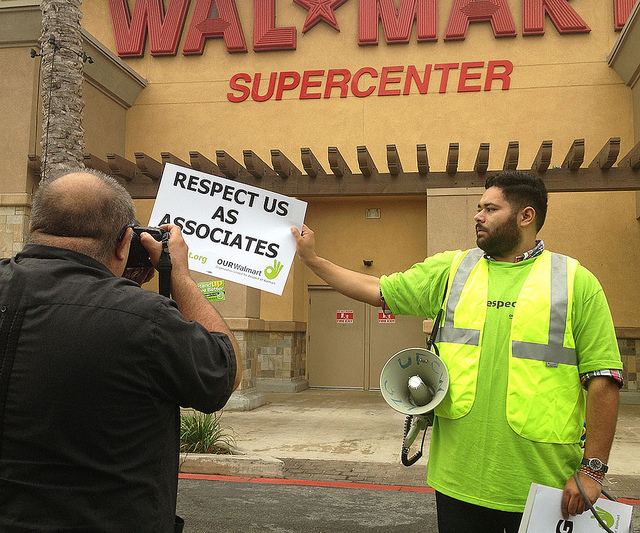 Employing 1.4 million people in the United States, Wal-Mart (NYSE:WMT) is the largest private employer in the nation. With such a massive workforce, its labor practices and poor relationship with unions made the company a go-to example for lawmakers in Washington when they considered the issue of minimum wage this month.

They have made it difficult for the retailer to set up operations in large cities like New York because union-friendly politicians and unions themselves; residents also throw up barriers, which often include demands that the company pay higher minimum wages.

In June, the Washington, D.C., city council approved a bill called the Large Retailer Accountability Act — also known as the living wage law — that requires big box stores, those doing business in spaces with more than 75,000 square feet and more than $1 billion in annual sales, to increase the minimum wage paid to employees there from $8.25 to $12.50 per hour.

The introduction of the minimum wage bill raised concerns for Wal-Mart, which has threatened to cancel some of its six planned stores in the area if the bill is signed into law. “This legislation is arbitrary and discriminatory,” and “it discourages investment in Washington,” Wal-Mart executive Alex Barron wrote in an op-ed published in The Washington Post several weeks ago.

Chicago had its own brief tryst with a living wage bill: in 2006, the city’s lawmakers debated passing a measure that would force big retailers to pay $10 an hour plus benefits. Beale voted in favor of the living wage, but then-Mayor Richard Daley vetoed the bill, paving the way for Wal-Mart’s expansion. Last week, the retailer opened its ninth store in Chicago, where it employs approximately 2,000 workers.

The next store, a Wal-Mart SuperCenter, will open its doors this fall in Chicago’s South Side neighborhood, adding 400 jobs at an $8.75 hourly rate to the community’s economy. For Beale, this is a bittersweet event. “These are not jobs where you can pay a mortgage or raise a family,” he told Bloomberg. “I am a supporter of a living wage. But without Wal-Mart, my site would still be vacant.”

This quandary — which pits politicians’ desires to create jobs with livable wages against the need to attract businesses to their communities and embrace job creation initiatives — is also troubling Washington, D.C., Mayor Vincent Gray. He must decide within the next several days to either sign or veto the Large Retailer Accountability Act.

The city council approved the bill earlier this month by a vote of 8 to 5, with civic, religious, and labor leaders lobbying intensely in favor of the measure. If Gray decides to sign the living wage act, Wal-Mart has pledged to halt at least three urban renewal projects it has started in some of the city’s poorest neighborhoods. Home Depot (NYSE:HD), Target (NYSE:TGT), and Macy’s (NYSE:M) have also said they might forgo expansions if the bill becomes law.

According to statistics compiled by the Urban Institute, more than 140 cities and counties have approved living wage ordinances in the past two decades.

Even though the economy has started its recovery, income inequality has surged. The Dow Jones Industrial Average and the S&P 500 are posting new record highs, but from 2009 — when the Great Recession officially ended — and 2011, 121 percent of income gains went to the richest 1 percent of the population, economists Emmanuel Saez and Thomas Piketty told CBS News.

Comparatively, the remaining 99 percent saw their incomes fall by 0.5 percent during the same period. That reality, plus the economy’s increasing dependence on low-wage jobs, has given added momentum to the idea that all workers should earn enough to pay for basic necessities.

Don’t miss: Was This New Wal-Mart Hiring Policy Created With Obamacare in Mind?

President Barack Obama said the federal minimum wage should increase to $9 from $7.35, but lawmakers have done nothing in that arena, and Congress last voted to raise minimum wage in 2007. The fact that any attempts to raise minimum wage have stalled has given activists even more urgency. As the number of low-wage positions increase due to the structural shift from an industrial to a services-based economy, workers are losing ground. In the years between 2002 and 2012, real median wages dropped by at least 5 percent in five of the top 10 low-wage jobs, including food preparers and housekeepers.

Gray now faces a very difficult choice in deciding whether to give employers like Wal-Mart an ultimatum that could limit job creation in the city.

In Chicago, where the “any and all job creation” mentality won out in 2006, civic leaders are actually unsure if Wal-Mart jobs have been much of a benefit. “I wouldn’t say the city was worse off. But if we were doing a living wage, everybody would be better off,” Booker Vance, pastor of St. Stephen’s Lutheran Church and a veteran of the city’s living wage battle, told Bloomberg. “People are still scraping and scrambling and trying to make ends meet. In that sense we’re not better off.”

As for Wal-Mart, a company spokesman Steven Restivo said that local leaders made a mistake by singling out a single industry in retail. “Local governments should adopt policies that encourage job creation and economic development rather than create arbitrary hurdles that create an unlevel playing field,” he told the publication.