Where Will Chipotle Go Next?

With shares of Chipotle Mexican Grill (NYSE:CMG) trading around $497, is CMG an OUTPERFORM, WAIT AND SEE, or STAY AWAY? Let’s analyze the stock with the relevant sections of our CHEAT SHEET investing framework:

Chipotle Mexican Grill, a company that has worked very hard to project an image of social consciousness and responsibility to its customers, is under fire for excessive executive compensation, The Denver Post reports. The company, which has taken a number of progressive measures such as buying ingredients from local, sustainable or organic sources and giving jobs and English lessons to refugees re-locating from other countries, ironically, pays its typical restaurant employees 800 times less than its two CEOs. A shareholder group has threatened to lobby fellow shareholders to vote no on a “say on pay” measure at Chipotle this year. The group, CtW Investment Group, which works with union pension funds and oversees $250 billion in assets, believes it can potentially lobby 40-50 percent of Chipotle’s shareholders to vote no on the measure, which shareholders will vote on May 15 in Denver, according to The Denver Post. Shareholder outcry over Chipotle executives’ compensation comes as controversy heats up over a California bill that proposes companies that pay their chief executive officers more than 100 times the wages of a typical worker should be subject to higher tax rates, in an effort to reduce income inequality in the state.

“With this legislation, we hope we’re starting a national conversation around this, rather than just hope corporations do the right thing,” said Steve Smith, a spokesperson for the California Labor Federation, which supports the bill. “We see California as being on the forefront of progressive economic legislation,” he added, per a Bloomberg report Tuesday. Should California’s initiative succeed, it would become the first state ever to penalize or reward publicly traded companies based on their compensation practices. Michael Pryce-Jones, a senior governance policy analyst with CtW Investment Group, says that Chipotle, which utilizes a pay-for-performance model to determine its CEOs’ take-home salary, “is becoming a poster child” for the model’s failures. The top five executives at Chipotle took home $67.3 million last year, more than 42 percent what Coca-Cola’s executive team brought in, according to The Denver Post, and Chipotle shareholders are paying more than 10 times the median for CEO duties compared with similar size companies generating similar revenues.

Chipotle Mexican Grill stock has been trending much higher in the last couple of years. The stock is currently moving higher and looks set to continue. Analyzing the price trend and its strength can be done using key simple moving averages. What are the key moving averages? The 50-day (pink), 100-day (blue), and 200-day (yellow) simple moving averages. As seen in the daily price chart below, Chipotle Mexican Grill is trading slightly below its rising key averages which signal neutral to bearish price action in the near-term. 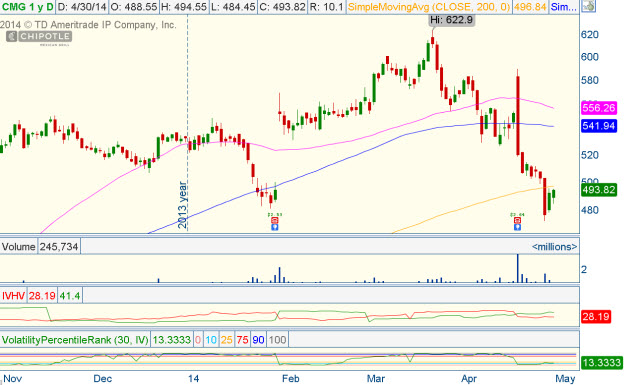 Chipotle Mexican Grill has been an average performer, year-to-date.

Chipotle Mexican Grill provides consumers with quick, delicious, and healthy food options on a daily basis. The company  is under fire for excessive executive compensation. The stock has been trending higher and looks set to continue. Over the last four quarters, earnings and revenues have been on the rise. However, investors have had conflicting feelings about recent earnings announcements. Relative to its peers and sector, Chipotle Mexican Grill has been an average year-to-date performer. WAIT AND SEE what Chipotle Mexican Grill does next.