Where Will JPMorgan Chase Go Next?

With shares of JPMorgan Chase & Co. (NYSE:JPM) trading around $54, is JPM an OUTPERFORM, WAIT AND SEE, or STAY AWAY? Let’s analyze the stock with the relevant sections of our CHEAT SHEET investing framework:

The former head of investment banking in China at JPMorgan Chase has been arrested by Hong Kong’s anticorruption agency, a Chinese news report and a person briefed on the matter said on Wednesday, possibly opening up a significant new front in what has become a global investigation into the Wall Street bank’s hiring practices in China. Fang Fang, 48, has been released but is restricted from leaving Hong Kong after being arrested recently by the city’s Independent Commission Against Corruption, or I.C.A.C., according to a report in Caixin, a respected Chinese-language financial news outlet based in Beijing. The contents of the report were confirmed by a person briefed on the matter. Mr. Fang, who left JPMorgan in March, has been a focus of a federal bribery investigation in the United States into whether the bank’s ‘‘Sons and Daughters’’ hiring program violated the Foreign Corrupt Practices Act, or F.C.P.A. Since last year, the United States authorities have been scrutinizing connections between the bank’s roles in specific deals and its employment of the children of senior Chinese officials and business leaders.

The person briefed on the matter confirmed on Wednesday that Mr. Fang had been arrested and said the contents of the Caixin report were accurate, but declined to be identified because the person was not authorized to speak publicly. It was unclear when Mr. Fang had been arrested or how long he had been detained before being released. When reached on his cellphone on Wednesday, Mr. Fang asked whether the call was to see ‘‘if I’m alive.’’ He added that he could not discuss his situation. The I.C.A.C. and JPMorgan both declined to comment. 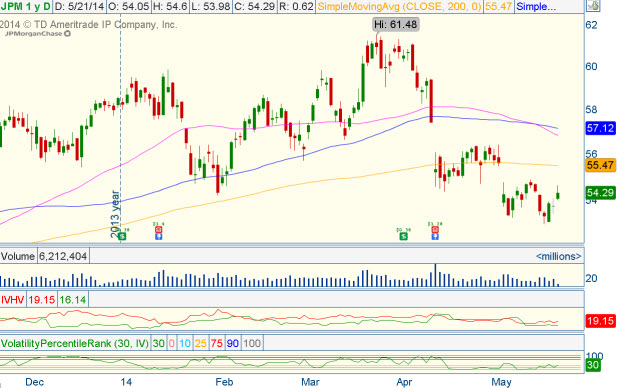 JPMorgan Chase has seen decreasing earnings and revenue figures over the last four quarters. From these numbers, the markets have had conflicting feelings about JPMorgan Chase’s recent earnings announcements.

JPMorgan Chase has been an average performer, year-to-date.

JPMorgan Chase is a bellwether in the banking space that forms an essential part of the United States financial system. The former head of investment banking in China at JPMorgan Chase has been arrested by Hong Kong’s anticorruption agency. The stock has been pulling back in recent times, but is currently moving higher. Over the last four quarters, earnings and revenues have been decreasing, which has produced conflicting feelings among investors. Relative to its peers and sector, JPMorgan Chase has been an average year-to-date performer. WAIT AND SEE what JPMorgan Chase does this quarter.