Will CBS Continue this Bull Run?

With shares of CBS (NYSE:CBS) trading around $51, is CBS an OUTPERFORM, WAIT AND SEE, or STAY AWAY? Let’s analyze the stock with the relevant sections of our CHEAT SHEET investing framework:

CBS operates as a mass media company in the United States and abroad. The company operates in segments that include entertainment, cable networks, publishing, local broadcasting, and outdoor. Consumers seek entertainment of various forms and through an array of platforms at an increasing rate. Through its segments, CBS is able to fulfill consumer needs as it continues to release content that excites the masses. Consumers around the world always seek varied forms of entertainment, and CBS is dedicated to delivering that media, which can only lead to growth and rising profits well into the future.

CBS and Time Warner Cable’s (NYSE:TWC) battle over retransmission fees is now being mediated by the Federal Communications Commission. Three million Time Warner customers have not had access to CBS programming since August 2, as the two companies can’t seem to reach an agreement. The FCC has been reluctant to intervene, but negotiations between the companies have deteriorated to the point that government intervention seems to be the only solution.

CBS stock has been surging higher over the past several years. The stock is currently consolidating slightly below all-time high prices. Analyzing the price trend and its strength can be done using key simple moving averages. What are the key moving averages? The 50-day (pink), 100-day (blue), and 200-day (yellow) simple moving averages. As seen in the daily price chart below, CBS is trading above its rising key averages, which signals neutral to bullish price action in the near term. 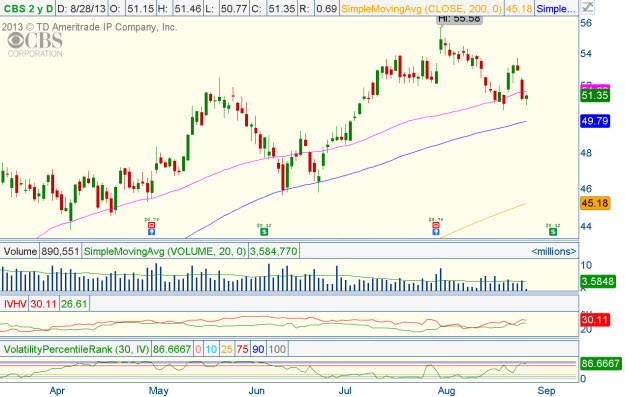 CBS has seen increasing earnings and revenue figures over the past four quarters. From these numbers, the markets have been upbeat about CBS’s recent earnings announcements.

CBS has been a relative performance leader, year to date.

CBS is one of the largest nationwide providers of entertainment and mass media services. The company’s dispute with Time Warner Cable is now being mediated by the FCC because the companies have not been able to reach an agreement. The stock has been soaring and is now consolidating slightly below all-time high prices. Over the past four quarters, earnings and revenues have been rising, which has left investors excited about the company. Relative to its peers and sector, CBS has been a year-to-date performance leader. Look for CBS to OUTPERFORM.