With shares of Coca-Cola (NYSE:KO) trading around $40, is KO an OUTPERFORM, WAIT AND SEE, or STAY AWAY? Let’s analyze the stock with the relevant sections of our CHEAT SHEET investing framework:

The Coca-Cola Company defended itself in the Supreme Court this week over its advertising of a popular juice under Coca-Cola’s Minute Maid brand. Despite its name, Minute Maid’s Pomegranate Blueberry juice is actually made almost entirely of apple and grape juice, but Coke maintains that it sufficiently informs consumers of the juice’s ingredients by placing on the label that it is a “flavored blend of 5 juices.” The New York Times reported Monday that Justice Anthony M. Kennedy had some virulent questions for Coke lawyers regarding the labeling and marketing of Coke’s juices this week, and he stated that if “Coca-Cola stands behind this label as being fair to consumers, then I think you have a very difficult case to make. I think it’s relevant for us to ask whether people are cheated in buying this product.”

According to The New York Times, Pom Wonderful, which sells pomegranate juice, is suing Coke for false advertising, because as lawyer Seth P. Waxman explained, “The evidence shows that over a third of consumers who look at this label believe that pomegranate and blueberry juice, in fact, are the majority juices.” This offends Pom because the company maintains that its products actually contain real pomegranate juice — much more than a teaspoon in a half gallon. Minute Maid’s Pomegranate Blueberry label has pomegranate and blueberries placed in front of an apple and grapes. The juice is also dyed dark purple. However, as The New York Times highlights, the beverage contains only 0.3 percent pomegranate juice and 0.2 percent blueberry juice, and that’s where Pom, along with other Supreme Court justices, see a problem. Kathleen M. Sullivan, a lawyer for Coca-Cola, defended the company’s labeling by asserting that, “We don’t think that consumers are quite as unintelligent as Pom must think they are. They know when something is a flavored blend of five juices and the non predominant juices are just a flavor.” However, Justice Kennedy fired back and said, “Don’t make me feel bad, because I thought that this was pomegranate juice.”

Coca-Cola stock has made positive progress over the past several years. The stock is currently trading near all time highs and looks poised to continue. Analyzing the price trend and its strength can be done using key simple moving averages. What are the key moving averages? The 50-day (pink), 100-day (blue), and 200-day (yellow) simple moving averages. As seen in the daily price chart below, Coca-Cola is trading above its rising key averages which signal neutral to bullish price action in the near-term. 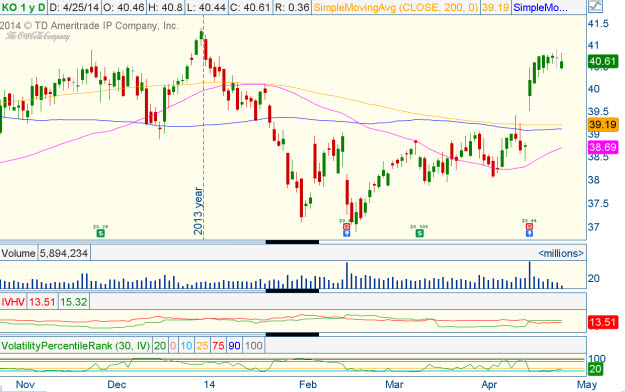 Coca-Cola has seen decreasing earnings and revenue figures over the last four quarters. From these numbers, the markets have had conflicting feelings about Coca-Cola’s recent earnings announcements.

Coca-Cola has been an average performer, year-to-date.

Coca-Cola is an iconic company that provides beverage products through its recognized brands to consumers and companies in just about every country worldwide. The company defended itself in the Supreme Court this week over its advertising of a popular juice under Coca-Cola’s Minute Maid brand. The stock has moved higher over the past several years and is currently trading near all time highs. Over the last four quarters, earnings and revenues have been decreasing, which has produced conflicting feelings among investors. Relative to its peers and sector, Coca-Cola has been an average year-to-date performer. WAIT AND SEE what Coca-Cola does this quarter.