With shares of JPMorgan Chase & Co. (NYSE:JPM) trading around $56, is JPM an OUTPERFORM, WAIT AND SEE, or STAY AWAY? Let’s analyze the stock with the relevant sections of our CHEAT SHEET investing framework:

JPMorgan Chase CEO Jamie Dimon, a feisty leader who steered the banking company through the perils of the Great Recession, is battling throat cancer. The condition is considered to be curable, according to a memo to JPMorgan Chase employees and shareholders that Dimon released late Tuesday. Dimon, 58, said he plans to remain on the job and be actively involved in key decisions while undergoing radiation and chemotherapy treatment. The eight-week treatment will begin soon at Memorial Sloan Kettering Hospital in New York. The cancer remains confined to Dimon’s throat and adjacent lymph nodes on the right side of his neck, according to the memo. “I feel very good now and will let all of you know if my health situation changes,” Dimon said.

Despite the words of reassurance, Dimon’s illness could raise leadership concerns at one of the world’s biggest banks. Those worries could be magnified by a recent succession of departures among high-ranking JPMorgan Chase executives once considered to be Dimon’s potential successor. The list of defections have included former co-chief operating officer Frank Bisignano and former investment banking head Michael Cavanagh, who had been known as Dimon’s “Mr. Fix-it.” Dimon, JPMorgan’s CEO for the past eight-and-half years, won praise for his savvy in the aftermath of the mortgage-market meltdown that nearly toppled the banking industry before miring the U.S. in its deepest recession since World War II. His reputation, though, was tarnished in 2012 by the revelation of a stunning $6 billion loss triggered by risky bets made on complex debt securities by a JPMorgan trader in London.

The setback, known as JPMorgan’s “London Whale,” contributed to an unsuccessful shareholder campaign last year to separate the jobs of chairman and CEO — duties that Dimon still holds. JPMorgan also reached a settlement with the U.S. Justice Department last year that required the bank to pay $13 billion to cover losses from the sale of toxic mortgages that later collapsed in value. Another legal settlement negotiated last year required JPMorgan to dole out $4.5 billion to investors in bundles of shoddy home loans. JPMorgan said most of those troublesome mortgages were inherited from investment bank Bear Stearns and savings and loan Washington Mutual, companies that Dimon negotiated to buy during the financial crisis of 2008.

JPMorgan Chase stock has struggled to make significant progress. The stock is currently pulling back and may need time to stabilize before heading higher. Analyzing the price trend and its strength can be done using key simple moving averages. What are the key moving averages? The 50-day (pink), 100-day (blue), and 200-day (yellow) simple moving averages. As seen in the daily price chart below, JPMorgan Chase is trading above its rising key averages which signal neutral to bullish price action in the near-term. 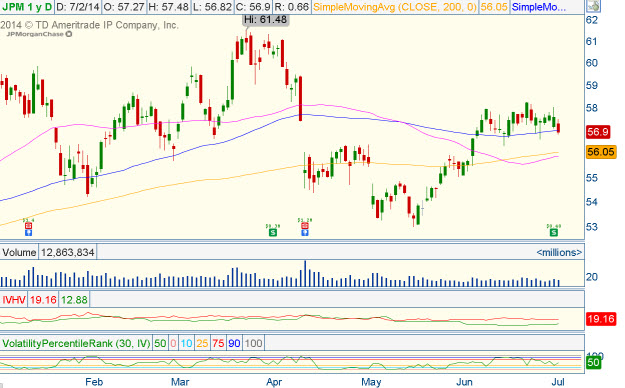 JPMorgan Chase has seen decreasing earnings and revenue figures over the last four quarters. From these numbers, the markets have had mixed feelings about JPMorgan Chase’s recent earnings announcements.

JPMorgan Chase has been an average performer, year-to-date.

JPMorgan Chase is a bellwether in the banking space that forms an essential part of the United States financial system. The company CEO Jamie Dimon is battling throat cancer. The stock has struggled to make significant progress and is currently pulling back. Over the last four quarters, earnings and revenues have been decreasing, which has produced mixed feelings among investors. Relative to its peers and sector, JPMorgan Chase has been an average year-to-date performer. WAIT AND SEE what JPMorgan Chase does this quarter.