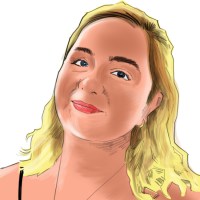 Alani Vargas began her career as a journalist in 2017, and joined the Showbiz Cheat Sheet team in 2019. She specializes in writing about The Bachelor, Marvel, and Star Wars. If our team needs to know some obscure fact about the Star Wars prequel era, The Clone Wars, or Ahsoka Tano, Alani is the person we ask. She studied at Northwestern University’s Medill School of Journalism.

Alani’s career highlights so far include attending the 2018 Grammys as a journalist, attending the Jedi: Fallen Order preview event in 2019, and interviewing celebrities including Kellan Lutz, Ashley Tisdale, and Ashley Eckstein. She also co-directed a short documentary that premiered at the American Documentary Film Festival in 2019.

Alani is inspired in her work by seeing more representation within television, especially when it comes to depicting queer and Latinx experiences. In her spare time, she watches Love Island to perfect her British accent (this is only slightly a joke), and knits with the goal to recreate Harry Styles’ JW Anderson cardigan. She also paints occasionally.

See more from Alani on the A.V. Club, Bustle, Remezcla, Muck Rack, and her personal portfolio.

Which Studios Produce ‘Star Wars Visions’ Episodes? Each 1 Is a Different Anime Studio

Netflix ‘Britney vs Spears’ Won’t Cross a Line ‘Framing Britney Spears’ Did, Along With Other Major Differences

‘The Mandalorian’: While Ahsoka Tano and Luke Skywalker’s Decisions Were so Different, They Make Sense Within ‘Star Wars’ Canon

How Many Episodes Will Vera Farmiga Be in ‘Hawkeye’? Her Comic Book Twist Could Give a Hint

Fans Think Florence Pugh Was Going to Have a Cameo on ‘Ted Lasso,’ but It Got Cut (Although They Can’t Imagine Why)

Before ‘WandaVision’ and ‘The Boys’ This Year, Have Superhero Shows Been Nominated for Emmys in the Past?

How Many Episodes of ‘Hawkeye’ Will Yelena Belova Be In? Florence Pugh’s IMDb (Kinda) Gives a Hint

Joe and Love’s Baby Name on Netflix’s ‘You’ Holds a ‘Gossip Girl’ Connection (No, It’s Not Penn Badgley)

Where Is Spider-Man in ‘Hawkeye’? The Show Takes Place in New York City, but Peter Park Isn’t Working With Kate Bishop

All of ‘Star Wars: Visions’ Might Not Be Canon and Connected to the Current Timeline, but Some Stories Are

What The New ‘Harley Quinn’ Comic Series Gets Right About Harley and Poison Ivy’s Relationship and Why It’s Needed, According to Writer

‘You’: Forty Possibly Hinted That Love Quinn Was Hiding Another Major Secret Fans Could See in Season 3

How a ‘Rogue One: A Star Wars Story’ Editor’s Voice Ended up in the Film; INTERVIEW With Kevin Hickman

‘Cruel Summer’: It Sounds Like There’s a Bike Switch-up in the Christmas Scene, Which Might Bring a Big Theory to Life in the Finale

‘Cruel Summer’: The Most Honest Relationship in the Show, According to Olivia Holt, Might Shock You

‘Cruel Summer’: This 1 Moment Is ‘Going to Really Change Everything’ in the Finale, According to Olivia Holt

‘Cruel Summer’: Is Mallory In Love With Kate? The Official Twitter Shared an Interesting Parallel

‘Cruel Summer’: 5 Theories That Will Make Fans the Angriest if They Happen in the Finale

‘Cruel Summer’: Mallory Changed Kate’s Outlook in This 1 Way, According to Olivia Holt

7 DC Comic Female Characters in the LGBTQ Community, From TV, Movies, and Comics

Is Harley Quinn Stronger Than Joker?

mxmtoon on the Importance of Her Part in ‘Life is Strange: True Colors’ as Singing Voice of Alex Chen

mxmtoon Talks Menstrual Stigma, Her PMDD, and How She Checks up on Herself While Songwriting

Kacey Musgraves and Selena Quintanilla Did 1 Similar Thing With Their Music, The Country Singer Said