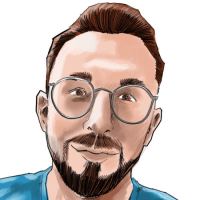 Joshua Lezmi is a self-described Broadway geek who loves a good mini-series and also has intense opinions about TV’s widespread transition to the anthology format. He began covering entertainment news in 2018 and joined the Showbiz Cheat Sheet team in 2019. He’s an expert in the Marvel Cinematic Universe, Netflix originals, and trending TV shows. He loves interacting with the fandom that surrounds certain movies and TV shows, as theorizing and engaging with like-minded fans is both a creative outlet and an interactive experience.

In his spare time, Joshua hones his craft by participating with Shut Up & Write! He is Google Analytics certified and earned his Bachelor’s degree in English: Language, Media, and Communications from the University of Rochester. While there, he was formally trained in speechwriting and performance by Curt Smith, the speechwriter for George H.W. Bush.

George Clooney on ‘Being a Liberal’

Why Scarlett Johansson Said She Was ‘Always Terrible At Commercials’

Robert Downey Jr. on Acting: It Can ‘Keep You Young Forever, or It Can Make You Old Before Your Time’

Brad Pitt Asked Anthony Hopkins Why Painting Is ‘Meaningful’ to Him

Rihanna Told Sarah Paulson What Keeps Her ‘Alive and Passionate’

‘WandaVision’: What Elizabeth Olsen Is ‘Most Grateful About’

‘TFATWS’ Star Sebastian Stan on What Draws Him to a Role

What’s Next for Anthony Mackie Following ‘The Falcon and the Winter Soldier?’

Sebastian Stan on Why Sam Wilson’s Name Deserves to Come First in the Show Title, ‘The Falcon and the Winter Soldier’

What Has Wyatt Russell Been in Outside ‘The Falcon and the Winter Soldier?’

‘The Nanny’: Famous Guest Stars Who Appeared on the Sitcom

‘The Simpsons’ & the Other Longest-Running Scripted Primetime Shows Ever

Sebastian Stan on ‘Gossip Girl’ and His Friendship With Chace Crawford

‘The Nanny’ Broadway Musical: Everything We Know So Far

What Else Is Daniel Davis Known For Outside His Turn as Niles in ‘The Nanny?’

Meryl Streep, Katharine Hepburn, and Other A-Listers With the Most Oscar Nominations for Acting

What Happened to Lauren Lane (C.C. Babcock) From ‘The Nanny?’

What Has ‘The Nanny’ Star Charles Shaughnessy Been Up to Since the ’90s Sitcom Ended?

Where Is the Cast of ‘Married…with Children’ Today?

What Else Has ‘The Nanny’ Star Fran Drescher Been In?

Where Is the Cast of ‘The Nanny’ Today?

7 of the Most Famous People Who Frequented Studio 54

The 5 Best Sitcoms Available on Netflix

Charles Shaughnessy Said ‘The Nanny’ Had a ‘Perfect Pilot’

‘The Nanny’: Charles Shaughnessy Said ‘Franny Was Such a Force of Nature’ and Talked Cast Chemistry

Do Critics Prefer ‘WandaVision’ or ‘The Falcon and the Winter Soldier?’