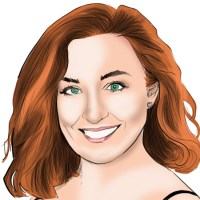 Kelli Boyle has covered the entertainment industry since 2017, and joined Showbiz Cheat Sheet in 2020. Her passion for film and Hollywood history drives much of her work here, which focuses on classic actors including Carrie Fisher, Debbie Reynolds, Eddie Fisher, and Elizabeth Taylor. She also writes about present-day celebrity relationships, original TV on streaming services including Bridgerton and WandaVision, and the British royal family. Kelli earned her Bachelor’s in Journalism from The Pennsylvania State University.

Kelli has a unique symbiosis between her writing and her work as an actor: She watches TV and movies to analyze the acting performances and learn from them. She also enjoys watching TV shows while reading the script (pro tip: a lot of pilot scripts are easily found online) to see what the original idea was for the episode, and what ended up on the screen.

Kelli has spent time providing avenues for other journalists to thrive as well. As part of her former work at Elite Daily, she created and ran an internship program, which has launched several college interns into successful media careers. She’s also a proud member of the LGBTQ+ community, which means the world to her.

How ‘Encanto’ Is Different From Most Disney Animated Films, According to Lin-Manuel Miranda

‘Being the Ricardos’: Lucie Arnaz Wanted Nicole Kidman and Javier Bardem to Play Her Parents

‘Twilight’: Kristen Stewart Says Robert Pattinson’s ‘I Don’t Give a F*ck’ Attitude Is Exactly What the Movie Needed

‘Being the Ricardos’: The ‘I Love Lucy’ Scene Nicole Kidman Was ‘Obsessed’ With Getting Right

‘Being the Ricardos’: Nicole Kidman Had ‘Massive Trepidation’ the Last Month Before Playing Lucille Ball

‘Outlander’ Season 6: Caitriona Balfe Reveals How They Hid Her Pregnancy While Filming

Is ‘Tick, Tick…Boom!’ About ‘Rent’? No, but Lin-Manuel Miranda’s Film Is Basically a Prequel

‘Enchanted’ Is Now on Disney+: Amy Adams and Patrick Dempsey Give ‘Disenchanted’ Updates

‘Tick, Tick…BOOM!’: Alexandra Shipp Was so ‘Embarrassed’ by Her Audition, She Wouldn’t Let Her Mom Watch

‘Wicked’ Movie: This Video of Idina Menzel and Cynthia Erivo Singing Together Will Give You Chills

‘Spencer’ Movie: Anne Boleyn’s Ghost Is a Character — How She’s Relevant to the Story

‘Wicked’ Movie: Jon M. Chu Has Dreamed of Directing the Film Adaptation Since 2003

How ‘Belfast’ Inspired Caitriona Balfe to ‘Go for It’ With Motherhood

Will There Be an ‘Outlander’ Season 8? Caitriona Balfe Weighs In

The ‘Dune’ Cast Member Everyone Was Afraid to Work With

‘Dune’ Cast 2021: Rebecca Ferguson Was ‘Very Nervous’ To Work With This Actor: ‘I Was Having Heart Palpitations’

‘Dune’: Rebecca Ferguson Could Quit Acting Happily, But Not Before Crossing This Off Her Bucket List

When Steven Spielberg’s ‘West Side Story’ Could Be on Disney+

How ‘Dune’ Created ‘the Voice’ Scenes Without Help of CGI

‘Percy Jackson’ TV Series Pilot Has a Director, Rick Riordan Says: Everything You Need to Know About Them