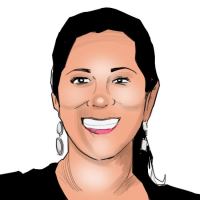 Lou Haviland joined the Showbiz Cheat Sheet team in 2019. Much of her focus is on classic TV, including The Andy Griffith Show, All in the Family, The Jeffersons, and Matlock. She also covers Jeopardy! and the Nat Geo Wild reality series The Incredible Dr. Pol.

Much of her coverage stems from the personal enjoyment she’s drawn from watching the shows herself, and she loves finding cast members’ accounts from their experiences on the shows to share with readers and fellow fans.

Lou earned her bachelor’s in communication arts from Ramapo College of New Jersey. When she’s not going behind the scenes in Mayberry, you can expect her to be in the books or blogs of Jhumpa Lahiri, David Sedaris, or MC Beaton. See more from Lou on her Muck Rack profile.

‘The Incredible Dr. Pol’: How Dr. Jan Pol Learned to Be a ‘Hands-On Veterinarian, an Old-Style Vet’

‘The Andy Griffith Show’ Was Regularly Snubbed by the Emmys

Alex Guarnaschelli’s Pumpkin Pasta Because Fall Is in the Air

‘Jeopardy!’ Now Has a Hall of Fame and Here Are Its Legendary Inaugural Inductees

‘The Andy Griffith Show’: Don Knotts was Constantly Exhausted on the Comedy’s Set

‘Jeopardy!’ Will Unveil Its ‘Second-Chance’ Tournament This Fall

‘Inside Jeopardy!’: The Iconic Quiz Show’s New Podcast Promises to Take Superfans Behind the Scenes

Aarti Sequeira’s Indian Omelet: ‘It’s the Kind of Thing I Whip up at Almost Any Hour of the Day’

Alton Brown on What to ‘Beware’ of When Buying Mushrooms, Plus the Right Way to Clean the Meaty Veggies

It’s Time for ‘Jeopardy!’ Fans to Let Go of the Alex Trebek Dream

Alton Brown on Why Food Network Can’t Succeed with a Healthy Cooking Show: ‘No One Will Watch It’

Giada De Laurentiis Reveals How to ‘Get Creative’ with Pasta Leftovers

‘Jeopardy!’ to Name ‘Multiple’ Hosts, According to EP