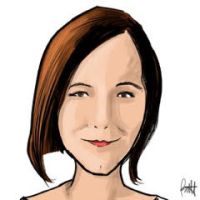 Megan Elliott covers TV and celebrity news, with a focus on reality TV and historical and period TV shows. Her expertise includes When Calls the Heart, Bridgerton, Outlander, and Poldark (RIP). She is a member of the Los Angeles Chapter of the Society of Professional Journalists and has her M.A. in Media Studies from The New School. She loves classic Hollywood movies, Twin Peaks, and ’90s indie rock.

Megan is a trivia buff and tested her knowledge as a contestant on Jeopardy! She’s also an occasional book reviewer; you can find her reviews on Bookreporter and Kirkus Reviews. One such review earned her second place in the Nondaily Reporting and Writing, Review/Criticism category from the San Diego Society of Professional Journalists. She’s inspired by the works of Joan Didion, Megan Abbott, Jane Austen, and George Saunders.

Megan began as a journalist with Endgame360 in 2015 and has focused on coverage for Showbiz Cheat Sheet since 2018. Find more of her work on Muck Rack.

‘The Equalizer’ Season 3 Premiere Date, What to Expect, and How to Watch

‘Jack Ryan’ Season 3 Finally Gets Release Date: Everything We Know So Far

‘Sister Wives’: Despite Everything, Christine Doesn’t Consider Her Marriage to Kody a Failure

‘The Rookie: Feds’: Premiere Date and Everything Else to Know About ‘The Rookie’ Spinoff With Niecy Nash-Betts

‘Married at First Sight’: 5 of the Worst Husbands of All Time

‘Bridgerton’: Marina’s Storyline Could Take a Very Dark Turn in a Future Season

‘Married at First Sight’: Alexis Has Checked Out of Her Marriage to Justin

Scott Bakula Addresses ‘Quantum Leap’ Rumors, Says He Has ‘No Connection’ to the Reboot

These Hallmark Movies Are Based on Books

‘Sister Wives’: Kody Brown Plays the Victim in Teaser for Next Episode

‘Seeking Sister Wife’ Season 1 Cast: Where Are They Now?

‘Married at First Sight’: 10 Shows to Watch If You Love the Lifetime Series

These Hallmark Channel Stars Are Couples in Real Life

‘Bosch’ Author Michael Connelly Has Another TV Series in the Works

‘Doubling Down With the Derricos’: GG Celebrates Her Birthday as Deon Derrico Says He Hopes Family Will Return to TLC ‘Soon’

‘Married at First Sight’ Season 15 Spoilers: One Couple May Not Make It to Decision Day