4 Ways Women of the Royal Family Have Hidden Their Pregnancies

Pregnancies are wonderful and joyous, but they can also be emotional and complicated which means that privacy is paramount. The first three months of pregnancy can be filled with uncertainty, which is typically why most women wait until the start of their second trimester to begin letting their friends and family know that they’re expecting. However, if you’re a member of the royal family and you’re constantly in the public eye, hiding the changes in your body can be quite challenging.

Meghan Markle, Duchess of Sussex, announced that she and Prince Harry are expecting their first child in the Spring of 2019. Though they announced their good news on Oct. 15, 2018, it looks like Markle is already well into her second trimester. After all, Markle had a successful 12-week scan just before the news was made public. Since Markle hasn’t exactly been hiding away in the past few months, we looked at all of the ways, she and the rest of the ladies of the royal family have hidden their pregnancies. 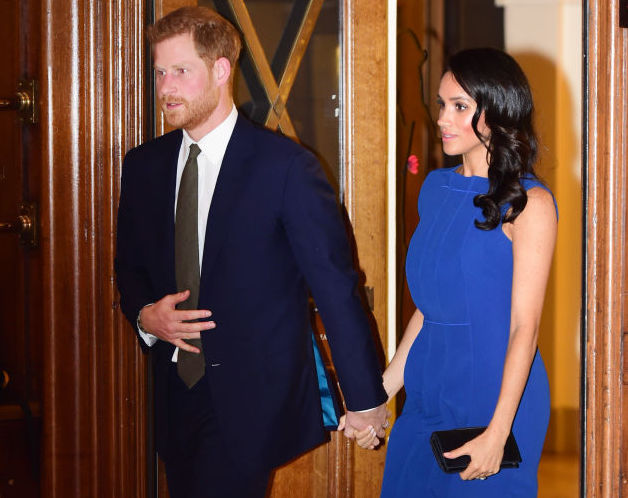 Distracting the press and giving everyone something else to talk about is a major tactic that Markle used to hide her growing bump. When she and Prince Harry attended a showing of Hamilton on Aug. 29, Markle chose to show off her gorgeous legs in a short dress.

Markle typically wears her hair in a low bun, but more recently she’d be allowing her brunette tresses flow freely. She wanted to make sure that our attention was not on her tummy.

As soon as the weather turned, Markle was in fall mode. While Prince Harry seemed to get away with a light jacket in September, Markle was already draping herself in long coats. While attending an event with her mum, Doria Ragland and her husband, Markle wore a gorgeous long, cobalt blue coat.

"To the women of the Hubb Community Kitchen, thank you so much for allowing me to be part of this adventure with you. I am so privileged to know you. I'm so excited to see the projects you're going to continue to do in your own community, the community at large, and also how you're going to inspire people globally by sharing your stories and your recipes." — The Duchess of Sussex with the women of the Hubb Community Kitchen, as they celebrate the launch of ‘Together: Our Community Cookbook’. #CookTogether.

She also pulled out a flouncy peplum top a few days later. Markle was probably taking cues from her sister-in-law, Duchess Kate Middleton. The Duchess of Cambridge has had to hide three pregnancies and she’s used everything from coats to large purses as distractions. She’s also been famous for getting a haircut before announcing her pregnancies, which draws attention to her head instead of her midsection.

Though Markle hasn’t worn a ton of loud patterns to hide her bump, Middleton and Markle’s late mother-in-law Princess Diana, both used busy and loud patterns to conceal their growing bellies. Colorful patterns distract from any changes in a woman’s silhouette

If Markle has another child in the future, she may have to consider upping her pattern game. After all, with each pregnancy, women tend to show faster.

All summer, Markle’s schedule has been packed, and she’s barely slowed down even when she embarked on her first official royal tour with Prince Harry. Unlike, Duchess Kate Middleton, Markle didn’t suffer any terrible morning sickness that literally madder her go MIA. Middleton suffered from hyperemesis gravidarum during her pregnancies, which is exceptionally debilitating morning sickness. However, Kensington Palace has announced that they will be pulling back on her schedule just a tad.

A royal insider revealed to ABC News, “She’s feeling fine but resting. We have to make sure she is well-paced and not overdoing it. She wants to do everything, but Prince Harry is encouraging her to pace herself. If it has been a very late night due to unforeseen circumstances, we have to adjust for that.”

We won’t be surprised if we start seeing a lot less of Markle in the coming months.