On the NBC comedy Cheers, everybody knows your name, but specifically they know Norm (George Wendt)’s name. A running joke is that every time regular patron Norm Peterson enters Cheers, the entire bar calls, “Norm!” With 11 seasons playing Norm, one might expect fans to conflate George and Norm, but Wendt says it’s not a problem.

Wendt was a guest on the Going Long with Bruce Murray podcast on March 4, 2021 to talk about sports. While answering some Cheers questions, Wendt said fans know the difference between Norm and George, though he has met some famous Norms himself.

The legacy of Norm Peterson on ‘Cheers’

In addition to the name check, Cheers had a running joke where every time Norm arrived, someone behind the bar would ask him a question. Norm had a new one liner for every entrance. Co-creator and director James Burrows said the writers struggled to come up with new Norm jokes every week.

Cheers writers Ken Levine and Isaacs once devised a “monster” Norm joke. Norm was parked at a meter so he had to leave and return every hour to feed the meter. This meant the entire episode was full of Norm entrances, paying off when Frasier (Kelsey Grammer)’s baby even joined in with, “Norm!”

For his part, Wendt said he never wanted to be the focus of Cheers episodes. Wendt preferred to be part of the whole ensemble.

One of Murray’s big questions was whether Cheers fans ever called Wendt Norm by mistake. It’s a reasonable question, and they do say “Norm” but not because they don’t know his real name.

“I don’t think anyone thinks it’s my actual name but it’s an easy mistake,” Wendt said on Going Long. “It doesn’t really happen as often. Somebody might blurt it out before they think but it’s not that often, especially now. I look a lot different.”

Wendt himself met a famous Norm and did a double take. He set the scene when he first arrived in L.A. for Cheers. 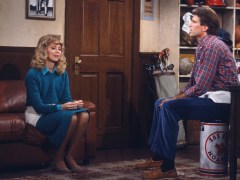 ‘Cheers’: Ted Danson Once Said He Didn’t Really Get Sam Malone Until Season 3 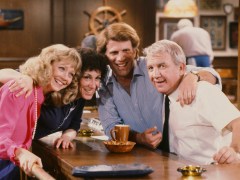 ‘Cheers’ Added a Disclaimer After Viewers at Home Complained 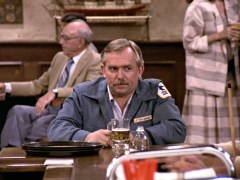 When we first moved to LA I found a neighborhood park that had a nice court and some games going on in the afternoon. So I would go over there once or twice a week and I was always the fat guy, and never really picked when the games started. So at one point there was more than 10 people there. So it was me and this distinguished looking older gent, African-American, salt and pepper beard, salt and pepper hair, looked to be about 5 years older than me, 10 years older than me. We were left sitting on the bench. I guess we would’ve been next and they didn’t pick him, and they didn’t pick me. Him probably because he was old and me because I was fat.

Wendt didn’t get to play basketball that day but he made a new friend in a Chicago Bulls legend.