‘Chicago Med’ Cast: Who Is the Most Famous Actor on the Show?

The Windy City’s busiest medical squad rescues lives while navigating complex interpersonal relationships on Chicago Med. Since its debut on November 17, 2015, viewers have thrilled to the social and romantic adventures of doctors Reese, Latham, Choi, Manning, and Charles. Some of the actors’ names you know. Others may be less recognizable. Who is the most famous actor on Chicago Med? The answer may surprise you.

A quick look at the Chicago Med cast

Collin Donnell has appeared in every episode of Chicago Med so far, and all indications say the trend is sure to continue. Hailing from the Midwest, Donnell began acting, singing, and juggling while still in high school. Upon graduation, he attended Indiana University, where he received the Outstanding Senior Project Award in 2005. The man is talented for sure, but he’s not the most famous thespian at Gaffney Chicago Medical Center.

Born and raised in Harlem, Yaya DaCosta brings sultry good looks and exceptional acting ability to the part of April Sexton on Chicago Med. The African-American actress made her Off-Broadway debut in The First Breeze of Summer at the Signature Theater, for which she earned rave reviews as well as the Vivian Robinson Award for Excellence in Black Theater. You may have seen DaCosta on the silver screen in The Kids are All Right and Honeydripper, but she’s still not the most famous cast member on Chicago Med.

Playing doctors (and nurses) on TV

Will Halstead, portrayed by Cleveland native Nick Gehlfuss, is one of the most exciting -and perplexing- characters on Chicago Med. In last season’s cliffhanger, ‘Death Do Us Part,’ Will was forced into a witness protection program the same day he was set to marry co-worker, Natalie.

Played by Torrey DeVitto, Natalie Manning’s character has certainly seen more than her fair share of ups and downs. Good thing her personal life is happier than that. In addition to portraying the part of a comely nurse stranded at the altar in her wedding gown, DeVitto is real-life hospice volunteer as well as an accomplished violinist who appeared on Fleetwood Mac alumnus Stevie Nicks’ 2011 CD release, In Your Dreams.

Talented actress Norma Kuhling played the part of Dr. Ava Bekker on several episodes of Chicago Med but may be one of the least-known actors to appear on the NBC medical series. Classically trained at the London Academy of Music and Dramatic Art, Kuhling’s only other feature part was in the 2001 adventure-thrill flick, Fallen.

Have you figured out who’s the most famous actor on Chicago Med? 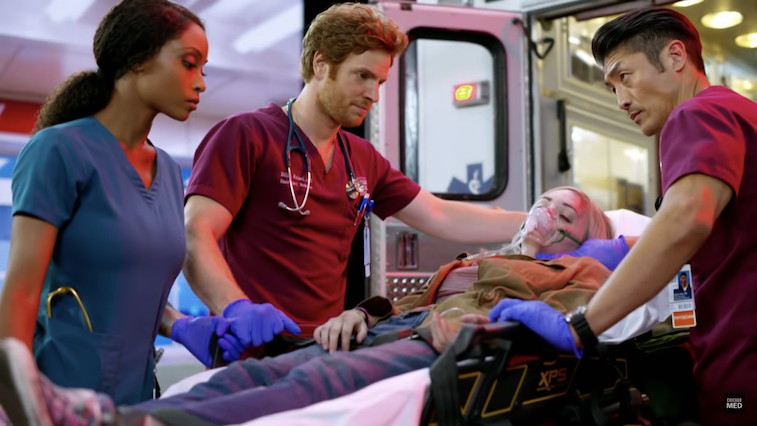 The remarkable S. Epatha Merkerson plays one of the lead characters on Chicago Med, and she’s also one of the most renowned actors on the series. Her nine-year run as Anita Van Buren on the critically acclaimed Law & Order saw her nominated numerous times for the prestigious Screen Actors Guild Outstanding Performance by an Ensemble in a Drama Series award. Additionally, the multifaceted actress has been featured in many big-time movies, including Lincoln, Black Snake Moan, and Jacob’s Ladder.

If you think the actor who plays Dr. Daniel Charles looks totally familiar, you’re right. Oliver Platt, who happens to be a close relative of the late Princess Diana Spencer, has portrayed a range of quick-witted characters on shows as diverse as Miami Vice, Wiseguy, Dr. Doolittle, and The West Wing prior to his gig at Chicago Med. In fact, most viewers find Pratt to be the most recognizable -and famous- actor on the NBC series.