The comedy classic Groundhog Day came out 30 years ago in February. Phil (Bill Murray) lives February 2 over and over again until he gets it right. After 30 years of Groundhog Days the film still offers some surprises. For others, Groundhog Day was a religious experience.

Sony Pictures Home Entertainment released a 30th anniversary edition of Groundhog Day on 4K UHD, Blu-ray and DVD. You might not think Groundhog Day was a visual marvel, but the 4K edition really makes it feel like you’re in Punxsutawney, PA in the cold, snowy winter. In the bonus features, the late director Harold Ramis explains what provoked religious groups to picket theaters.

The religious interpretation of ‘Groundhog Day’

Groundhog Day is not known as a controversial movie. ‘90s movies like Basic Instinct and Kids were. But, 1993, Groundhog Day attracted religious groups, fortunately in a good way.

“It opened well and the reviews were really good,” Ramis said. “By Monday, the film was playing in Santa Monica where I lived. My producing partner Trevor Albert called me and said people are picketing the theater on the 3rd Street Promenade. I said, ‘What do you mean they’re picketing the theater?’ He said, ‘Hasidic Jews are walking around with signs that say, “Are you living the same day over and over again?”’”

Ramis appreciated the religious interpretation of Groundhog Day, and they have a point. Even if we don’t literally repeat days, there are patterns in our lives. Often, we are the cause of repeated struggles and changing our attitude or behaviors is the key.

“So obviously they were using the movie as a tool for proselytizing a religious point of view,” Ramis said. “I thought, ‘Well, that’s a good sign.’ They’re not opposed to the film. They think the film is demonstrating something or saying something to the audience that they can somehow tailgate on.”

Ramis also saw the study around Groundhog Day expand beyond religious groups as the film was in wide release. Not only the spiritual idea of repeating one’s mistakes, but the mental health ramifications too. Screenwriter Danny Rubin was inspired by the eternal life of vampires and thinking about how mundane that would become. 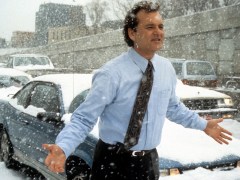 ‘Groundhog Day’: Tom Hanks Once Admitted He’s Glad He Turned Down the Movie

“Then we heard from someone we knew in the San Diego area who was a yogi,” Ramis said. “She said the yoga community love the film. Then the letters started coming right away within the first couple weeks. Psychiatrists wrote to say that the movie’s a perfect metaphor for psychoanalysis because you keep revisiting the same material over and over again, each time with increasing insight.”

The movie is for everyone

“So we sort of knew that we had this embrace from the spiritual and religious and psychological community that very few films had ever experienced I think,” Ramis said. “Instantly people were identifying the film as a teaching and in such a parochial way, each seeing it as an expression of their own particular point of view without realizing it was in fact a universal point of view.”