How Do ‘The Real Housewives’ Create Their Taglines? 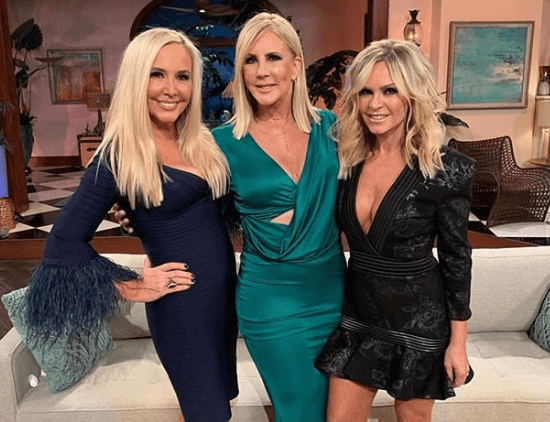 How does Bravo arrive at the perfect tagline? Doug Ross, executive producer of two Real Housewives franchises gave E News the dirt about how taglines come to life.

This is how they get started

At first, creating the taglines took a pretty basic approach. “We initially really tried to capture a moment that had happened in the show and reform it as a tagline,” Ross said. “So, they were more statements that felt lifted from the story as opposed to a tagline describing their personalities.”

But as the shows progressed, producers and cast members took a deeper dive. “As the show matured, not only did the characters mature, but [so did] our approach to how we were producing the show,” he explained. “We work very closely with the team at Bravo and it became clear that we wanted to have the taglines have a little bit more of a punch, a little bit more of a meaning to their characters.” This meant dropping breadcrumbs about what might happen in the season.

As a result, tagline discussions begin on day one.  “We actually start discussing what the potential tagline could be for each of the various ‘wives pretty much at the beginning of the season, and we kick around ideas all season long because they want their tagline to be unique and special and ones that really stand out from the pack,” Ross said. The longer the seasons, the tougher it becomes to create new taglines. “So it gets more difficult to come up with them each year, but the goal for every Housewife tagline, of course, is to not only be an accurate reflection of their personality and who they are as a person, but what’s going on with them that season in their lives,” he adds.

Do the ‘Real Housewives’ and producers sync up?

The ladies of the Garden State are back! Don’t miss the Epic Season 9 Premiere of The Real Housewives of New Jersey, Wednesday 9/8c on Bravo! #RHONJ

In typical Real Housewives fashion, even the taglines can produce a smackdown. “In some ways, that makes it helpful to work with the Housewives to determine what it could be, but it also makes it more difficult because sometimes a Housewife will want to say ‘I’m the prettiest and I’m the best and I don’t take any s—t.’ Well, yes, maybe,” Ross said. “But everyone wants to say that and it really doesn’t have anything to do with what’s going on in your story this season.”

Oftentimes producers will go back to the drawing board to find a tagline that meets both the show’s and the cast member’s needs. Ross says he’ll present something to the cast member. And if it is based on their original suggestion it will often fly.

For example, Shannon Beador from The Real Housewives of Orange County insisted on a tagline that represented her marital struggles. “She really wanted to have the line ‘The best things in life are worth fighting for’,” Ross recalls.

How many taglines are created?

In Beador’s case, the producers worked with her to arrive at a tagline that made everyone happy. They worked with Beador’s struggles but also wove in her love of feng shui and good energy. “We actually had recorded a bunch of lines, none of them seemed to work,” Ross said. Eventually, they arrived at “‘When life gives you lemons, put nine in a bowl.” Which Ross says was delivered perfectly.

Sometimes it takes several takes to get the tagline right too. “Another thing that is interesting about the whole tagline scenario is that you never know exactly which one they’re going to be able to say with the right inflection, the right meaning, so we’ll ask them to record three, four, five, or six—each sort of variations on the theme or hitting on different parts of what’s going on in their life that season,” Ross said. “Sometimes, they’ll just be able to nail one better than the others.”

Which are some of the best?

When your own initials are enough buy @quiltedkoala bags!!! LOVE MINE! Sooo chic and you can monogram! Blouse by @kobihalperin Pearl necklace by @michellefarmerdesign. Butterfly necklace by @phoenixrozenyc All styling done by @thestyleduo thank you !!! #swipe to see @mattdillon1983 and kids! #reunion

The best taglines are pretty subjective. Some hilarious ones include: “Are the police involved,” for Lauri Waring from The Real Housewives of Orange County. Also,” 85% of the women around here have had breast implants,” from RHOC alum Kimberly Bryant.  Then there is “When people tell me I’m fake, I know they’re just pulling my leg.”  The Real Housewives of New York City’s  Aviva Drescher.

While Bravo holds the master tagline list you can also create your own.